Hanoi, a city infested with scooters

“Oh you’re going to Hanoi? You’ll see stray dogs all over the streets in Southeast Asia. Except in Vietnam. You know what happen to stray dogs over there? They catch them, and they eat them. The few dogs you’ll see will be keep on a leash“. That’s what a Lao guy told me in Luang Prabang, when I announced that I was going to Vietnam, and that my first stop would be its capital, Hanoi. He wasn’t wrong. Since my stay in India, I’m used to see doggies hanging around outside. But here, in Hanoi, not a single dog. In Vietnam, except in Hoi An, I didn’t see a single stray dog.

Here I am, in the capital of Vietnam, Hanoi. I really thought I wouldn’t be able to get in the country. The customs officer questioned me for at least 15 minutes, but he never lingered on the other ones for more than 30 seconds. He checked my passport 10 times, scrutinized my face, asked me to stare at him… I can get why I faced this kind of situations in Kiev, Ukraine… But in Southeast Asia, where people are open-minded and used to see thousands of backpackers!? Nope, I wasn’t expecting this!

You understood reading the title of the article : the city is infested with scooters. And yes, I’m using the term “infested with”. They’re all over the place! Actually there are so many scooters that it’s really complicated to cross the street. It reminded me of Tehran, Iran. You have to impose yourself, otherwise it’s impossible to cross the street. Moreover there are very few red lights, it doesn’t help! Hanoi is a hectic city. Horn blasts are incessant, guys on their taxi-scooters constantly call me out like in Thailand (oh man, I didn’t miss this!), and shops and street food stalls take over the sidewalks… Therefore it’s also difficult to make your way through on the sidewalks. Hanoi is a lot more hectic and noisy than Vientiane, the capital of Laos.

In Hanoi, a lot of people stare at me in the street. Once again, I wasn’t really expecting it in Southeast Asia. They come up to me and say hi, they ask where I’m from. Mostly children and teenagers, or adults over 50. I was quietly having lunch in a restaurant with locals only, and I was the attraction of the establishment. Everyboday was staring at me with curiosity. It really surprised me, Hanoi is probably the city in Southeast Asia where I ran into black people the most often!

Since we talk about restaurants, I noticed the beer is reaaally cheap there (one euro or less). I know we’re in Southeast Asia but still! Even for this area, I thought beers were not expensive at all. After a few days, I also noticed that in many hostels, the beer is free at specific hours (for instance : free at 6pm and 10 pm until end of stock). “Hmmm… There must be a reason!” I thought. And I remembered everytime I was eating in a restaurant, waiters were asking me right away if I wanted a beer, and sometimes they brought me one without asking! I finally found out later why. The beer is brewed there, and for a reason that escapes me, they have to get rid of it within 24 hours. Hence the very low prices.

As I said, it’s hard to walk in the streets of Hanoi, but I came here to visit the city! Right in the city center, you’ll find the Hoan Kiem lake. Although it’s located in the center, this place is relatively quiet. The elderly have a walk around the lake, sit on a bench and watch people passing by, some of them go fishing… On this lake, there’s the Ngoc Son Temple. It’s 30000 dong (1.10€) to get in, and inside you’ll see Vietnamese works of art. On the lake, you can also spot the Turtle tower. The turle is an emotional symbol of Hanoi. During the 15th century, a farmer lent the king a sword he found in the lake. Thanks to this sword, the king managed to get rid of the Chinese invaders. And one day, a turtle emerged from the lake to get the sword back!

You can also visit Van Mieu, also called the Temple of Literature. This temple was built in 1070, and it’s actually Confucius mausoleum, the Chinese philosopher. You can mainly admire its five courtyards, and an altar where you can see Confucius and its disciples. It’s 30000 dong (1.10€) to get in.

The imperial citadel of Thang Long is also worth a visit. Basically the political power of the region was here, it was the seat of various dynasties, but it was also the cultural and economical center of the region. In this imperial citadel, we can see various towers, buildings, there’s a big park and even a military building which was the HQ of the Vietnamese army until 1975. It’s 30000 dong (1.10€) to get in.

The Ho Chi Minh mausoleum, founder of the democratic republic of Vietnam, is located in the center of the Ba Dinh Square. Guards keep a close eye on the building, and one of them make sure tourists don’t cross the white line on the ground! The mausoluem is open from 9am to noon, but I went there in the afternoon. 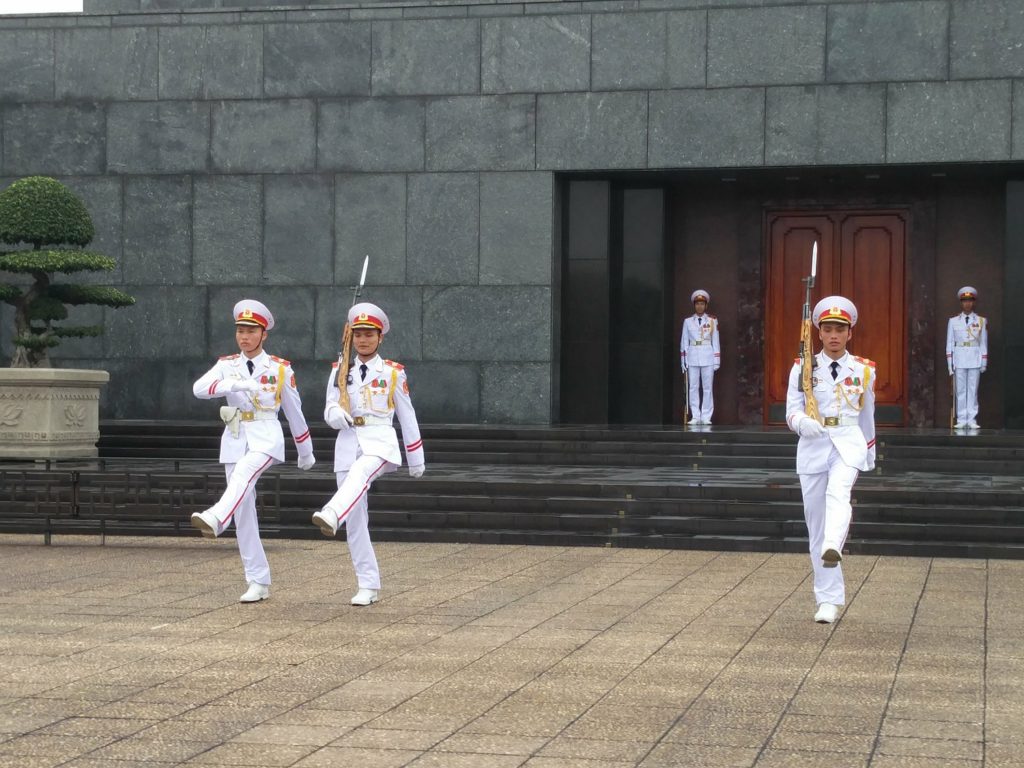 Otherwise, not too far from the Hoan Kiem lake, it’s possible to visit St. Joseph’s cathedral, see the Long Bien bridge (buily by the frenchies), and of course eat at one of the night markets… If you go to Vietnam, I think you should stop by Hanoi, but it’s not necessary to stay there for too long… In my case, the problem was the weather when I was there, it kept raining…