Things to do in 3 days in Kiev

Some links are affiliate links, which means if you make a purchase through these links, I earn a commission, at no extra cost to you.

Just like in Moldova, my 3 days in Kiev didn’t start out well. The customs officers are used to see in front of them hundreds of passengers. They quickly watch each passport, stamp them, “Next!” and so forth… 30 seconds maximum per passenger. Then comes my turn… The customs officer literally stays 15 minutes with my passeport, skims through each page, examines the photo and then looks at my face, takes out a magnifying glass and scrutinizes my passport to make sure it’s not a fake one, asks me a lot of questions… People behind me start to lose patience, I see them changing line. Since he doesn’t have good arguments and no valid reasons to prevent me from getting in the country, he finally stamps my passport and, with no smile, says “Welcome to Ukraine.”

With no smile. It’s not very different from Chisinau, in Moldova, where people all sulk. In Kiev, it doesn’t look better. And the check in at the hostel put me in a bad mood. The owner doesn’t speak English (the height of absurdity when you manage a hostel!), was aggressive towards me and wanted me to pay immediately “MONEY!!!“, wasn’t smiley nor helpful and the cleanliness of the hostel was questionable. To top it all off, the doors close at midnight, and reopen at 7 in the morning (it clearly stated on Booking “reception open 24/7“). After midnight, if you’re not back “home”, you’re fucked and you have to wait ’til 7 to get back in (it happened to a Spanish guy!). All right, let’s go out and get some fresh air. I’m not too far from Saint Sophia’s cathedral, actually, after a 10-minutes walk, I’m almost already there!

I barely have time to admire this beautiful cathedral, a young guy dressed up as Baloo flings himself at me, asks 2-3 basic questions (where are you from? etc…), and then proposes to take some pictures with him. Actually he insists and he wants me to take pictures with him. Ok now I understand. He’s gonna ask me for money afterwards but all right, let’s do it… Another guy shows up. I didn’t see him first, that’s his colleague, dressed up as Aladdin. He wants me to take a picture with him too (and of course get some money after that…).

After the pictures, Baloo starts questioning me. “Why are you coming here in Kiev? What are you doing here? You’re not scared?” And then the complaints… “It’s hard to find a job here. Look at me, I have to entertain the tourists, and to disguise myself under the sun (it was like 35°C/95°F that day). And I don’t earn that much money. What is your job in Paris? How much do you make? Do they hire people from Ukraine in your company? Economy is really bad now here, etc…“

Problems with Russia and EU in Ukraine

What happened? Why did the Ukrainian economy collapse the last few years? If we take a look a little closer, it really began to deteriorate around February 2014. It is exactly when Victor Ianoukovitch, then president of Ukraine, fled the country. There had been public protests in the country for the past three months because Ianoukovitch abruptly changed his mind on an Association Agreement with the European Union, deciding to strengthen economic ties with Russia instead. Hundreds of thousands of people joined the protest, there had been violent confrontations between protesters and the police, and 80 deaths because of the conflict (you can see pictures of the victims on Independance Square). The revolt got uncontrollable, Ianoukovitch decided to flee (to this day, we still don’t know where he is), and since then the country is a mess.

To top it all off, at the same time you had Russia’s annexation of Crimea and the southeast part of Ukraine (Donetsk, Mariupol…) under Russia’s control. Yes, you start to understand why Ukrainians are in low spirits. The thing is, for those who used to live those areas (Crimea, southeast of Ukraine), they had no choice, they were asked to leave (“Either you’re Russian, or you get out of here!“). A lot of them had to leave everything they had (houses, etc…) and “migrated” to Kiev. 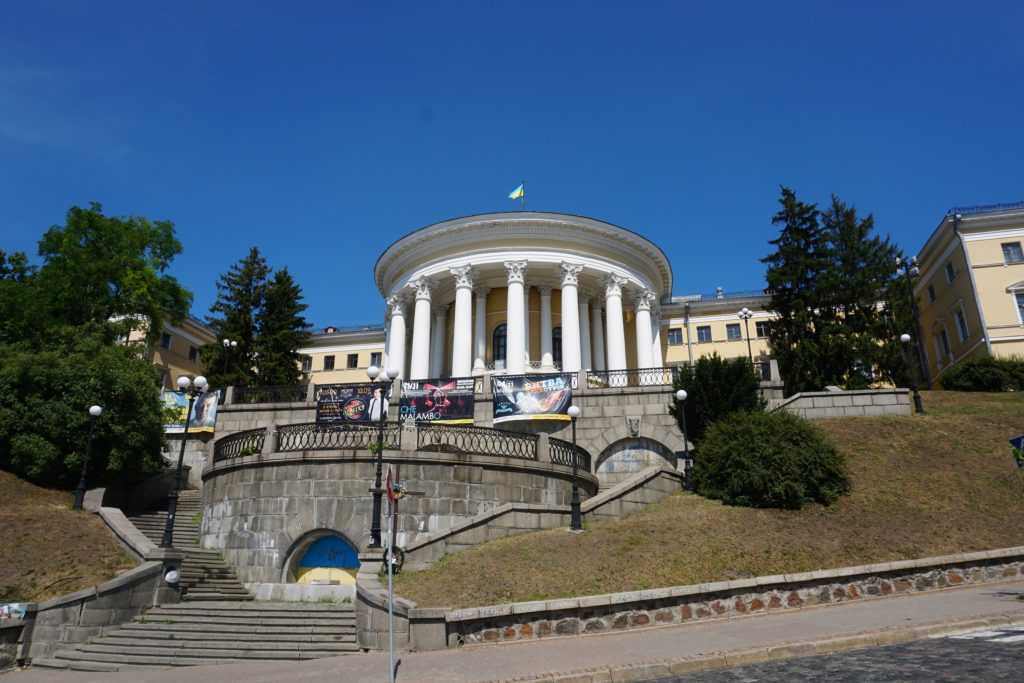 This explains a bit their gloomy and sad faces. I start wondering if it was actually a good idea to come here. The day before I got in Kiev, a mysterious cyberattack crippled Ukraine. But most importantly, that same day, an Ukrainian military official was killed in a car bombing, in the city center! “No worries, said a Moldavian guy. In Ukraine, the attacks have identified targets. Not like in your country, France, where anybody can die. Nothing will happen to you.” Yeah…

No black people in Kiev

Not reassuring. And damn the people there! They all sulk! Moreover they don’t look like they’re happy to see me. Almost all the guys I pass by stare at me. Not surprised looks (like in Belgrade), but angry looks, glaring at me. They wanna know if I’m looking at them as well, but my eyes are hidden behind my shades. “Yes, they’re racist here. Not like in Russia, but they don’t like foreigners. Try not to look at them if they keep staring at you, some of them might take it as a provocation and start to fight“. This is what told me a French girl living in Kiev for the last three years. All right… It hasn’t fallen on deaf ears.

Hmmm… What about taking a walk? There are foreign exchange counters everywhere! At the dry cleaner’s, the supermarket, the local IKEA… There’s always a little counter where you can change your money. At the market, they were selling toilet paper with the face of Putin on it (couldn’t take a picture…). And… Oh! A black guy! He saw me first, we did the black nod, and he immediately came up to me “Hey! Wassup? Where you from? Etc…” We talk for like five minutes. “I don’t like here either, fortunately I’m just here for a few days” he said.

Things to do in Kiev

Kiev is still a beautiful city, it’s just the general atmosphere that I didn’t really like. Wanna go there? There are some nice places to see. First thing first, Saint Sophia’s cathedral, one of the most famous monuments in Ukraine, inscribed on the UNESCO world heritage list. Very beautiful cathedral, and so impressive!

Another place on the UNESCO world heritage list is Kiev Pechersk Lavra. It’s one of the biggest museum in Ukraine, and also an important orthodox monastery. I heard a lot about this place before going there, I have to admit I was a little bit disappointed…

Last but not least, a place I really wanted to go but couldn’t make it, Mezhyhiria, Victor Ianoukovitch’s palace, the former president who fled the country. After leaving, his villa has been transformed into a museum open to the public, and this is where you find out the extravagant lifestyle Ianoukovitch had. The toilets are made of gold, the billard room too! He had his private zoo, his golf course, an extensive collection of cars, his helicopter pad, expensive chandeliers… This palace required daily maintenance costs of 75000 US dollars! And a staffing level of 2000 people! For those who wanna go there, the villa is 30 kilometers (20 miles) away from Kiev, and several marshrutkas (minivans) go there from the subway station Geroyev Dnepra (no pics, haven’t been there…).

All right… After spending 3 days in Kiev, I wasn’t sad to leave the city. Those who have been there, do not hesitate to tell me what you thought about it. I met a lot of people on the road after leaving Kiev, and I was the only one who had a negative experience. I read several articles from travel bloggers who went to Kiev, and they all looooooved it (honest? I don’t know…). Fortunately, I went to Chernobyl, and I loved the experience. Click here for more info. So yeah, the city is beautiful, but that’s it. Now let’s go to Odessa, still in Ukraine, by the Black sea. Let’s hope it will be better…

If you plan to stay a bit in the country, check out my post listing the places to visit in Ukraine.

How to get to Kiev

The easiest way to get there is by plane. Click here to check the latest flight prices.

How to get around in Kiev

If you’re in the city center, you can get around by foot. Otherwise take the subway, you have to see it! It’s the deepest subway in the world (100 meters/328ft. underground). The stations can be used as nuclear shelters.

Where to stay in Kiev

I wrote a book