Let’s face it, Vang Vieng is the kind of city where people mainly go to party. I was in Luang Prabang just before, and I felt like it was a party place. But actually it was nothing compared to what I was about to see in Vang Vieng…. Korean, Australian and European people who were there to drink, to test out new drugs and party ’til the break of dawn. I have to admit I didn’t know Laos was a country where people go to have fun, and Vang Vieng is probably the city where you can witness all kind of excess in Laos. How come?

Initially, Vang Vieng was a rather quiet Laotian town. But in the early 2000s, the construction of hotels, bars and clubs transformed the city. It brought a mass influx of backpackers in Vang Vieng, and it started to distort the beauty of the city. I said it in my article about Chiang Rai, we’re in the golden triangle. Drugs were very easy to find (it’s still the case to this day) : weed, opium, crack, mushrooms… 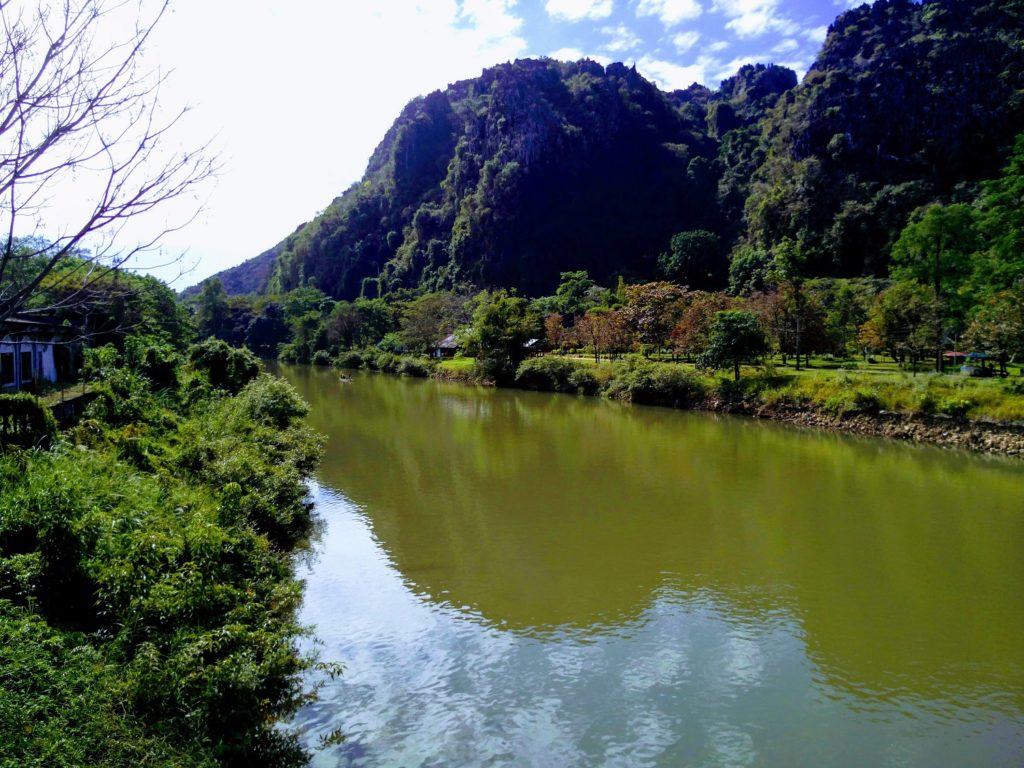 Imagine Westerners going there to have fun, to party, to drink, to test out drugs, and let’s not forget the herd instinct… There was a time when Vang Vieng was called “the tourism cancer city” or “the Cancun of Asia”. It had a reputation for more debauchery than some places in Thailand. But above all, in 2011, at least 27 tourists died in this town. Due to drowning or diving head first into rocks. And I don’t even count all the backpackers admitted to hospital : broken bones, infected gashes, sickness caused by alcohol intoxication or drugs. Most of the accidents occured while the backpackers were tubing. Wait… What the hell is tubing!?

The concept of tubing is simple. You rent a rubber tube, head to the start of the tubing route on the river, jump in your tube and start floating, following the river’s current. And why is it dangerous? There are different bars along the river. From your rubber tube, stop and head to a bar, have a few drinks, jump in your tube and follow the river’s current again… ’til the next bar, stop again, have a drink (or two!), and so on… You get it, after 3 or 4 stops, you start to lose control. At the bars, there are not just drinks but also music, a dancefloor, various activities and games… Hence the deaths and injured people. Just to have an idea, take a look at the video below.

Face with this situation, the Lao governement reacted in late 2012. There was a punitive raid, and they burnt almost all the bars along the river. There are still a few bars, but a lot less than before. And it’s still possible to go tubing and to have fun, but it’s nothing compared to the madness of the 2000s.

For those who are going to Vang Vieng and really want to party, no problem! It’s possible to party in a more classic way : go on a club/bar crawl! The most popular is the Sakura Bar. A big club with a dancefloor, loud music and cheap alcohol! Why is the Sakura Bar so popular? It’s possible to play beer pong, but most importantly, from 8 to 9pm, the whisky is… free! Since you don’t pay to drink whisky, it attracts a LOT of people. Otherwise, you can go to the Viva Pub, or the Smile Beach Bar. It was funny to see the Korean so shy in the early evening and going wild after a few drinks! The Sakura Bar sells T shirts with “Sakura Bar” written on it, or they give them for free if you buy two drinks (no one goes there just to get one drink). Therefore, everyone has the Sakura Bar T shirt. The funny thing is when you leave Vang Vieng and you run into someone who wears the T shirt “Hey! When were you there? I also partied in this bar!” I bumped into and talked to people who were wearing the T shirt in Vientiane but also in Hanoi and Phnom Penh, in Ubud, in the Gili Islands and in Palawan Island in the Philippines!

Anyway, let’s try to see what’s going on beyond the parties, the alcohol and all the drugs… What can we do in Vang Vieng? There are mainly caves to visit in the city. I first went to the Tham Chang Cave. Many steps to climb to get there, and rare enough to be worthy of note, inside the cave is quite beautiful! This cave reminded me of Hpa An in Myanmar, but this one is smaller. You have to pay 2000 kips (0.20€) to enter the gardens surrounding the cave. I was on a bicycle, so I had to pay an extra 2000 kips… The entrance fee for the cave is 15000 kips (1.50€).

Another popular cave in Vang Vieng is the Tham Phu Kham Cave. This cave is a bit further, and this time you have to climb rocks to get there. For some people, it can be long and not easy. Anyway, this cave is very dark, so it’s possible to rent a lamp for 10000 kips (one euro). Not necessary, the flashlight of your smartphone will do the trick! This cave is really big, dark, and the ground is slippery, be careful. I only visited a small part of the cave, therefore I can’t say much about it. It’s 10000 kips (one euro) to get in, and it’s possible to ask for a guide (it’s 50000 kips -5 euros-). FYI, on your way to the Tham Phu Kham Cave, you’ll have to cross a bridge, the namsong bridge. And you have to pay to cross this bridge… 6000 kips (0.60€).

Like Chiang Mai, Vang Vieng has a host of activities : kayak, rafting, rock climbing… But as I said, even though it’s not what it used to be, tubing is still very popular. I didn’t really wanna do it, thinking about all the things I heard before “It’s dangerous, some people died there, tubing is for those 18 years old drunk Australians, etc…”. But the group I was with was stronger than me, and I tested tubing. I have to tell you, I loved it! We were a group of 15 people, and we had a ball! It just goes to show! In life in general, just test out things to make your own opinion! I didn’t have my camera nor my smartphone, I didn’t want to take any risks. So here we go, another video! This one was shot in 2010, it wasn’t that wild when I did it.

Vang Vieng is the place to be when it comes to party. However, if you’re not into clubs/bars, you can skip this place…