Visit to the Gili Islands

This article recounts my stay in the Gili Islands, which took place before the earthquakes of past summer. The Gili Islands were temporarily closed to the tourists. From the information I found here and there, it’s now possible to go there but the islands have been severely damaged, especially Gili Trawangan.

The first time I heard about the Gili islands, it was a few years ago at work. A colleague went there on vacation and he loved it! He was telling me how great the islands are, he was also telling me that there’s something for every taste there, that he spent most of the time on Gili Trawangan where he partied all night long, and talking about parties, he kept telling me “They’re craaazy over there!!!“ I remember checking on Google Maps and discovering three tiny islands in the middle of the sea. Fast forward to my trip in Southeast Asia! Here I am, ready to visit the Gili Islands! As I was on the road, I kept hearing about those islands more and more often. But what are the Gili islands?

The Gili islands are three islands located northwest of Lombok : Gili Trawangan, Gili Meno and Gili Air. In fact there are other Gili islands, like Gili Asahan or Gili Gede, more on the south of Lombok. But when we talk about the Gili islands, we refer to those three : Gili Trawangan, Gili Meno and Gili Air. Therefore, some people feel like visiting one island only, others visit two of them, and some people want to see all three of them. In my case, since I had time, I decided to visit the three islands.

So I went to one of the numerous travel agencies in Ubud selling tickets to go to the Gili islands (I give all the information at the end of the article), and the day after, a van picked me up. One hour and a half later, we made it to the port (in Padang Bai), from which we’ll go to the Gili islands. We were like 100 backpackers there, and as we were waiting to get on our boats, the locals asked all of us where we were going, and put a sticker on us with our destinations written on it. I looked around me. 90% of the people were going to Gili Trawangan. The other ones were going to Gili Air. I also spotted two people going to Lombok, but no one going to Gili Meno! I decided to start my visit of the Gili Islands with Gili Trawangan. Let’s see how it is…

Why almost all the backpackers around me decided to go to Gili Trawangan? Actually, Gili Trawangan (also called Gili T) is the place to be if you wanna party! Out of the three islands, it’s the largest one (with an area of 3.4km²), and it’s by far the most bustling! There’s a small hill in the center of the island from which you can see the other Gili islands but also Mount Rinjani in Lombok.

Indeed, there’s an impressive number of bars and clubs in Gili Trawangan : the Sama Sama Reggae Bar, the Ombak, the Jiggy Bar, the Lava Bar, the Evolution… You have many options! Nighttime, around the bars, numerous locals sale all kind of drugs : weed, ‘shrooms, ecstasy… There’s even a guy who tried to sell me condoms when he saw me passing by with a girl!

I found something a bit weird on the Gili islands (I already noticed the same thing in Luang Prabang, Laos) : having mushrooms seems somewhat normal, while you’ll be the worst junkie ever if you consume weed. In Western countries, it would probably be the opposite. It must be cultural. Anyway, getting mushrooms is so damn easy but please don’t forget consumption and possession of drugs are forbidden (even though everyone blatantly consume drugs there). Police raids are a rare occasion, but they do happen! 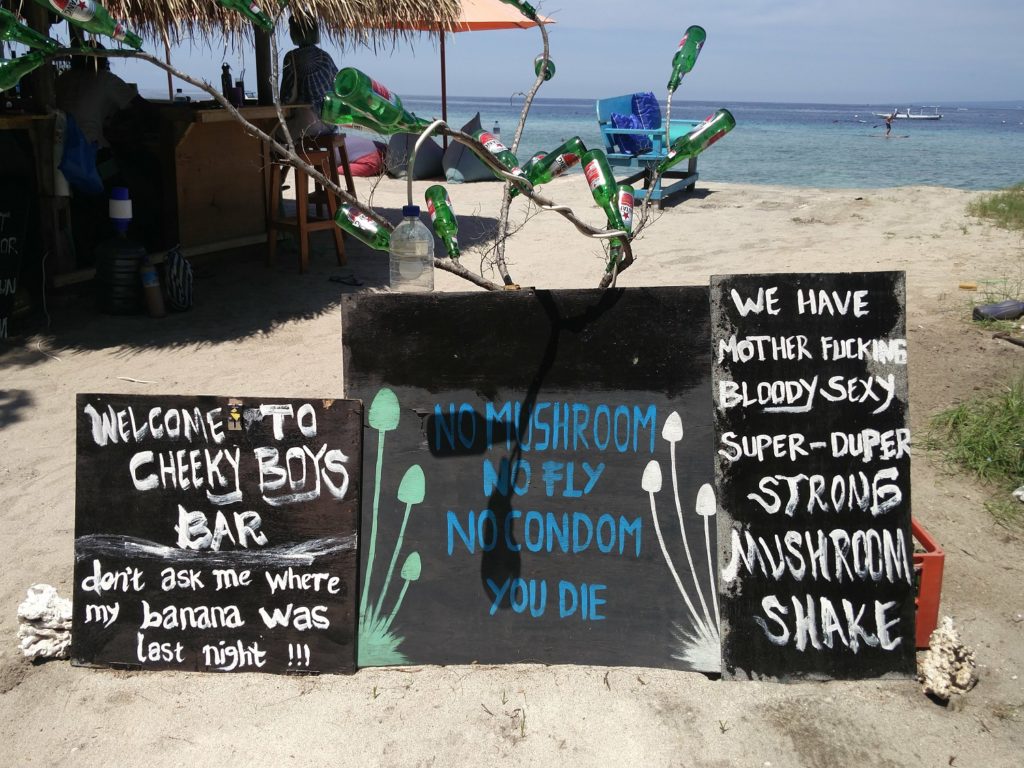 You’ll quickly notice that just like the city center of Hoi An in Vietnam, there isn’t one single motor vehicle! Not just in Gili Trawangan, but in the entire Gili islands. It means you won’t see a single car there, not even a scooter. To get around, you have to walk or rent a bicycle, it’s like 40k rupees (less than 3 euros) per day. You can also hail a horse cart, but I didn’t do it. Anyway, as I said earlier, Gili T is so small, it takes less than two hours to walk around the whole island!

So… Apart from drinking and having drugs, what to do in Gili Trawangan? Enjoy the stunning beach of course! Otherwise, you can go snorkeling, that’s what everybody does! You pay 50k rupees (3 euros), and you can rent the equipment to explore the seabed! I spotted a few turtles! You can also go scuba diving. I didn’t do it but a lot of people told me Gili T is not the ideal place for scuba diving since the seabed is damaged because of fishing among other things… Just be careful, there are jellyfishes in Gili Trawangan, don’t hit the road without a travel insurance! Here’s why you should buy travel insurance! 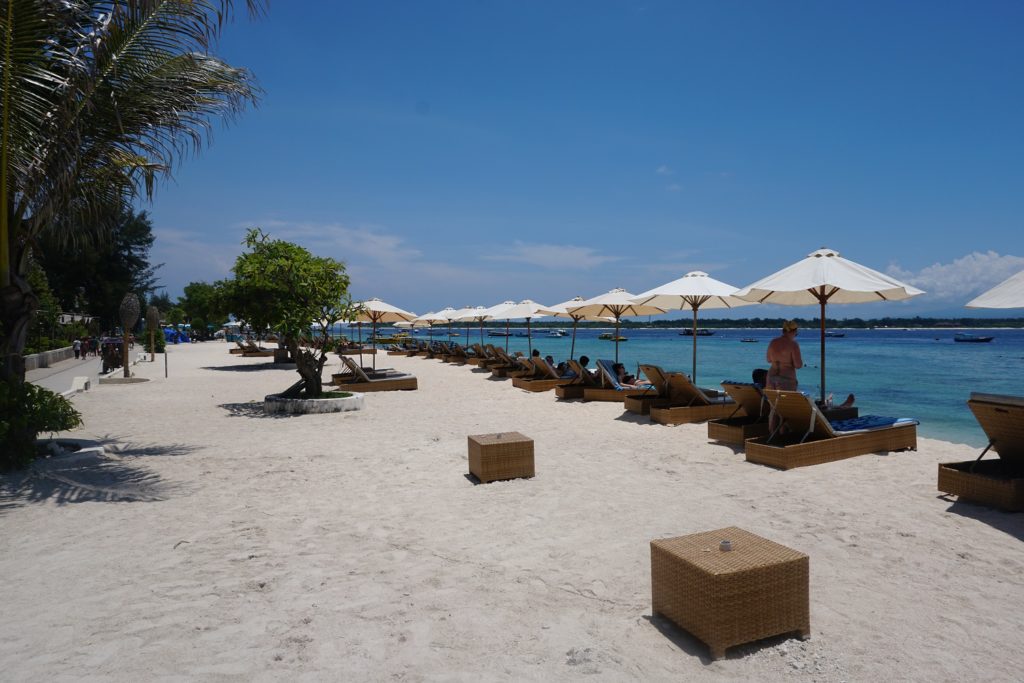 There are also cooking classes, by the way I suggest you to go to the night market, where you can eat great food and pay less than one euro. Otherwise you can get a massage. I got a really nice Balinese massage, and I only paid 100k rupees (6 euros).

Finally, don’t miss the sunset in Gili Trawangan, wonderful! The best are to enjoy the sunset is southwest of the island, between the Sunset Paradise Bar and the Exile Gili Trawangan guesthouse. By the way, this is when you’ll go on the west side of the island that you’ll realize that everything is concentrated on the east part of Gili T! The west part is a lot quieter, it’s less crowded and it’s just as beautiful as the east part. Although Gili Trawangan is a small island, I found a few areas with not a single tourist (not along the beach). It’s time to visit Gili Meno, the island where no one decided to go.

Oh man… That’s the first thing you’re gonna notice if you arrive from Gili T.  Gili Meno is quiet. Very quiet! It makes a change from the craziness of Gili Trawangan. Actually Gili Meno is the quietest of the three islands and over there, you’ll mostly see couples and families. There’s almost no backpackers.

Out of the three islands, Gili Meno is the smallest one (1.5km²), and it’s the only one with a freshwater lake. Like in Gili Trawangan, you can rent a bicycle, go snorkeling, go scuba diving, enjoy the beach… In the evening, the island is so quiet that you can hear the music from the clubs in Gili Trawangan! 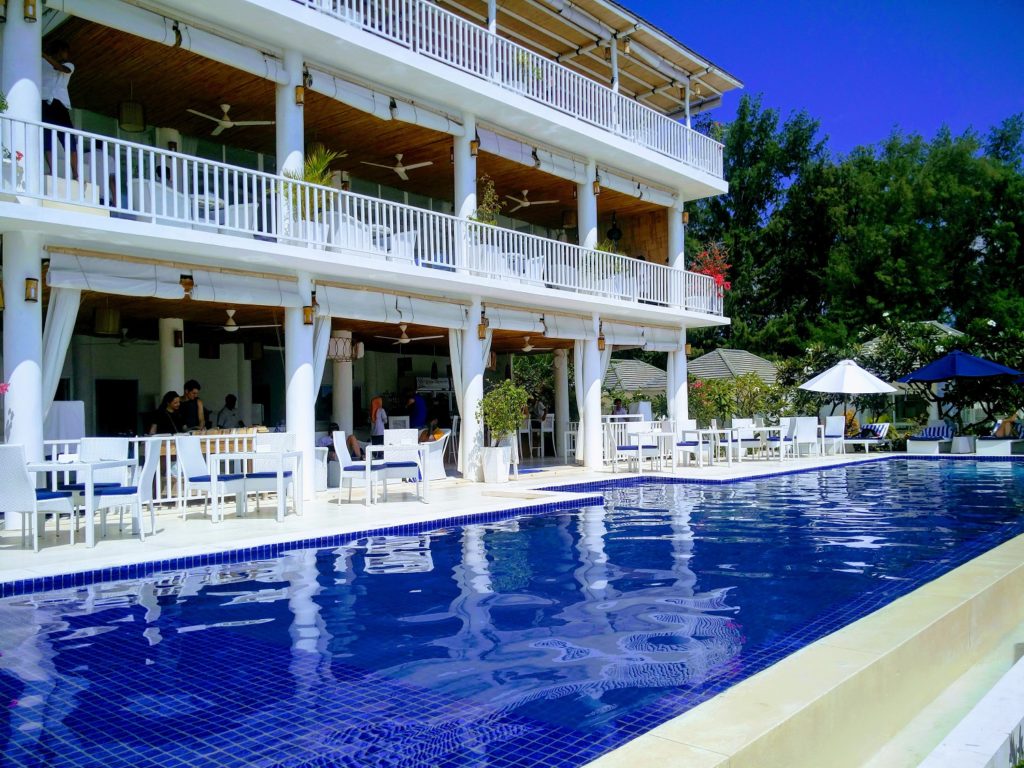 From a touristic point of view, Gili Meno is the least developed island. Since there are less tourists, all the activities are cheaper than the two other islands. For instance, going snorkeling is twice cheaper than Gili Trawangan. Go horse riding costs 600k rupees (37€) per hour in Gili Trawangan,  450k rupees (28€) per hours in Gili Air, and 350k rupees (21€) for two hours in Gili Meno! 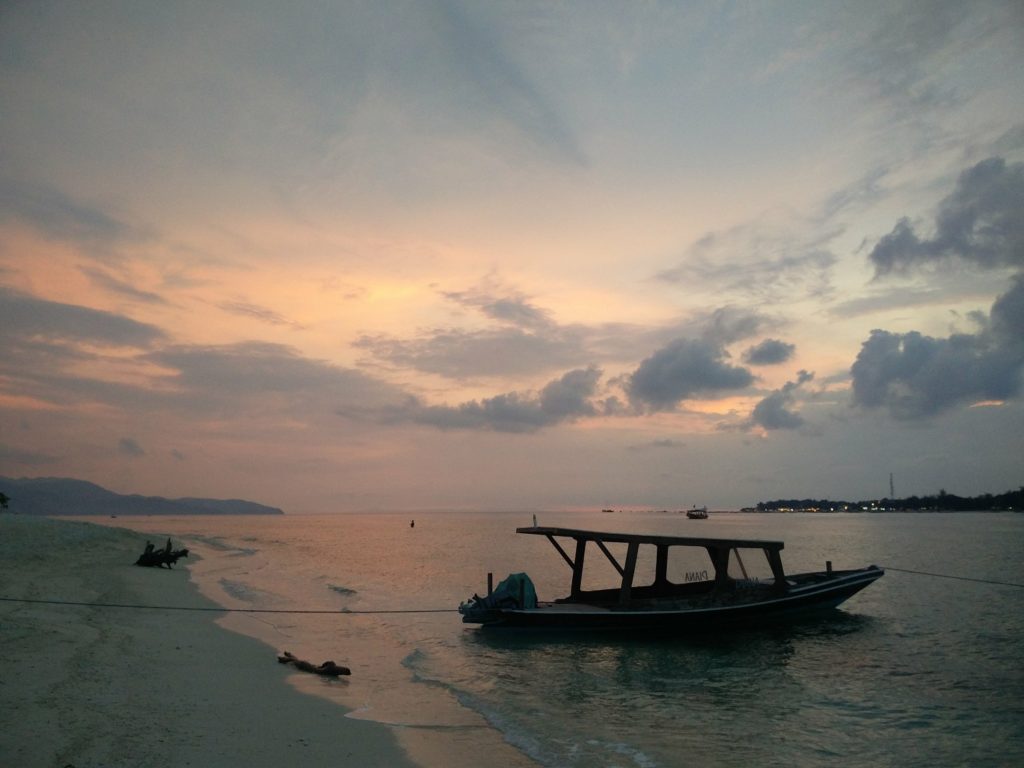 Since there are not many tourists, many locals were greeting me as soon as they spotted me walking around in the island. But honestly, apart from going snorkeling, there’s not much to do. Admittedly there are more yoga classes than Gili Trawangan, but otherwise the island is a bit too quiet for me. Still, I had the opportunity to savor delicious dishes at the Sasak Café, but also at the Diana Café. Anyway, let’s go to Gili Air!

In Gili Air, I immediately noticed there are more people than Gili Meno, but it’s not the craziness of Gili Trawangan! I started seeing again locals selling mushrooms, I didn’t see a single one in Gili Meno. In Gili Air, they sell a lot of handicrafts, I didn’t really see that on the two other islands.

In fact, Gili Air (1.9km²) is kind of transitional between Gili Trawangan and Gili Meno. It’s not the debauchery with alcohol, drugs and music all night long, but it’s not an island as quiet as a cathedral either. We’re right in the middle : it’s possible to go out for those who want to, but it’s also possible to have some peace for those who’re not in party mode. 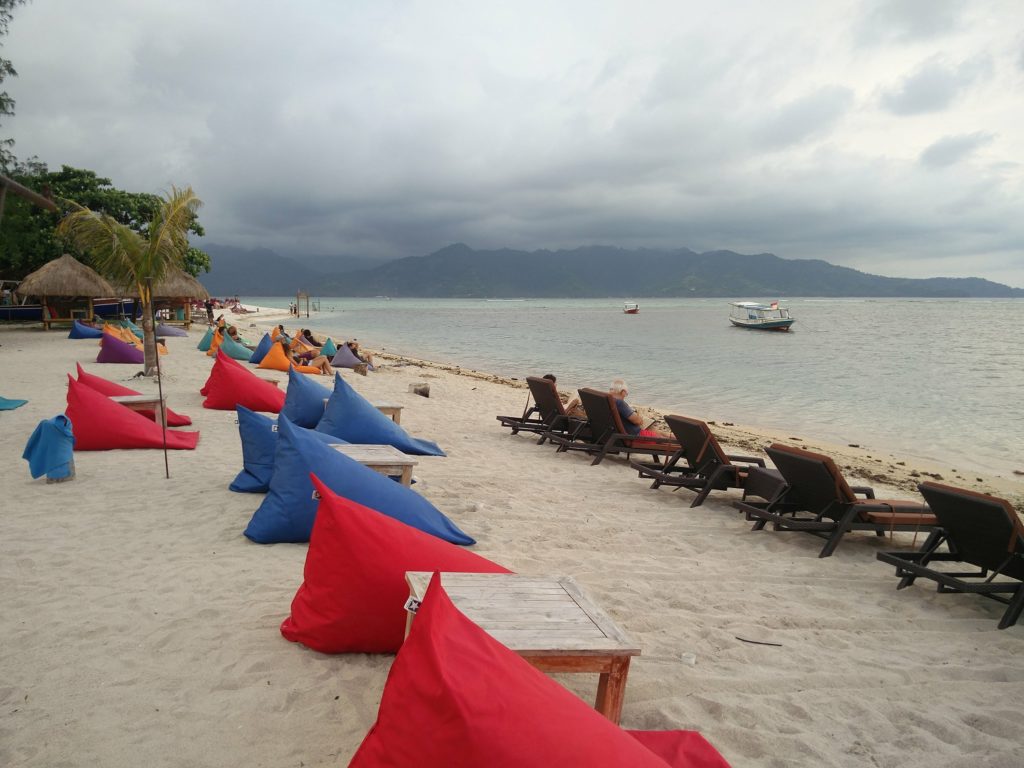 Like the two other islands, you can go snorkeling, scuba diving, kitesurfing, try meditation, rent a bicycle… But out of the three islands, Gili Air offers the least beautiful beaches. In Gili Air, I met a lot of French people! And numerous hotels were under construction when I went there. 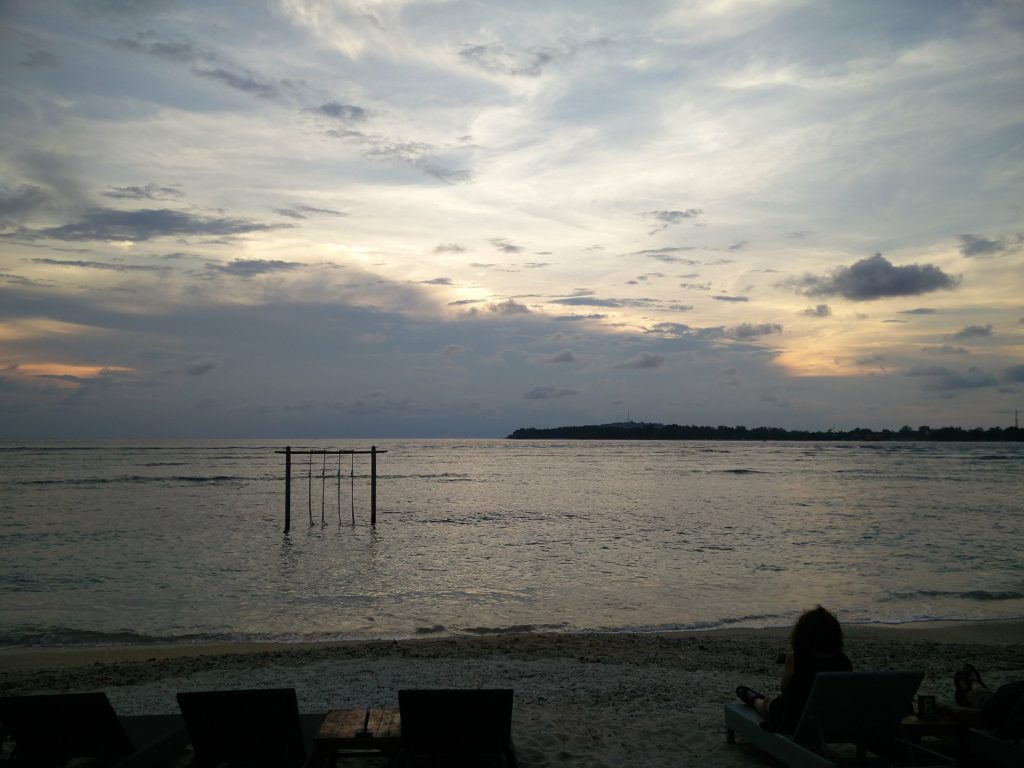