“Opium, ecstasy, weed, MDMA, mushrooms… My friends, you can have whatever you like!“ This is one of the first sentences I heard when I arrived in Laos, before reaching Luang Prabang. I left Chiang Rai in Thailand in the morning, we stopped one night in a village in Laos to spend the night, before hitting the road again the day after, to go to Luang Prabang. And that guy welcomed us offering all those different drugs… 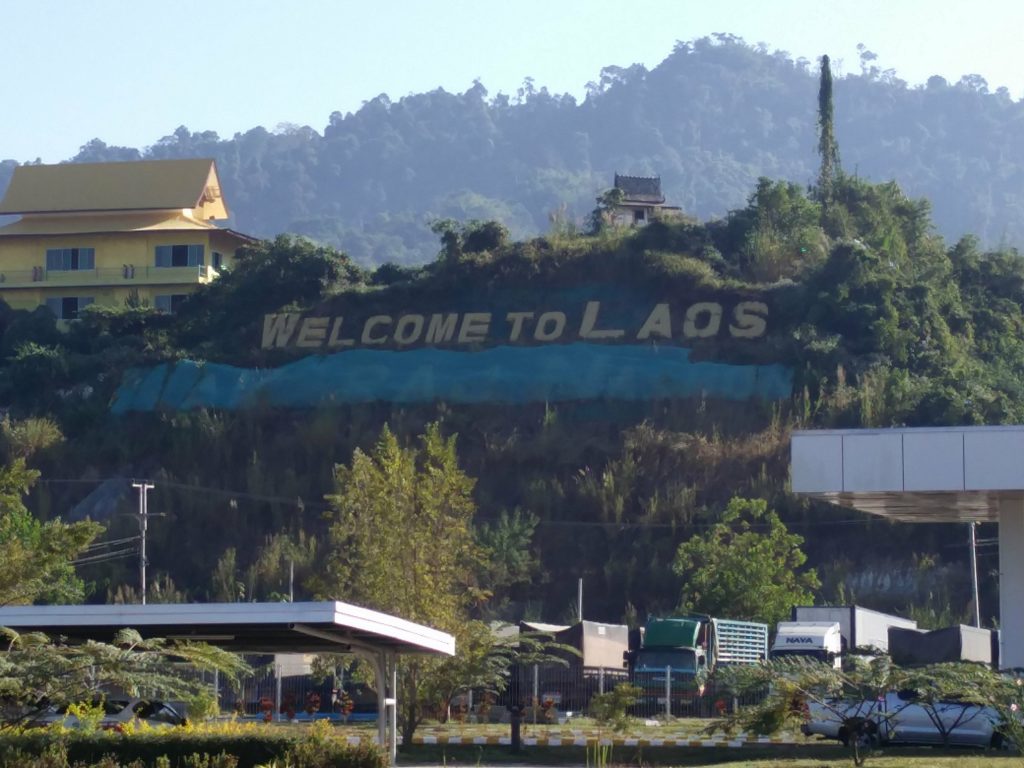 I didn’t know it but Luang Prabang, and Laos in general, is a country where people party a lot. Not just the tourists, but also the locals! Alcohol is cheap, and it’s so damn easy to buy drugs. It’s not hard to find weed in Luang Prabang, I’m telling you! This is definitely not my thing but I saw maaany backpackers buying opium, mushrooms… In Luang Prabang, I learned a few code names. 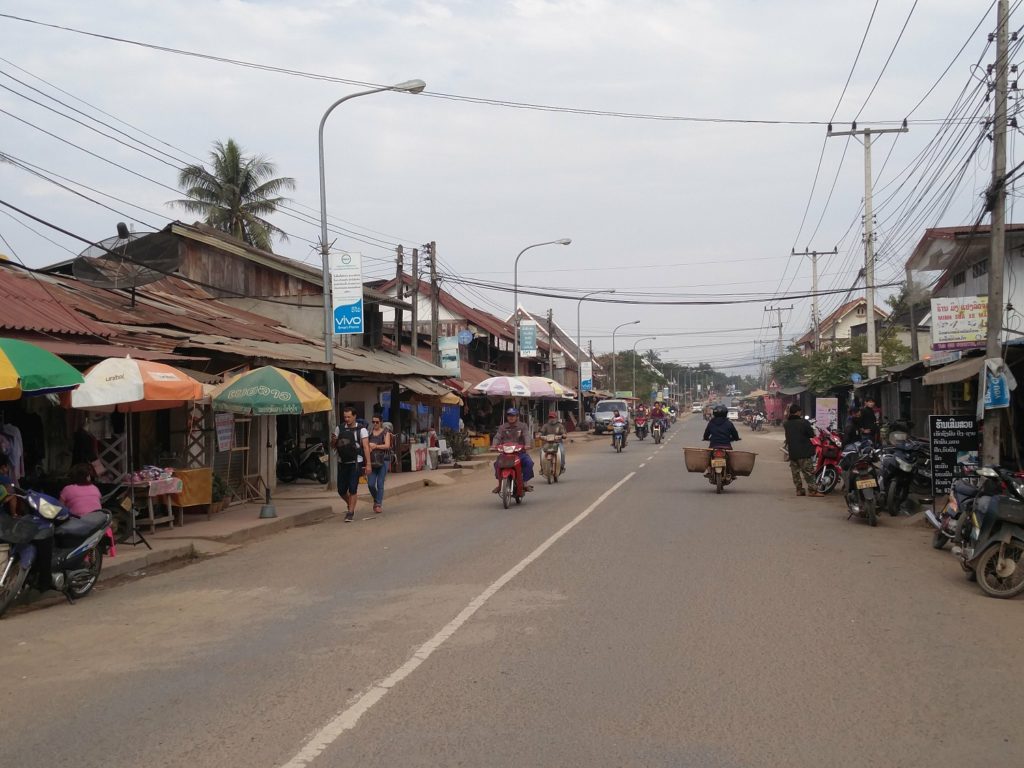 When you go to a restaurant or a bar, if you order something named “happy something”, that means there’s drugs in what you just ordered, usually weed. In some restaurants, I saw on the menu happy tea, happy pizza, happy mojitos, mushroom shakes, happy shakes and a waiter suggested me to try opium coffee because after that “You have Bob Marley songs stuck in your head for two hours“. I also went to a happy bar, where most of the drinks were flavored with weed (I didn’t know this whole happy thing, but that evening, I just had ice tea!). Anyway, later on during my trip, in Phnom Penh, Cambodia, they were also offering quite often “happy whatever” in bars. That was the same concept.

Anyway, let’s forget about drugs for a minute, and let’s focus on Luang Prabang! Luang Prabang is also known as Little Paris because at the time, this small town was part of Indochina, the former French colony. And to be really honest with you, walking around in Luang Prabang, sometimes I had the vague impression to be in France! Many signs are written in Laotian and French, you’ll find bakeries where it’s possible to eat very good baguettes, viennoiseries and pastries, there are also cafés and terraces, french style… It’s crazy! It looks strange at first, but we’re actually in Southeast Asia, not in Europe!

Therefore you can see the locals on the sidewalk seating area, having a coffee and chatting with friends… I had the opportunity to have good conversations with the elderly there, and they all speak French perfectly! Laos is a little bit less touristic than Thailand, so when I arrived in Luang Prabang, people started to stare at me again, and also to greet me in the street. But the funny thing is, unlike all the other countries I visited, people were not greeting me saying “Hello!“, but actually saying “Bonjour!” in French! Even little kids!

But let’s not forget we’re still in Southeast Asia, an area with backpackers everywhere. I met sooo many people from Germany and from the Netherlands in Luang Prabang. But most importantly, there are monks all over the city. Not as many as in Myanmar, but still, they’re numerous! Every morning, from 5:30 to 6:10, hundreds of monks walk in single file in the street, and they get offering from the locals (usually sticky rice). I wasn’t really motivated at the idea of watching this, and several people told me that it wasn’t really worth it to get up if I wasn’t very motivated in the first place. But think about it! 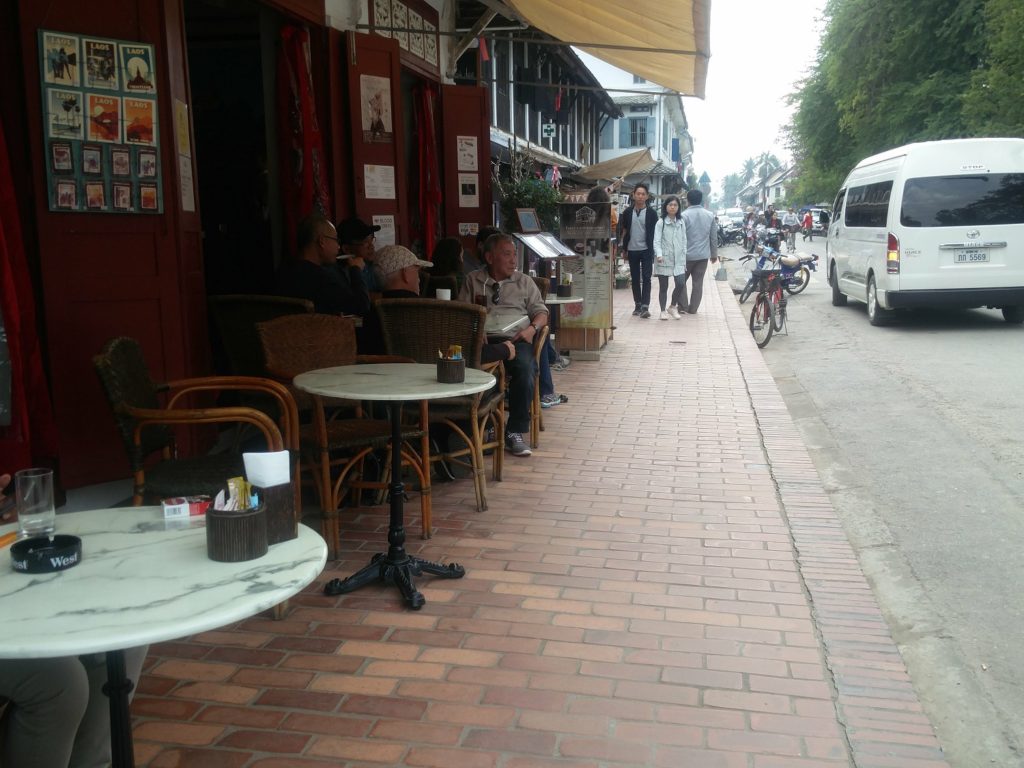 Regarding food, it’s a mix between Asian and European (especially French!). I ate at the Bamboo Garden restaurant, excellent Laotian restaurant and sooo cheap! Otherwise there’s the Bouang restaurant, more expensive because it’s Western food. It’s always full, you have to book or be there when they open, at 6pm. Between the good restaurants and the pastries… I ate a lot… Fortunately there’s a gym in the city. You just pay 15000 kip (1.50€) per session, and there’s everything you need but also locker rooms, showers… A good way to stay in shape! 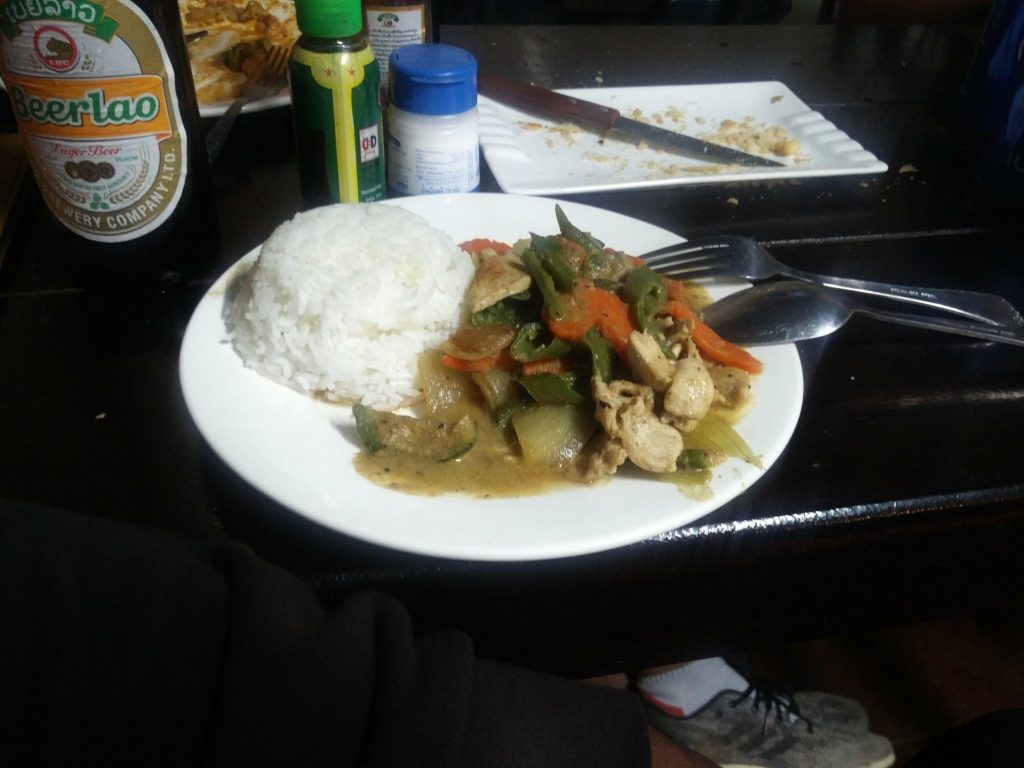 If you’re not into drugs nor food, there are a few places to see in Luang Prabang. The most popular place is actually 20 kilometers (13.5 miles) away from the city, the Kuang Si Falls. Those are wonderful waterfalls, and you just can’t miss them if you go to Luang Prabang! I wrote an article about the Kuang Si Falls! Entrance fee is 20000 kip (2 euros).

You wanna buy souvenirs, or just have dinner without breaking the bank? Go to the night market! Open every night from 5pm to 11pm, on the main street of the city, you’ll find clothes, Laotian art, lamps… And it’s also possible to eat on the spot for less than one euro! Just go, and the food is delicious!

If you wanna have a view of the city, or simply admire the sunset, head to Mount Phousi. You’ll have to climb approximately 300 stairs before reaching the place. But be careful, Mount Phousi is very popular, there are big groups of tourists all over the place! Therefore I didn’t stay for a long time there. The entrance fee is 20000 kip (2 euros).

Otherwise… There are mostly temples in Luang Prabang. Actually there are 33 temples in Luang Prabang, and it’s not a big city! I saw Wat Mai (it’s 10000 kip -one euro- to get in), Wat Xieng Thong, the city of gold temple (it’s 20000 kip -two euros- to get in), Wat Sene (the oldest one, free of charge!), and other ones… I also went to the Royal palace (it’s forbidden to take pictures inside, they take your camera and keep it in a locker room. It’s 30000 kip -3 euros- to get in). Oh and I also crossed the Nam Kham Bridge. Be brave, the planks creak under your feet, some of them are broken…

Finally, after spending the day visiting various temples, you can relax at the most popular bar of Luang Prabang, Utopia! Very good vibe there! The downside is… They close at 11:30pm, and at such an hour, people don’t wanna go home… Therefore backpackers end up at one of the two only places open in the city after 11:30 pm! Either the bowling, or Daofa club, a big club with local pop music, HUGE toilets (we were all shocked!), and almost only young locals partying!

Luang Prabang, it’s worth the detour for the Kuang Si Falls, otherwise it’s mostly a place to party…