During my visit to Hong Kong, I realized I wasn’t far from Macau. Therefore, it was quite obvious, I had to go visit Macau. I did my little research about Macau, and I told myself I wouldn’t stay for several days there (looking back I think I did the right thing, but staying two or three days there isn’t bad either). So I decided to do a day trip to Macau from Hong Kong, in order to see the city also known as The Vegas of the East. Here’s what I thought about this city! I also gathered a few travel tips if you wanna do a one-day trip to Macau. 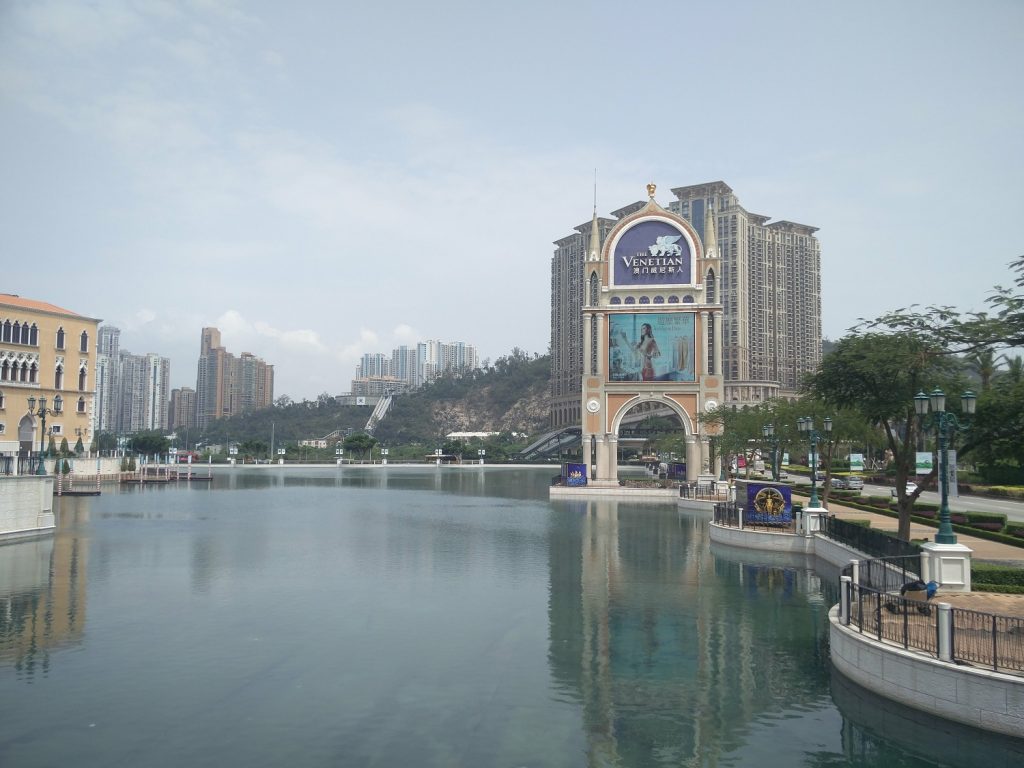 A little bit of history of Macau

Until December 20th, 1999, Macau was a Portuguese colony. Actually it was the last European colony in Asia, and Macau became independent after more than 400 years of Portuguese occupation. In fact, Macau is a special administrative region of China, but it’s no longer under European occupation. Although Macau is now “free”, the Portuguese influence is still very visible in Macau. The signs are in Cantonese but also in Portuguese, the food served there is an interesting mix between Asian and Portuguese (they sell the famous pasteis de nata everywhere, those are egg tarts, it’s a Portuguese specialty), and you’ll notice the Mediterranean architecture all over the place. However, quite surprisingly, the locals don’t really speak Portuguese…

Macau is a World Heritage Site by UNESCO since 2005, and it’s mostly famous for its numerous casinos. In fact, that’s why we call it the Vegas of the East. Actually, Macau is the only part of China where casinos are allowed, that’s why they’re all over the place here, and it explains why so many visitors are Chinese. Out of the 30 millions of annual visitors to Macau, 70% come from mainland China and 20% from Hong Kong or Taiwan. Those who arrive from Hong Kong generally do a day trip to Macau.

As I said, Macau is the only city of China where casinos are allowed. Therefore, the Chinese visitors are literally everywhere! I had planned to go to Macau on a Sunday but several people told me not to go on a weekend because it’s too crowded. So I went there on a Monday… and damn it was still packed! What does it look like on a weekend!? The Chinese love to gamble!

Let’s talk about them, the casinos! There are supposedly 33 casinos in Macau, and almost all of them are replicas of the casinos in Las Vegas. Been to Vegas before? You’ll rediscover the Wynn, the MGM, the Venetian, the Sands, the Babylon, the Galaxy… The Lisboa is the only casino specific to Macau. Since you’re here in Macau, take some time to “visit” a few casinos, and gamble if you want to. Unfortunately and you probably already know, it’s forbidden to take pictures inside the casinos… And it’s a pity… Don’t even try, there are cameras everywhere in the casinos!

Which casino should you see? The Venetian is wonderful!!! Apparently it’s the largest casino in the world and inside, you’ll find replicas of the monuments in Venice (Doge’s Palace, the Rialto and the Bridge of Sighs). There’s even an area of the casino with a lake where it’s possible to ride a gondola, inside the Venetian! I was also shocked by the toilets of the casino! They’re sublime! It makes a change from the toilets of the Pamir Highway…

Don’t miss The City of Dreams. From what I heard, this casino hosts some of the world’s biggest poker tournaments. There are other casinos to see, like the Galaxy and the Lisboa. In all of them, you’ll find the classics : slot machines, poker tables, roulette, black jack… They also play a very popular game but it was impossible to know what they were playing… I wanted to ask but they don’t really speak English here, which surprised me. Yeah most of the tourists come from mainland China but still…

So many casinos in such a small place, is it profitable!? Hell yeah it’s profitable! The revenue of the casinos in Macau are a lot higher than the ones in Las Vegas (45 billion dollars in Macau, 7 billion dollars only in Las Vegas!). I told you, the Chinese love to gamble! Gambling is truly addictive! You’ll notice there are no windows nor clocks in the casinos! You quickly lose track of time!

What to do in Macau?

Apart from the casinos, is there anything to do and see in Macau? Fortunately yes! Make the most of your day in Macau and visit the city! This is when you’ll really realize how present the Portuguese influence is. Go visit the ruins of St. Paul’s. Those are the ruins of the catholic church of St. Paul and St. Paul college, both destroyed by a fire in 1835. Right now, just the facade of the church remains on a small hill, at the top of stairs. The ruins of St. Paul’s is the most iconic place of Macau, there are a LOT of people there, believe me! Go there in the morning if you wanna avoid the crowd. Behind the ruins of St. Paul’s, there’s a museum exhibiting sacred art. It’s free to get in but it’s very small. All this are is full of tourists, and it reminded me a bit of the Sacré Cœur in Paris (the crowd on the stairs, the tourists wandering in the streets in the surroundings…).

Not far from the ruins of St. Paul’s, take some time to admire St. Dominic’s church, which dates back to 1587! Just next to the church, take a walk at Senado Square, one of the most famous places of Macau. I’m telling you guys, you really feel like you’re in Europe there : the roads are made of cobblestones, the buildings are colorful and there’s a beautiful fountain in the middle of the square!

Yes there are many casinos but let’s not forget we’re still in Asia, which means you’ll also find old temples, still here to this day. I suggest you to go visit the A-Ma temple! It’s the oldest temple in Macau, and the oldest original building still present to this day! It dates back to 1488! You’ll find there Cantonese writings on the rocks, incense smell all over the temple and also locals praying at the end of the day, since this temple is still a place of worship. It’s free to get in.

If you stay in Macau in the evening, there’s a show you cannot miss (that’s what people say!), called The House of Dancing Water, not far from the casino The City of Dreams. They have shows daily at 5pm and 8pm. I cannot say more since I didn’t see it, but I just heard good things about it. Get a ticket for the show here! Otherwise, as you’ll be walking around Macau, you’ll probably notice it’s a shopping empire, actually a luxury shopping empire (Dior, Chanel, Prada… They’re all here!). So many loaded Chinese go on a shopping spree in those shops, it’s insane!

Macau is not a big city, so you can do all those things in one day, if you get there early in the morning and leave at the end of the day. Here are a few tips now if you wanna go to Macau.

How to get to Macau from Hong Kong?

The easiest way to go to Macau from Hong Kong is by ferry. You first need to go to Sheung Wan subway station. Once you get there, you’ll notice several companies cover the route. I bought my ticket with Turbojet, and I paid 171 Hong Kong dollars (20 euros). You’ll get an assigned seating in the ferry (just like in a plane), and it’s a one-hour ride. There are departures every 15 minutes.

To get back to Hong Kong from Macau, just take the same ferry the other way around. This time I paid 200 dollars (22.50 euros) There’s one important thing you need to know : when you buy your ticket, you need to pick a departure time. No worries, it’s still possible to take an earlier ferry than the time you booked, but you can’t take a later ferry. Basically, book a late ferry going home, you’ll still be able to take an earlier ferry if needed. To go to Macau and to go back to Hong Kong, I took an earlier ferry than the one I booked.

Check the visa policy here. In most cases, if you come from a Western country (Europe, USA, Canada, Australia…), you don’t need a visa to go to Macau. But you need to know that technically, you’re leaving the country (Hong Kong) when you go to Macau! That means you need to bring your passport with you! To go there and to come back, I had to go through customs and passport control. For your information, going to Macau resets your Hong Kong tourist visa. It’s useful if you wanna stay more than 3 months in Hong Kong…

How to get around in Macau?

The easiest way is to take advantage of the free casino shuttles! Yeah they have buses going everywhere, and it’s free! Moreover they give goodies! When I arrived in Macau, I took the Shuttle City to go to the City of Dreams. Otherwise, in the city center, you can walk. It’s not big, and everything is within a walking distance. If needed, you can take a taxi, but I never took one.

Macau has its own money, the pataca, which is pegged to the Hong Kong dollar. But don’t worry, you can use the Hong Kong dollar in Macau. When you buy something in Macau, they’ll give you pataca change, and not Hong Kong dollars. Be careful, you’ll have to spend your patacas on the spot! Once you leave Macau, it won’t be possible to exchange your money anymore (like the manat in Turkmenistan). So spend them here!

Can I visit Macau in one day?

Yes, if you arrive in the morning and if you leave in the evening, it’s doable. In fact, that’s what most people arriving from Hong Kong do. If you wanna stay several days, I think 3 nights/2 days is perfect. It gives you time to watch the shows in the evening, have dinner in a nice place, but also gamble at the casino in the evening! The best time to visit Macau? From September to November, or from March to May. Oh and please don’t forget, go there on a weekday, not on the weekend!