I already talked about it in my article with all the tips about Uzbekistan, but Central Asia, in general, doesn’t attract many people. With no mass tourism, interactions with the locals are more authentic, and after Tashkent, my last stop in Uzbekistan, I knew I would still be blown away for the next few weeks, visiting this overlooked area in the world. So here I am, in Kazakhstan! I first spent a few days in Shymkent, but I’m not writing about this city. There’s not much there, apart from a big bazaar. By the way, I was the only guest in the whole hostel in Shymkent! After Shymkent, I headed to Almaty, the former capital of Kazakhstan!

Almaty former capital? Yes, until 1997, Almaty was the capital of Kazakhstan. Then the president decided to relocate the capital to Astana, in the north of the country. Astana, a less populated city, smaller, and less touristic. We don’t know the official reason. Some people say he did it to be geographically closer to Russia, others say it’s because Almaty is located on a seismic active zone. Anyway, by visiting Almaty, you can get why it was a capital not that long ago. 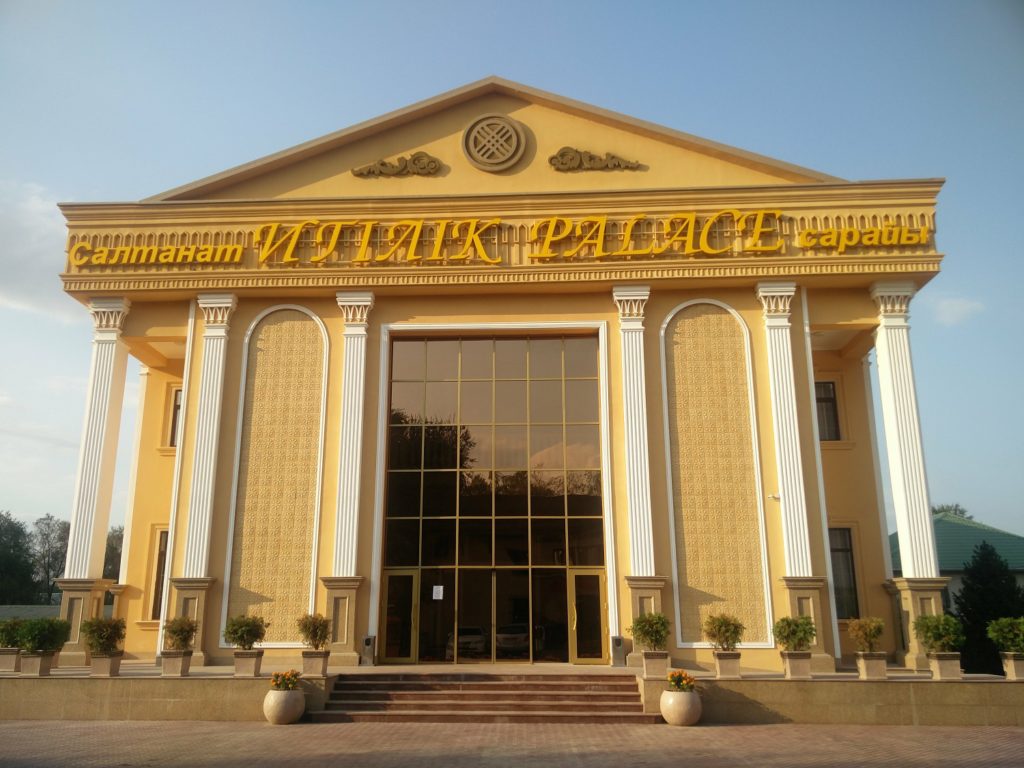 We’re clearly in a big city. Actually I wanna say we’re in a big European city. I heard this before, but Kazakhstan is the most Western country, the most developed, and the least disorientating country of all the “stans”. There are bars everywhere! Also many café’s terraces packed with locals, drinking beers, a café, or a cocktail! Bars and terraces, I haven’t seen those in a looong time! 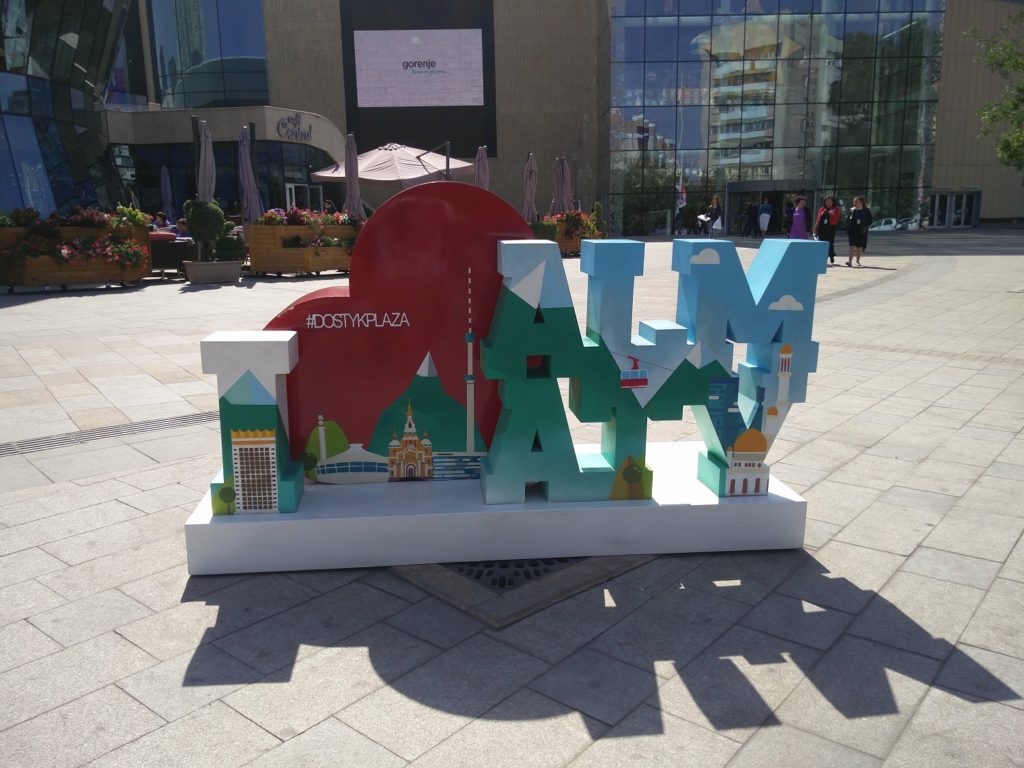 Like in Paris, you can rent a bike for half an hour, one hour or a full day. They’re all over the place! And I see US fast foods again (McDonald’s, Burger King…). Again, I haven’t seen those in quite some time. Damn, I really feel like I’m in Europe! Knowing I was in Uzbekistan just before and also in Turkmenistan, that’s a big change! Oh, and there’s also many internet cafés, with teenagers playing online. I went to two of those internet cafés (to print documents), and I noticed that they have small VIP rooms for their best customers! No no, we’re not in a club, but an internet café…

Admittedly not disorientating, but you have to remember we’re in Central Asia, an area with very few tourists, and even less black people! For those who follow this blog, I’m gonna repeat myself, but I’m a VIP here! Kazakh people, typically Asian or Russian, are very happy to see me. They still honk at me, even buses honk at me, many, many cheerful “Hello!” from people in the street, they ask for pictures with me, girls come to me to talk…

Yes, in Almaty, and from what I heard in Kazakhstan in general, girls strike up a conversation with men, even in the street! With men… I mean, with tourists! Trying to pick up a tourist, and keep him of course! There are more chances to find a “good guy” among tourists, rather than a local. It seems that girls there have a hard time trying to find the right person, therefore they fall back on the few tourists passing by the city. Guys, if you go to Almaty in the near future, I suggest you to test out the Chukotka bar on a weekend, you’ll see by yourself…

After leaving Shymkent, I took a train to go to Almaty, an 11-hours ride. I ended up in a compartment with three local girls, around 25. They didn’t speak English, and my Russian is limited, but they really wanted to communicate. Nice! 🙂 Instead of the usual questions I hear in Paris “What are you doing for a living? Where do you live exactly?“, it was more like “Do you smoke? Do you drink? Do you like to fight? Do you gamble? Are you in debt because of cigarettes/alcohol/gambling?”

After listening to my responses “No, sometimes :), no, no and no“, they were all very surprised “Woooooow! You’re really a good guy!“. Those questions tell a lot about the men they rub shoulders with in their everyday life… Then they explained how hard it is to find a good boyfriend here, men have a mental age of sixteen… The only one who had a boyfriend, 26, told me “We’ve been together for two years now, and he still didn’t propose!“. Another one told me her ex was telling her who she could see (or not!), the hobbies she could have (or not!). We have those guys in France, too! 🙂 Actually everywhere! 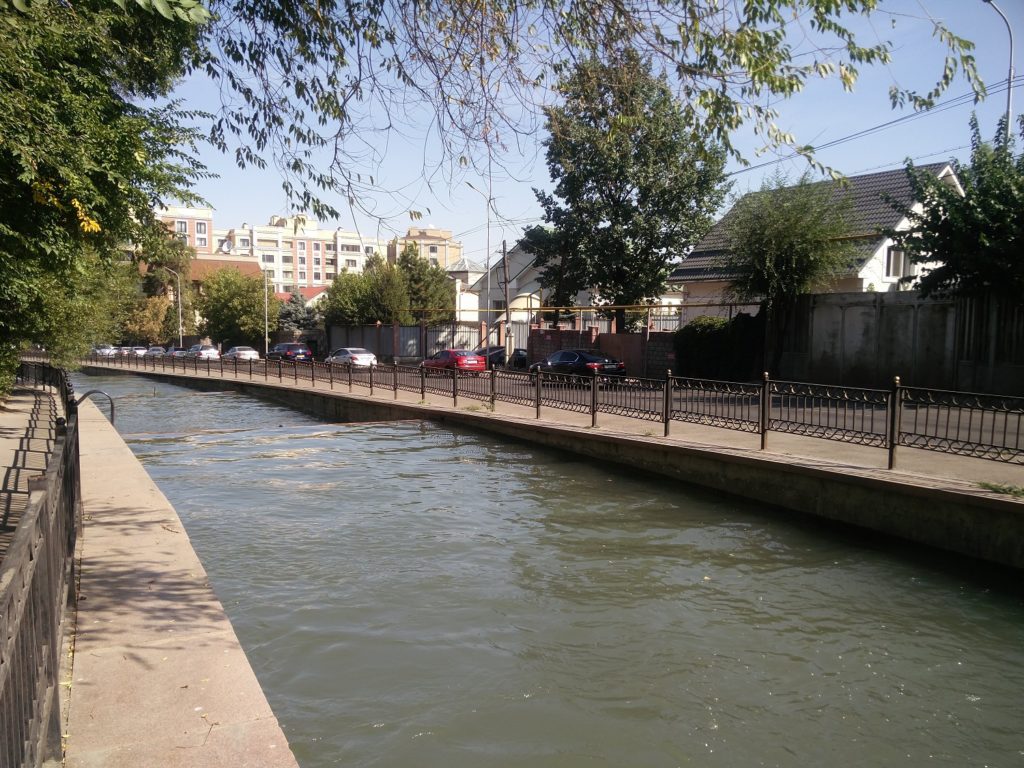 Although Kazakhs are very kind and welcoming, some local guys told me to be careful. They asked me if I didn’t have any fight, if I didn’t have any problems… No problems, even though a drunk Kazakh annoyed me one afternoon “Nigga! Nigga!“. He could barely stand up… Yep, in ex-USSR, they like to drink, and several times when I was talking with local guys, even daytime in the afternoon, some of them smelled hard liquor! Still, no safety problems, I even walked around Almaty by myself during the night, and nothing wrong happened! Just in case, if you go to Kazakhstan, don’t forget to get a travel insurance, you never know…

Not only this country is safe, but it’s also very cheap! You can have a good meal for the equivalent of two euros, a pack of cigarettes costs one euro (but I don’t smoke…), the bus ticket in Almaty is 150 tenge (0.40€), alcohol is not expensive… Now I get why you can all find them at the bar or sitting at a café’s terrace. Something I found funny : a lot of girls drink their pint with a straw! And a lot of them asked me “But why did you come here, in Kazakhstan???”

Even though Almaty is a city where the cost of living is low, you’ll see many homeless people compared to Uzbekistan. Trying to spot the tourists, waiting outside restaurants or supermarkets, asking drivers at a red light and zigzaging between cars (in Kazakhstan the steering wheel of some cars are on the right-hand side, and sometimes on the left-hand side, just like Georgia!). Oh and I bumped into three black guys!!! One from Nigeria, eating at a restaurant with his family. The two other ones were together : one from Cameroon, the other one from Ghana. “Hellooo brother!” or “Wassup?” is how they greeted me. Three other superstars in the country! 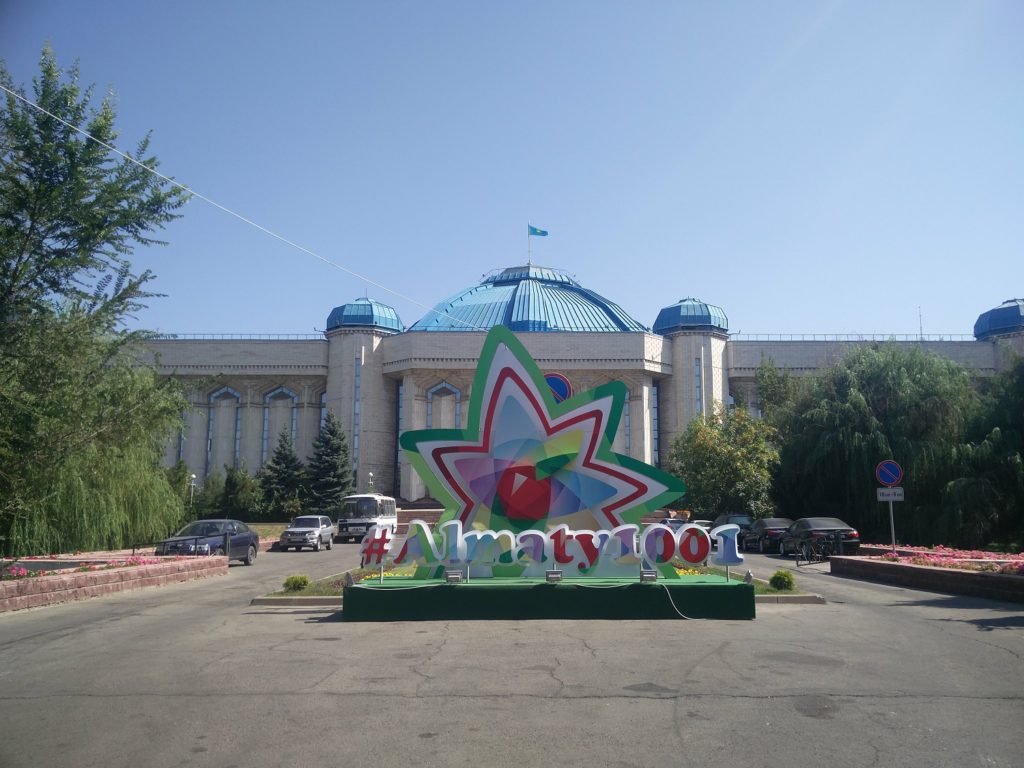 What can we visit in Almaty? The Zenkov cathedral, located in the Paniflov Park. I’m definitely not lucky. A lot of tourist sites under construction during my stay in Central Asia, and this cathedral is not an exception. What’s so special about this cathedral? It’s completely made of wood, and they didn’t use a single nail to build it! A cathedral in Kazakhstan? Yep, 70% of the population is Muslim, and 30% is Orthdox. Avoid wearing shorts or tank tops if you wanna get inside.

The green bazaar. You’ll find almost anything you need in this bazaar : fruits, salads, cheese, meat… A little bit further toys, clothes, books, kitchen ustensils… I tried to, but I didn’t manage to take a decent picture there. Either people kept staring at me, or they asked for pictures, all the time!

You can admire the sunset in the heights of Almaty, in a place called Koktobe. You’ll have to take a funicular to get there, close to the Palace of the Republic. A two-way ticket is 2000 tenge (5 euros). You’ll have a nice view up there, and in Koktobe, you’ll also find bars, restaurants, and a small amusement park.

I didn’t stay for a long time in Kazakhstan, but it was an interesting experience… Obviously I didn’t see all of it but I recommend going there!