For a short time, I hesitated. Should I visit Manila? Indeed, ALL the travelers I met agreed : visiting Manila is useless, there’s nothing to do there, etc… Even the travelers coming from Europe to visit the Philippines, usually take a flight to Manila, and right after another one from Manila to Palawan or Cebu for instance, without actually staying in the Filipino capital. Oh and I also heard many people saying Manila is a dangerous city. However, I already said it several times in the past, I’m curious by nature. That means even though I took into account people’s recommandations, I decided to visit the capital of the Philippines. So… what is it like to visit Manila?

Manila is a capital, so the city is full of people all over the place, there’s a lot of traffic and noise, and you can feel the air pollution. There are street vendors everywhere and in some areas, you’ll see many stray cats. Because of all the cars and the scooters, like Tehran, you have to impose yourself to cross the street, otherwise you’ll never cross it! Oh and the 7-Eleven. I saw a lot of them in Southeast Asia in general but they’re even more present in Manila! Just walk in the street and you’ll see by yourself! Every five minutes, you’ll see another one!

There are a few things not that nice you’re going to see if you visit Manila. First off, the poverty. A lot of children wander in the street, and a few kids, barely 3-years old, came up to me asking for money. There are also a lot of homeless people… One day, I was at the mall and there was a power cut! In the mall! No lights at all, no more music in the background, we were hundreds of people in the dark! Never happened to me before. I think it lasted 10 minutes maximum.

In Malate, one of Manila’s discrict, there are many bars, clubs, karaoke bars… and whorehouses! At night, several times some locals came up to me with a magazine in their hands “Wanna fuck tonight?” Their magazines were full of pictures of Filipinas almost naked, with a price tag next to each one of them… Prostitution is a real plague in Manila, and some kids are also victim of sex tourism. I saw more than once old Westerners accompanied by young Filipinas, barely 20-years old…

Manila is not very clean

There’s nother thing I didn’t really like about Manila. The city is dirty. Filthy. Gross. There’s garbage all over the place in Manila. I know it’s not always for poor or developing countries, but this time it was worse than all the other capitals in Southeast Asia I visited before.

What’s one of the consequences of all this? There are cockroaches everywhere! They’re not just hidden discreetly behind a piece of furniture or in a crack in a wall. No no, there’s peacefully having a walk in the street, you can spot them walking on walls outside. Sometimes you’ll see them already dead, squashed on the sidewalk. In Paris we have the pigeons, in Ho Chi Minh City they have the rats, in Manila the cockroaches take over the place! I went out of a 7-Eleven, and I almost walked on a cockroach, already squashed. I went to the laundromat to pick up my laundry, and I could see in the backroom cockroaches enjoying their all-you-can-eat buffet (breadcrumbs). I went in a grocery which just opened a few minutes before and it was mayhem as soon as I opened the door! Tens of cockroaches fleeing in all directions except one… already squashed and dead! Keep in mind I’m not talking about Western cockroaches but the tropical ones, some of them are as big as your hand… 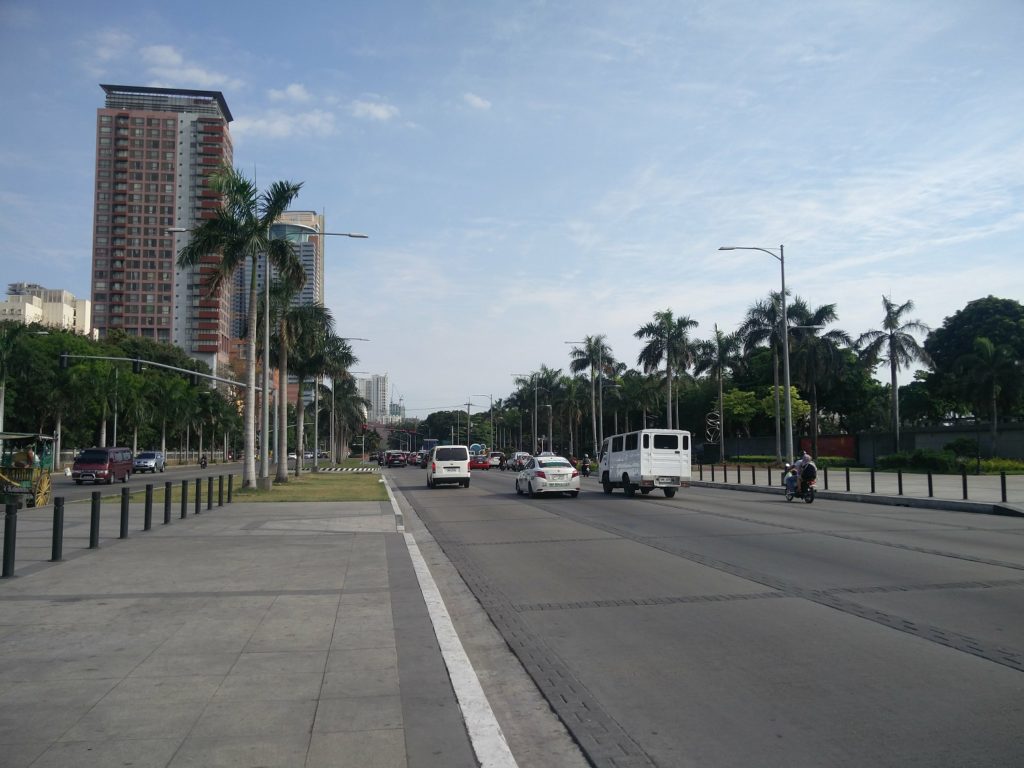 Fortunately, there are not just bad things in Manila. The locals I talked to were really nice and friendly. Some of them greeted me in the street, and we started having pleasant conversations. A few teenagers wanted to get a picture with me, always with respect and in a friendly way.

As I was talking with the locals, I realized their language is a mix between English, Spanish and Filipino. By the way they use a lot of Spanish words : zapatos (shoes), veintiseis (twenty-six)… Their currency is the peso and their last names sound Spanish : Garcia, Fernandez, Rodriguez, Sanchez, Gonzalez, Cruz… Indeed, the country was a Spanish colony from 1521 to 1898. Then the country was occupied by the United States until 1942, then by Japan! The Philippines finally became independent in 1945. Anyway, you can really feel the Spanish influence, even though English is one of the two official languages of the country with Filipino. The only real American influence you can see, is basketball, very popular in the Philippines. There are basketball fields everywhere!

As I said earlier, most travelers just pass by Manila, they prefer to go elsewhere in the country. It probably explains why I almost didn’t bump into a single tourist in the city (apart from the Intramuros area, and of course and in the surroundings). Moreover, Manila is known for being dangerous. Is it the case? I didn’t think it was dangerous, but with my experience as a solo traveler, I learned to show some common sense, even without realizing it. I don’t drink heavily, I don’t hang out in sensitive areas alone at night, I always watch my surroundings, I keep an eye on my belongings, etc… Just take those precautions, you’ll be fine and you’ll avoid tricky situations.

What to do in Manila?

All the travelers kept saying there’s nothing to do in Manila. I don’t agree. First thing first, you can go visit Intramuros, the old city center of Manila and the oldest district of the city. Intramuros was built in the 16th century, when the country was a Spanish colony. Intramuros was partially destroyed during World War II, but was restored during the 1950s. Intramuros is completely surrounded by a defensive wall to protect the city from foreign invasions.

As I said, Intramuros is the only area where I saw tourists in Manila, and as I was walking in the streets, I could clearly feel the Western influence. By the way, Intramuros is the only quiet area of Manila. There’s the university of Manila in Intramuros, so you’ll see many students in the surroundings. In Intramuros, you can admire San Agustin Church and its beautiful ceiling (there’s a museum in the church, it’s 200 pesos -2.30€- to get in, but it’s free to get in San Agustin Church). You can also admire Manila cathedral (a couple was getting married when I went there), and don’t miss fort Santiago and its beautiful gardens. It’s 75 pesos (1.25€) to get in the fort.

Not far from Intramuros, you can relax at Rizal Park. It’s a huge park! You’ll see many families, young moms, strollers, locals having a picnic, kids flying a kite, teenagers playing basketball… The atmosphere is relaxed and inside the park, there’s also a Chinese garden and a Japanese one.

I also spent some time in Paco Park and cemetery. It’s another park were teens go relax after a day at school. This park also serves as a cemetery. Jose Rizal rests in this park. He’s a national hero who fought for the independence of the country, when the Philippines was a Spanish colony. He was executed in 1896. This park isn’t big, but you should go. In Manila, there’s also Arroceros Park, not unmissable but have a look if you have some time.

You can also have a walk on Manila Bay, also called Manila Baywalk. Quite enjoyable daytime but be careful, it can be dodgy at night. Otherwise you can spend some time at Manila Ocean Park, an aquatic theme park (I didn’t go), and you can visit the National Museum (didn’t go either).

Honestly, I can understand why all those people say you shouldn’t stay in Manila. The city isn’t clean, it’s polluted, and the prostitution is very present. But there are a few spots to see. Two days are enough, but you can stay three days. If you decide to go on vacation in the Philippines, I gotta admit Manila is not an indispensable stopoff.