Pokhara is the city where everybody goes in Nepal, because this is where treks start in Nepal. I was hesitating over writing an article about Pokhara, since I didn’t trek for various reasons… But I had the opportunity to visit the city where everything starts, Pokhara, and I met a lot of travelers who were about to start a trek, or coming back after spending two weeks trekking the Annapurna (actually I mostly met people coming back from their trek). Wanna go trekking? Here’s a list of the best treks in Nepal. 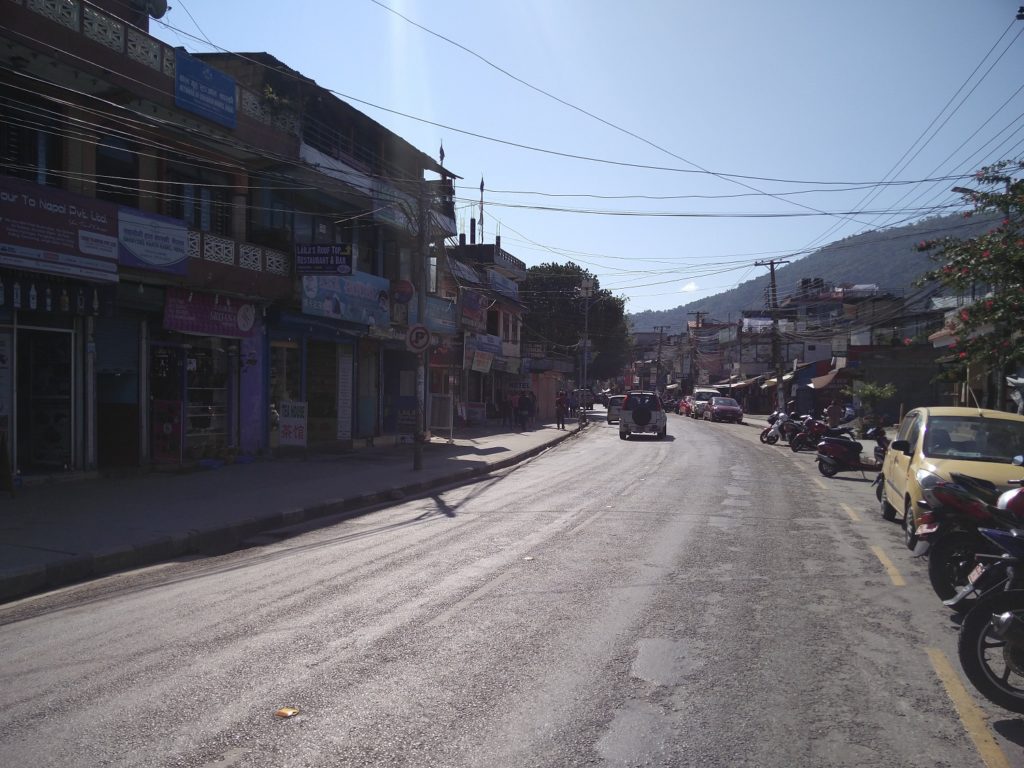 Since Pokhara is the city where people go before trekking, you’ll see everywhere in the city shops selling all the equipment you need for trekking. There were already many trekking shops in Kathmandu, but there’s even more in Pokhara! I checked two or three shops and honestly it’s very cheap, and the quality is not that bad.

Of course, like Kathmandu, there are counterfeit clothes, but a bit less. Those who need to get equiment, I suggest you to buy in Pokhara, rather than Kathmandu. You can also rent your equipement if you don’t want to keep it after the trek. Two brands dominate the trekking market in the country : North Face and Sherpa. I think you know North Face. That’s the locals favorite brand, they all wear North Face jackets (mostly counterfeit ones!). Sherpa is a Nepalese brand also selling all the trekking equipment you need, and this brand is very present in the city.

Otherwise Pokhara is a quiet place. Just like in the movies, there’s a paperboy, a guy delivering the newspaper from his bicycle. He throws the newspaper on various courtyards from his bicycle without stopping, or he just hands them to the locals, still riding the bicycle. By the way, Nepalese people are friendly. It’s cultural I guess but to me, their biggest flaw is how they keep spitting on the floor. Everybody : men, women, children. And it’s not a discreet spit. No no, they clear their throats doing this unbearable noise to hear, before spitting enormous gob of spit on the floor.

Actually, Pokhara lives mostly at the pace of all the tourists coming and leaving the city. Everyday, several buses full of tourists arrive in the city. You’ll notice something, the locals and the tourists are in separated buses, and on the tourist buses, you can see “TOURISTS” written in big letters on the windshield. 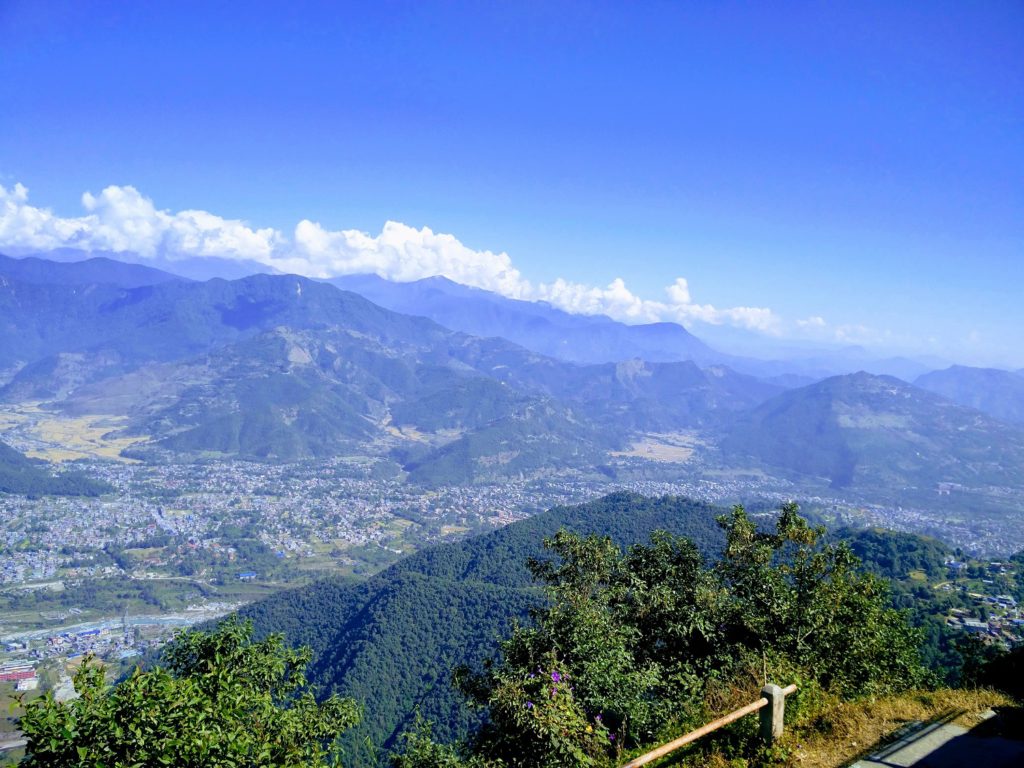 With my backpacker mentality, when I was booking bus tickets, I always asked to get in a local bus, not the tourist ones (it’s cheaper, and more authentic!). But it wasn’t possible, all the ticket sellers told me “No sorry, you have to use the tourist buses“. I found out later why it wasn’t possible to get in a local bus. Sometimes, there are protests in the country (especially during elections). When it occurs, people decide to rebel, and in order to be heard, they damage everything on their way : shops, buildings, cars… and also buses! 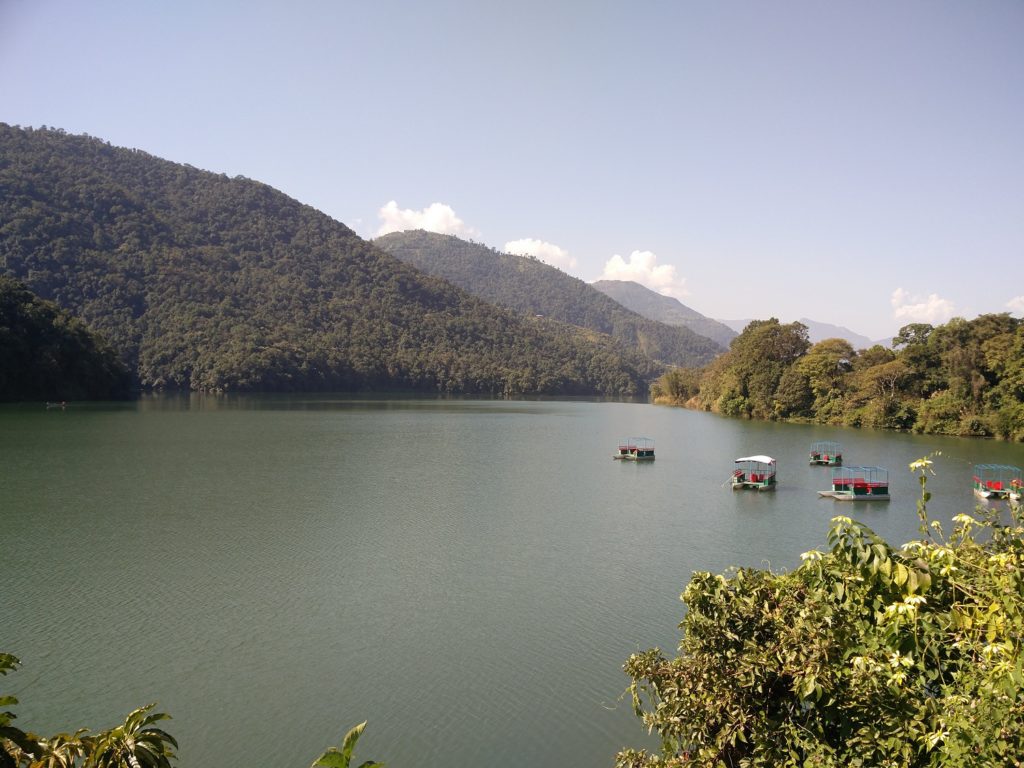 Despite themselves, in the past, some tourists in buses ended up being stuck in the middle of big gatherings with smoke bombs, etc… To remedy the problem, the governement created tourist buses. Therefore “TOURISTS” is written in big letters on the windshield, there are only tourists in thoses buses, and if a protest happens, those buses stay untouched by the locals. Those buses are more expensive, faster, and above all safer!

If you want to stay in shape before of after your trek, it’s possible in Pokhara! You can hike up to see Shanti Stupa, in the heights of the city. It’s a buddhist monument located on Ananda Hill, at an altitude of 1100 meters. From my hostel in the city all the way to Shanti Stupa, I had to walk for two hours and a half, including at least one hour just hiking up. Once you’re on top of Ananda Hill, next to Shanti Stupa, you can admire Pokhara, the Annapurna and the Fewa lake. By the way, if you’re into hiking, or if you know someone into hiking, here are the best gift for hikers!

There’s also Sarangkot, a village at an altitude of 1593 meters exactly. The main reason to go there is the nice view once you’re up on top : Pokhara, the Annapurna… From my hostel, once again it took me two hours and a half to go all the way up (this time I wasn’t alone, which means I could have been faster). To get in the village, you’ll have to pay 50 rupees (0.40€) for the tourists, 20 (0.15€) for the locals.

And also Davis Falls, a little waterfall in the city. The entrance fee is 30 rupees (0.25€), and many teenagers are there, in the small garden surrounding the waterfall. Just in front of Davis Falls, Gupteswar Gupha. It’s a cave where there’s not much to see… I don’t know why many locals and tourists go there, but those caves are pretty humid. It’s 100 rupees (0.85€) to get in.

I guess you got it, Pokhara is a place where you don’t spend much time. Travelers usually stay there for one night before starting a trek, and two or three nights to rest after a trek. You’ll have to go there if you wanna trek the Annapurna.