Halong Bay cruise under the rain

My visit to Halong Bay was a flop. A big flop! Yeah, we’ve all heard about Halong Bay dozens of time, we’ve all seen wonderful pictures on the internet, and anyway, how could I go to Vietnam, and not visit Halong Bay? After spending a few days in Hanoi, I told myself I had to see with my own eyes one of the most famous bays in the world. And to visit, there are not many solutions, you have to go on a cruise, a Halong Bay cruise! 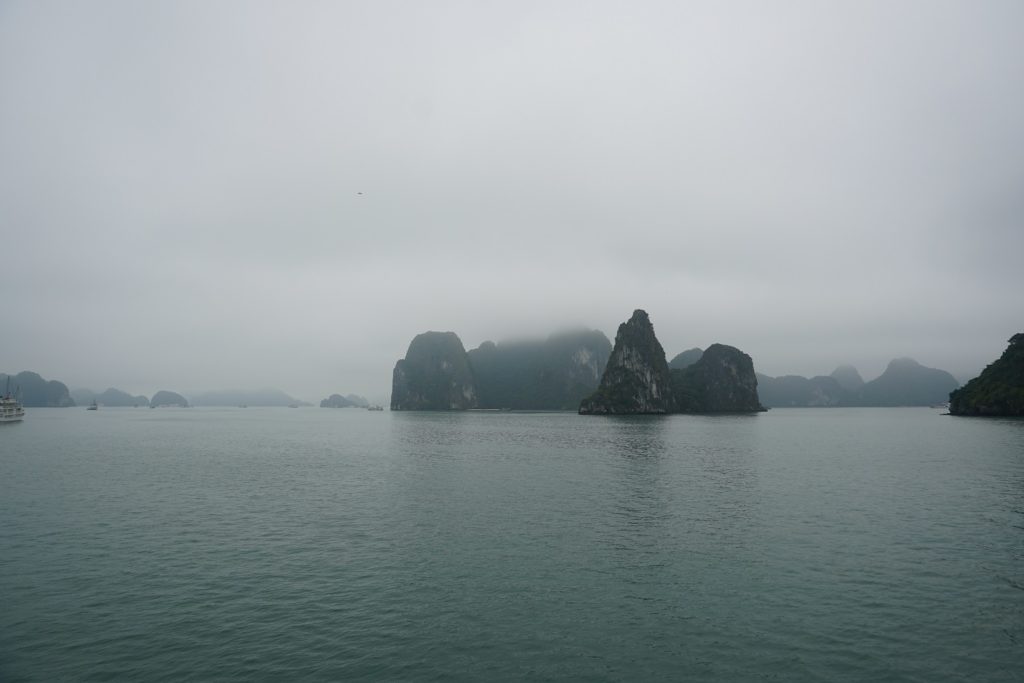 The Halong Bay cruise went well, the staff was nice and the food delicious. The weather was the main reason this cruise was a flop. It kept raining during the two days of the cruise and because of the mist, we couldn’t see much of the landscapes. More on that later, but it was useless to postpone the cruise to a future date. All right, I’ll have to make the most of the Halong Bay cruise, under the rain! 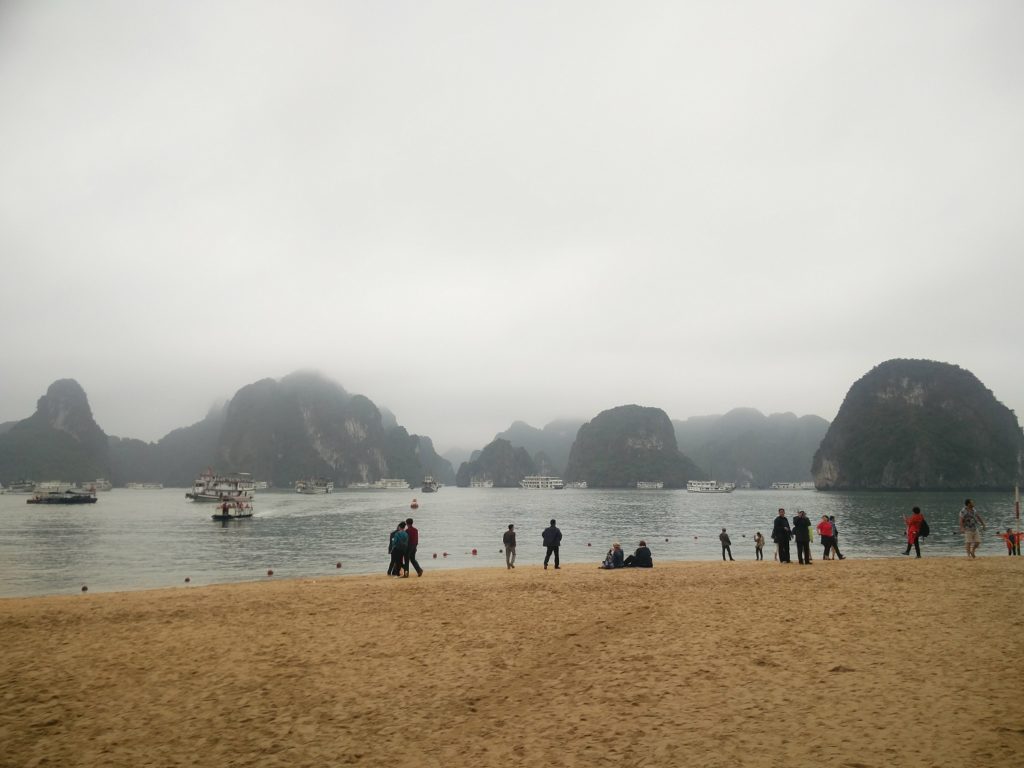 A quick paragraph about the history of the Halong Bay. Halong means “descending dragon”, because supposedly dragons protected the local community from numerous invaders in the past. The dragon, but also the phoenix, the turtle and the unicorn are four sacred animals of Buddhism. Anyway, Halong Bay was the setting for several naval battles in the past. One of the most famous dates back to 1288 when the Vietnamese army managed to sink the Mongol ships. Vietnamese and Chinese armies also fought quite often here in Halong Bay, and numerous pirates were living in the area during the 18th century. Decades later, during the Vietnam war, Halong Bay was heavily mined by the Americans, and some of them are still there today! Since then, Halong Bay became a very popular tourist spot, thanks to its karstic rocks emerging from the sea, bringing out the beauty of the bay. 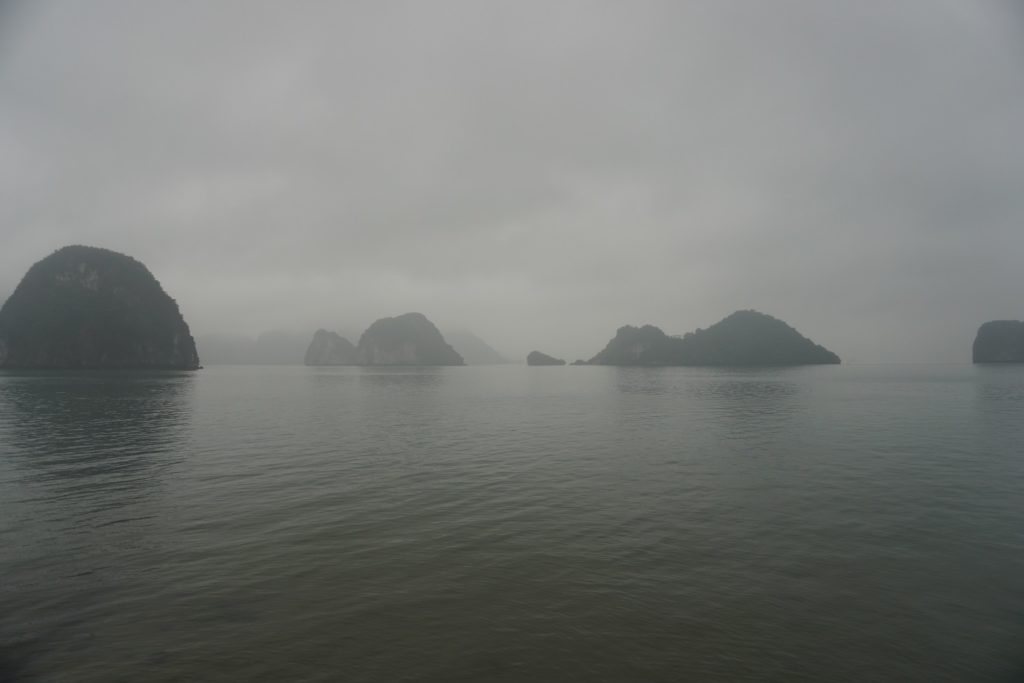 Therefore, it’s possible to visit Halong Bay now, and the best way to do it, it’s on a boat. In Hanoi, there are many travel agencies, hotels, hostels… proposing going on a cruise in Halong Bay, to sail between the 1969 islands forming the bay! I give all the info at the end of the article but you have plenty of options regarding the cruises, the type of boat, how long is the cruise… I chose the most classic cruise, that is to say 2 days/1 night on a boat. 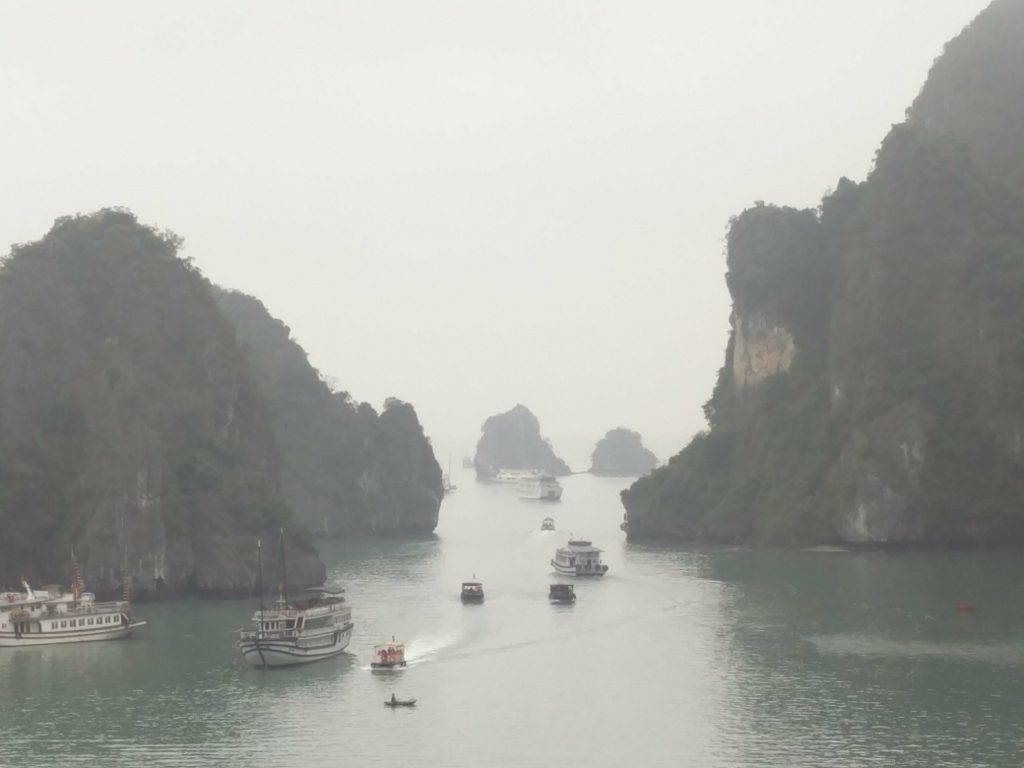 The pick-up time was at 8am in front of my hostel. A van picked up all the tourists from Hanoi who decided, just like me, to go on a Halong Bay cruise. During our 3 hours and a half ride, the guide told us the program for the next two days. And since he was talking to us, he wanted to get to know us a bit more, asking where we were coming from and if we had special requests regarding food : vegetarian, allergic to seafood, to eggs, to bananas… 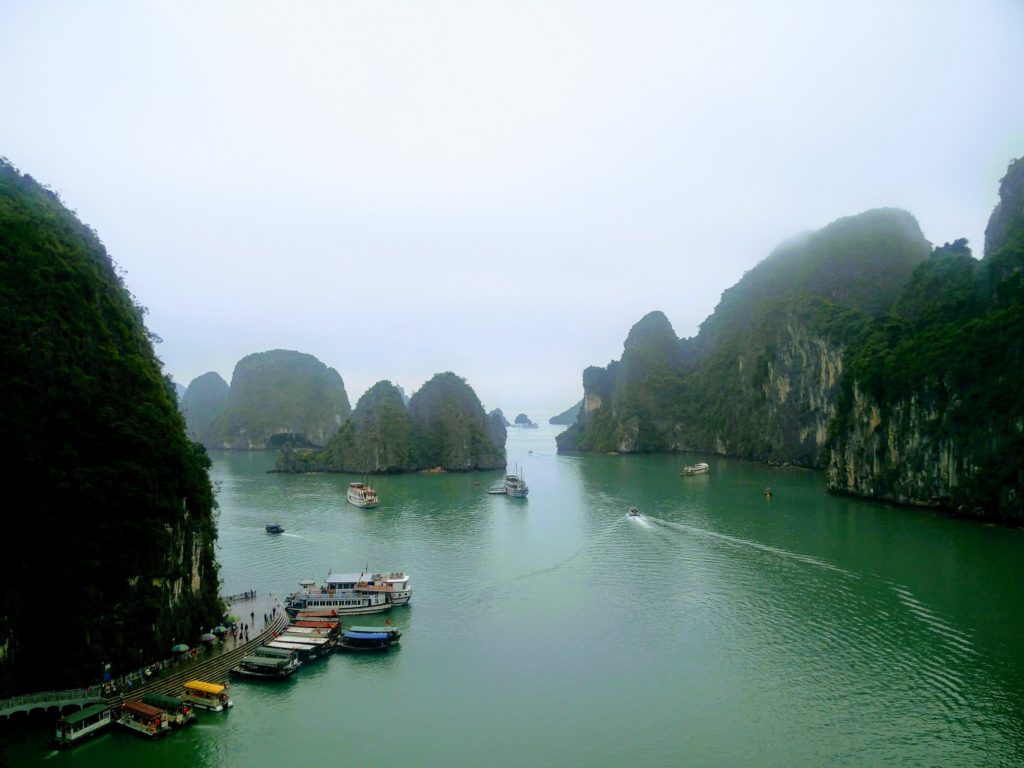 We made it to Halong around noon and this is when I realized it didn’t look good… There was some bad weather and from what we understood, the rain wasn’t going to stop anytime soon 🙁 We were at least one hundred people waiting for our boats, and after a few minutes, our guide asked us to follow him. We hopped on a small boat, which sailed to a much bigger boat, the one for our cruise! They assigned rooms to all of us, and while I was at it, I had a quick look around the boat. On the first floor, you could find all the rooms, on the second floor there was the dining room, and on the top deck, the deckchairs (they were not that useful because of the weather…). 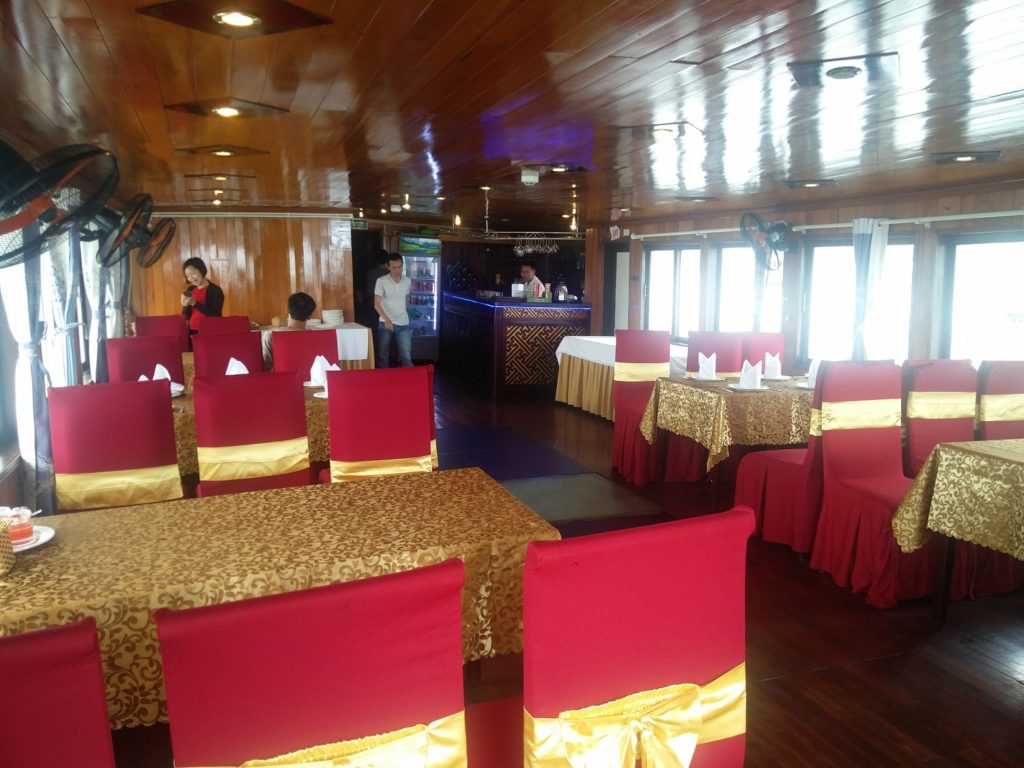 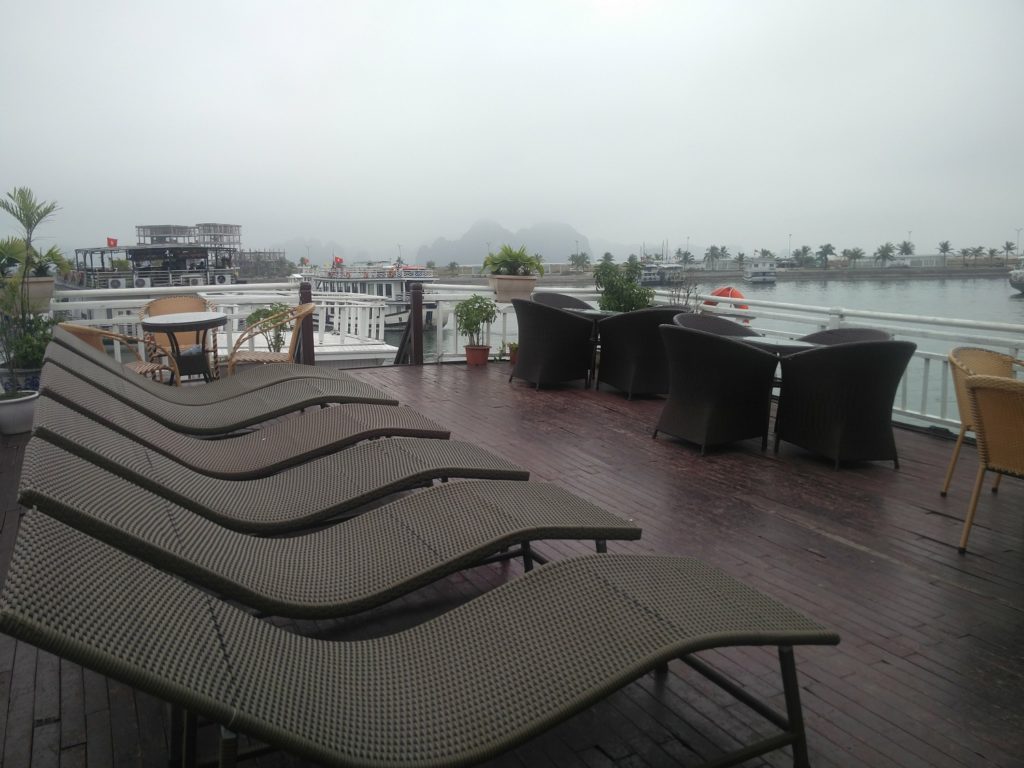 We had lunch, while sailing on Halong and after eating, that’s the moment when you’re supposed to admire the wonderful landscapes from the boat. It was a fail because of the rain… Something suprised me. We were so many tourists in Halong, ready to get on board on our boats. But once we were sailing, we didn’t see any boats! It had nothing to do with the weather since I saw the other boats leaving Halong, too! 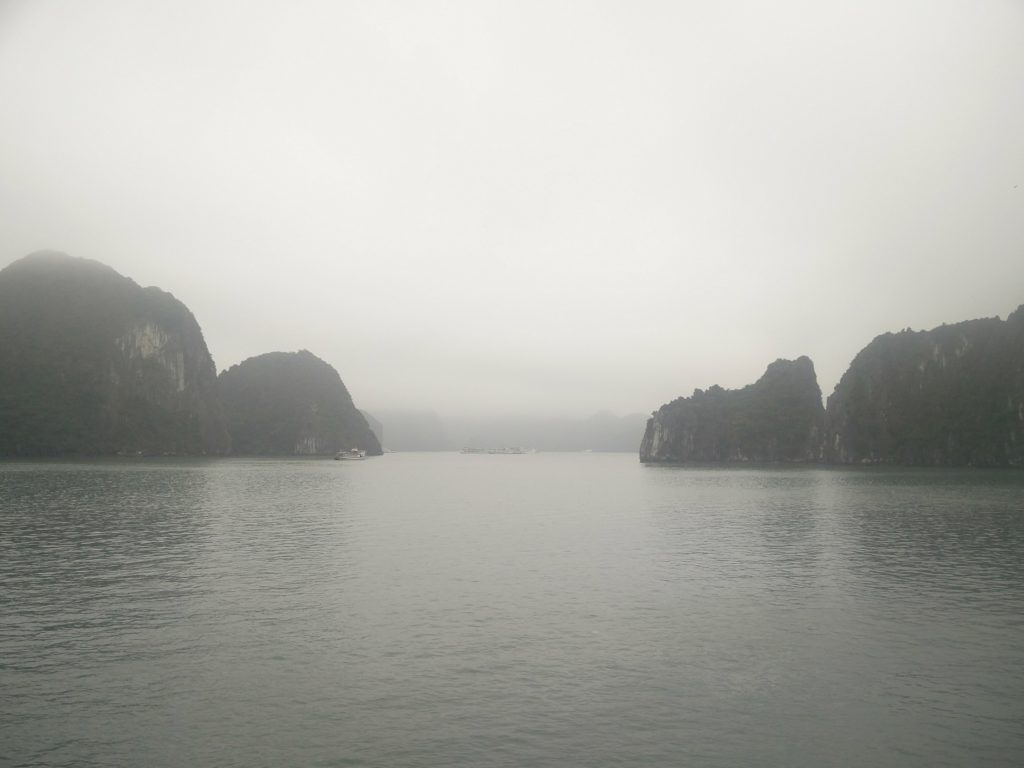 We made our first stop a bit later in the afternoon, to visit Hang Sung Not, also called the surprising cave. It’s a huge cave, 10000 meters square, with three floors. It was discovered by the French in 1901. The cave is filled with unusual rock formations. One of the rocks looks like a Buddha, another one looks like a turtle, and there’s even one looking like a dick having an erection (it’s a fertility symbol to locals!). This cave is well maintained, and it’s the most visited in the area (we were numerous!). But I thought the visit was a bit boring… 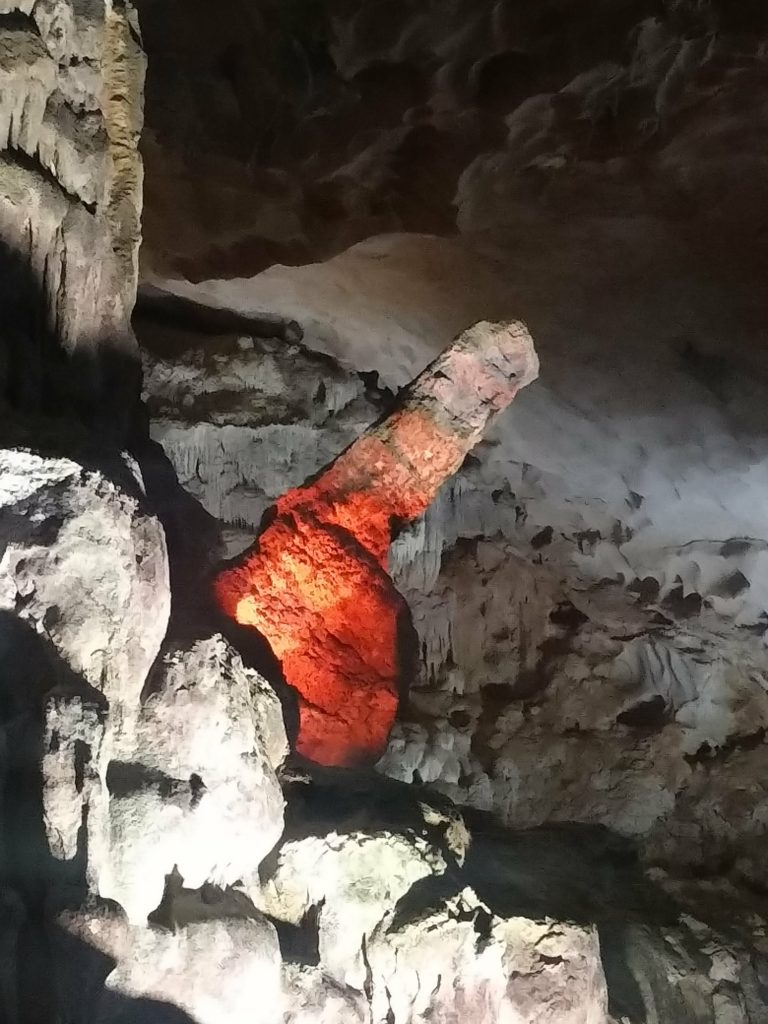 After visiting Hang Sung Sot, we went to Titop Island, and it was even worse there. People all over the place! The locals told us that at the top of the island, there’s a viewpoint. From there, you have a wonderful view of Halong Bay. Let’s go up there then! I have to say the view is probably stunning when the weather is nice, but it was raining… And people kept elbowing one another to take pictures, in spite of the fog. Otherwise, on Titop Island, it was possible to play soccer, to take pictures, to relax…

We went back to our boats after that and again, it was supposed to be the moment when you admire a breathtaking sunset. Again, it was a fail… So we had some spare time, and I still managed to have a good time, with the other tourists who were on the boat (we were 12). Dinner time arrived quite fast (a good buffet), we had a few beers, and we ended the day doing karaoke. 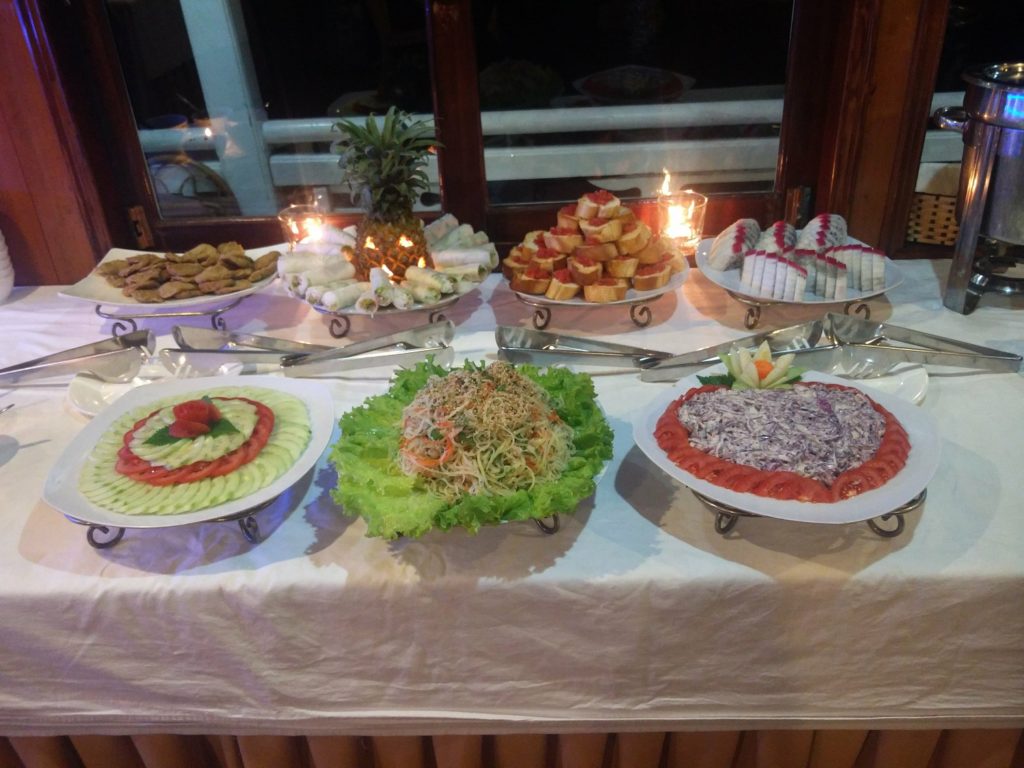 The second day was worse, regarding the weather. We were supposed to go kayaking but it was impossible because of the rain. So we visited a workshop where they explained us how the locals go fishing for oysters, the perfect way to open them, they also showed us the jewelry they’re making with (needless to say, there was a shop where you could buy those jewelries)… We went back to our boats, and travelers from two other boats joined us. It was time for a cooking class! They taught us how to make spring rolls. We were way too numerous for the few plates and spring rolls on the table, so I didn’t attend the class… We then had lunch (the appetizers were the spring rolls cooked one hour before!), before heading back to Hanoi…

I found out later that my Halong Bay cruise was the last one before quite some time. The Vietnamese governement didn’t allow the 2-days and 3-days cruises for several days because of the weather, it was too dangerous. As you understood, I was disappointed, not by the beauty of the bay but because of the weather. One day, I might go back there in better conditions…