Chiang Rai (not to be confused with Chiang Mai!) is a city located in the north of Thailand. Travelers going to the north of Thailand usually visit Chiang Mai, Pai, and then Chiang Rai. Chiang Rai is the most northern city, and it’s also the biggest city of the golden triangle. What is that, the golden triangle? It’s a region where Thailand, Myanmar, and Laos meet. This area was the world’s major producer and exporter of opium, but also of heroin. Some people say we call this area the golden triangle because they were using gold for all the transactions. Other people say gold was just a nickname, a way to call opium.

Nowadays, this whole opium trade doesn’t exist anymore. I mean… it still exists, but it’s very low key. It’s still relatively easy to get opium in Luang Prabang, Laos (I was offered opium by a local, and I was with travelers who actully tried opium right under my eyes…). But now, Afghanistan is the world’s first producer of opium. And opium leaves the country via the Pamir Highway in Tajikistan, before circulating elsewhere in the world (that’s what I was explaining on my article about the Pamir Highway, a mere river separates Tajikistan from Afghanistan, sometimes without any control).

Anyway, let’s forget about opium, and let’s try to be focused on Chiang Rai. It’s a small and quiet city, and like many places in Asia, a lot of people walk with an anti-pollution mask. Oh and there are maaany ladyboys here, it’s incredible! I wasn’t expecting to see all those “guys” here, in the north of the country! We usually expect to see them more in the party cities like Phuket, Pattaya… But I have to admit I was a bit surprised. It’s not just the ladyboys, but also all the questionable massage parlors… Thai girls constantly call me out when I’m passing by a massage parlor “Chocolate maaan! I wanna eat youuu! And you can eat meeeeee!”

I’m definitely not saying that I’m supporting this, but there was another thing that is not very surprising in Thailand. All those young Thai girls flirting with old Westerners, 60+ years old… There’s a main street with a lot of bars and I saw several “couples” there. I tried not to see them but they are literally everywhere. So I decided to walk staring at the floor… to find out Chiang Rai is infested with rats! Nighttime, they take over the streets of Chiang Rai!

I decided not to be too focused on the rats and the shady couples. I’d rather do what I love to do : eaaaating! There’s a night market (like most cities in Thailand), and it’s possible to eat well for a cheap price, with Thai music in the background. Pad thai, soup, fish… You can have whatever you like, and you won’t pay more than 60 baht (1.50€), most likely 40 baht (one euro). Even better, if you’re in the city on Saturday, go to the Saturday night market! It’s huge!!! Not only you’ll find good Thai souvenirs to buy, but again it’s possible to eat for almost nothing. I had a dish and a soup and I only paid 30 baht (0.75€!). The icing on the cake? There’s an area in the market where you’ll hear very loud Thai music, and you’ll see all the locals dancing! I mean… Most people dancing are people over 40 but still… It’s funny to see them dancing like crazy on the dancefloor (read : the street!).

The main attraction of Chiang Rai is the white temple, also called Wat Rong Khun. It’s actually located 11 kilometers (7 miles) south of the city, and it attracts many people. The best thing to do is to go early in the morning. I went there at 10:30am and it was already too late… The white temple has a very different style from the “classic” temples visited in the area. The white color symbolizes the purity of Buddhism, and you have to cross a bridge surrounded with outreaching hands to get in the temple. 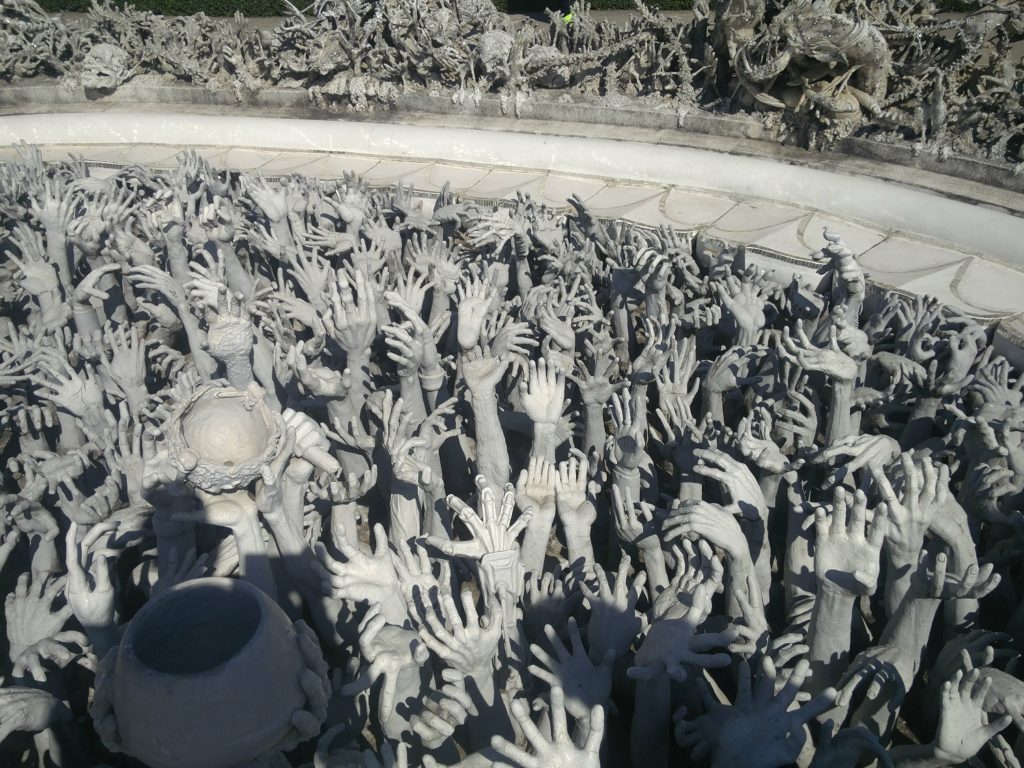 As usual, you have to take off your shoes before entering the temple, which is quite small. It’s forbidden to take pictures inside the temple. Next to the temple, there’s a museum exhibiting Thai contemporary art. Again, you cannot take pictures inside the museum. The museum is free, but you have to pay 50 baht (1.25€) to get in the white temple. There’s a discreet entrance on the side, where it’s possible to get in for free. 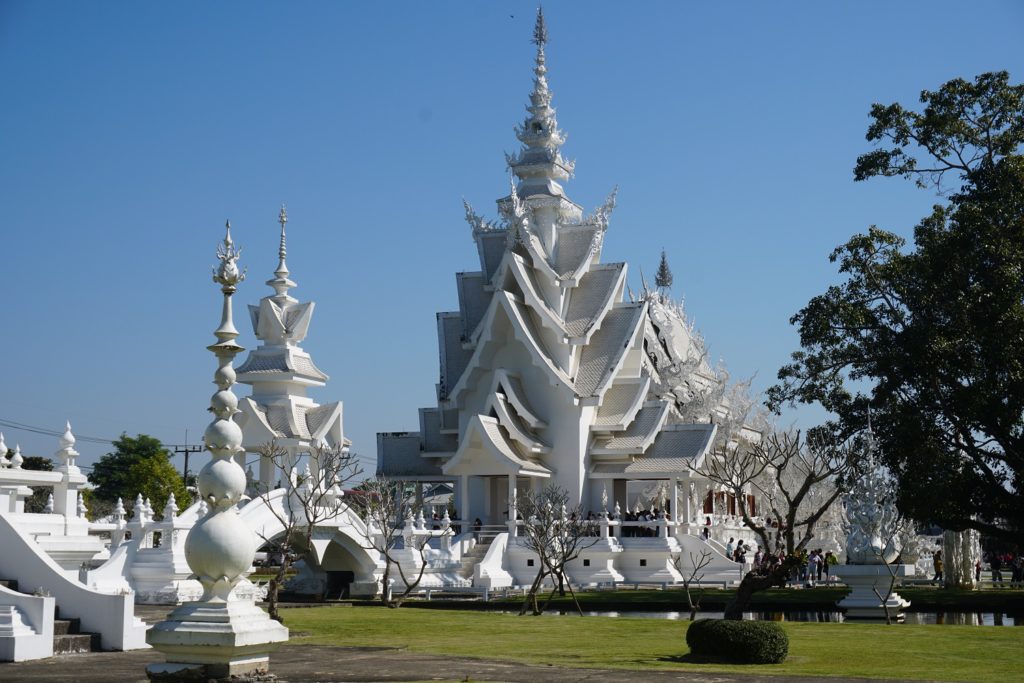 Another “original” temple you have to see in Chiang Rai, is the blue temple, also called Wat Song Ruea Ten. Yes, this temple is blue. It changes! The inside of the temple is completely blue, except the Buddha, which is white. This temple is actually very new. It was completed in 2016. This means it’s not very famous yet, moreover the blue temple is a bit further in the north (it didn’t prevent me from going there by foot…).

I visited other temples in Chiang Rai, but I won’t list all of them. I almost overdosed on temples visiting them, and I’m pretty sure it’s not impossible to overdose on them just by reading the description of tens of temples. I saw Wat Ming Muang, beautiful, not big, but unfortunately under construction when I was there. Wat Phra That Doi was less crowded because it was further. Wat Phra Kaew, located in the middle of a garden, is very popular, especially among locals. This temple houses a statue of Buddha made of jade. Otherwise, I didn’t go to the black house, nor the Singha park.

I wouldn’t say Chiang Rai is a must see in Thailand, but you can go there if you’re in the area. I clearly didn’t like Chiang Rai as much as Pai, but the city is quiet. The only thing that really annoyed me was the sex tourism, very present in the city…