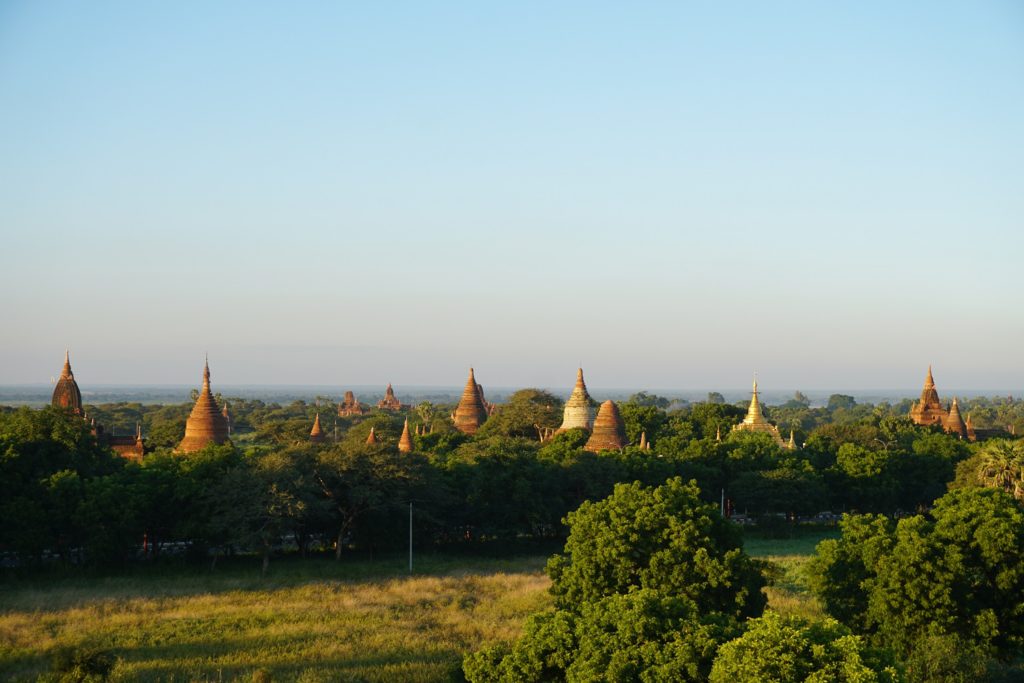 Here I am in Bagan, an unmissable village for anyone going to Myanmar. Bagan is a small village living off tourism today, thanks to the 2220 temples spread all over Bagan and the area. When we think about Bagan, the first thing that comes to mind is an image with hot air balloons in the sky, but also temples and the sun in the background. Those images built Bagan’s reputation, and constantly attract more and more tourists (including me!).

Just to make sure you understand, Bagan lives in rhythm with the sunrise and the sunset. It means everybody gets up around 5 in the morning, hurry up to go to a temple, take pictures for the sunrise, and then people go back to their hotels (usually between 8 and 10 in the morning). Then the rhythm slows down, people have a nap, have lunch quietly. It’s hard to have a walk in the middle of the day, it’s scorching outside! And there you go again around 4pm. People leave their hotels, rush to get on the temples to be the first ones and have the best spots, and then wait for the sunset to take pictures. Everyone admire this beautiful sight from a temple, before heading back to the hotel around 7-8pm to have dinner, etc… And it starts again the day after, and so on 😀 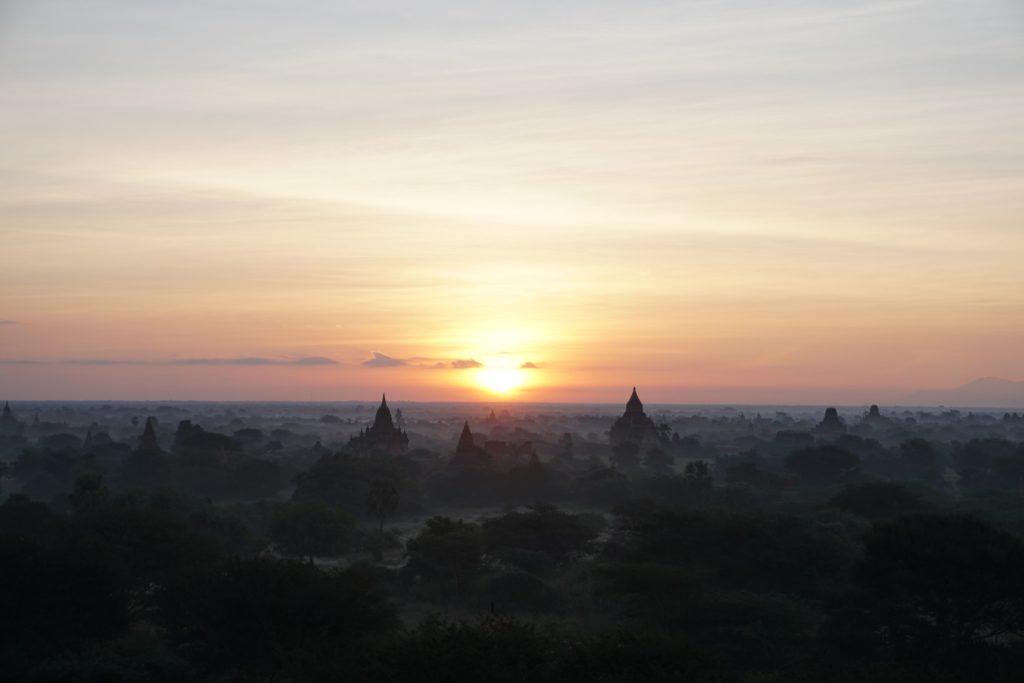 Before arriving in Bagan, I told myseld I’d only admire sunsets. I didn’t have the motivation at all to wake up at 5 in the morning for that! I like to sleep, so I’ll quietly wait for the evening to take pictures. But after my first day, finding out I had to get up early in the morning to see the hot air balloons, I told myself I didn’t really have any choice… 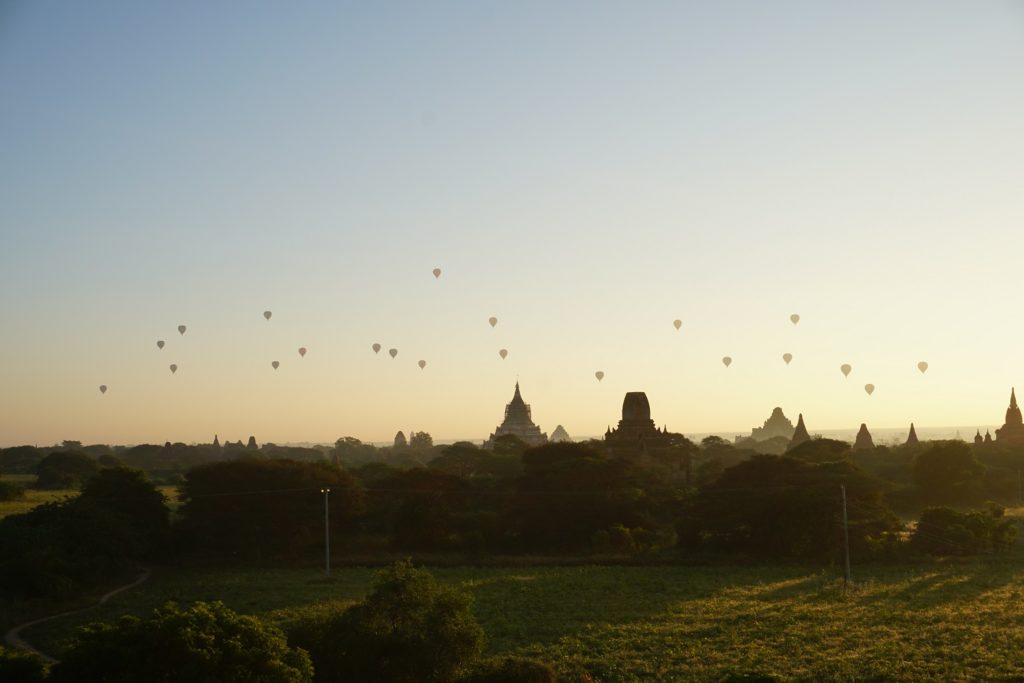 Pretty simple, there’s a challenge in Bagan. You have to find a temple with the best view possible, but also the least crowded possible. The equation is complex, but it’s not impossible to solve it. As you might imagine, the temples with the best views are crowded. And those less popular, well… We don’t see the hot air balloons well, or from afar. So you’ll have to use cunning… And we exchange the “good deals” “This temple is great, and it’s quiet empty” “This one, the view is awesome, but it’s sooo crowded!” “This one is overrated. Many people, and it’s very far from the hot air balloons“

The Shwesanda pagoda is the most famous and the most popular temple, either for the sunrise or the sunset. There’s a good reason this pagoda is popular. Apparently the view is awesome, the temples are close, and also the hot air balloons. Almost everybody goes there. Unfortunately I cannot tell you if all the fuss about the pagoda is worth it. I wanted to go but it was closed during my whole stay in Bagan. For those who wanna go there, you get it, you won’t enjoy the view by yourself, most tourists get on the Shwesanda pagoda. 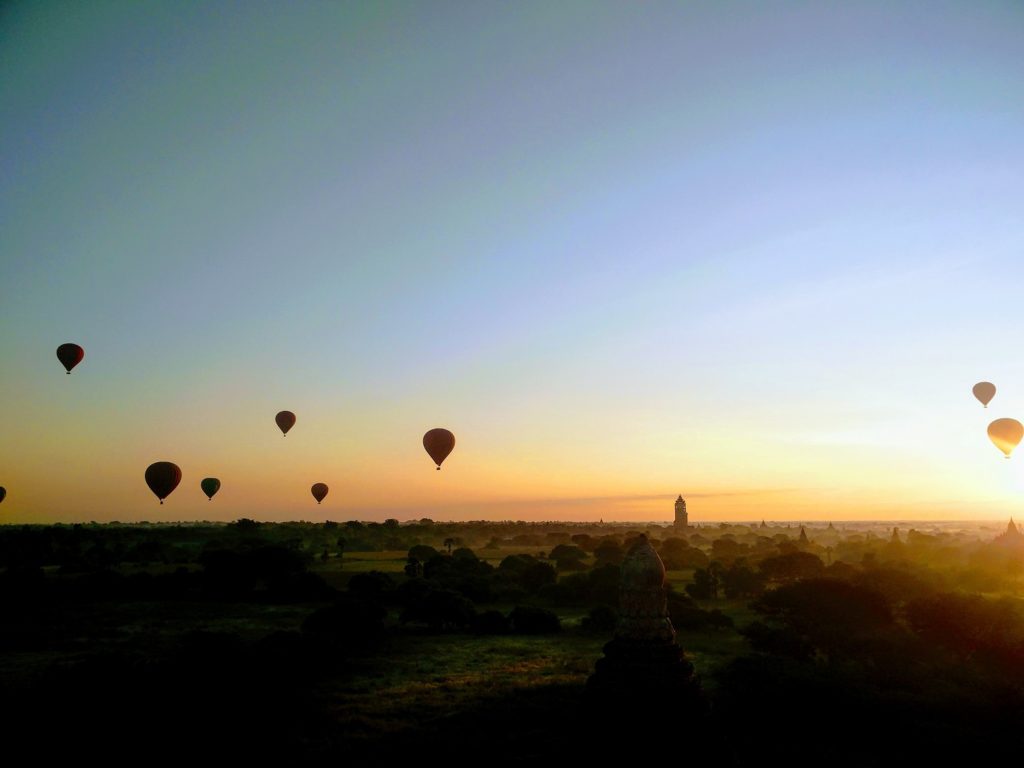 Therefore I had to find other ones. I give all the information about Bagan and the temples I visited at the end of the article but you need to know you won’t always win… People suggest you to go to a temple and you find out it’s very far, or it’s way too crowded. You also need to be prepared, unless you have a good equipment, don’t expect to take perfect pictures like the ones we see on the internet. Many people photoshop their pictures before posting them on social media (luminosity, hot air balloons closer on the picture than in reality…). 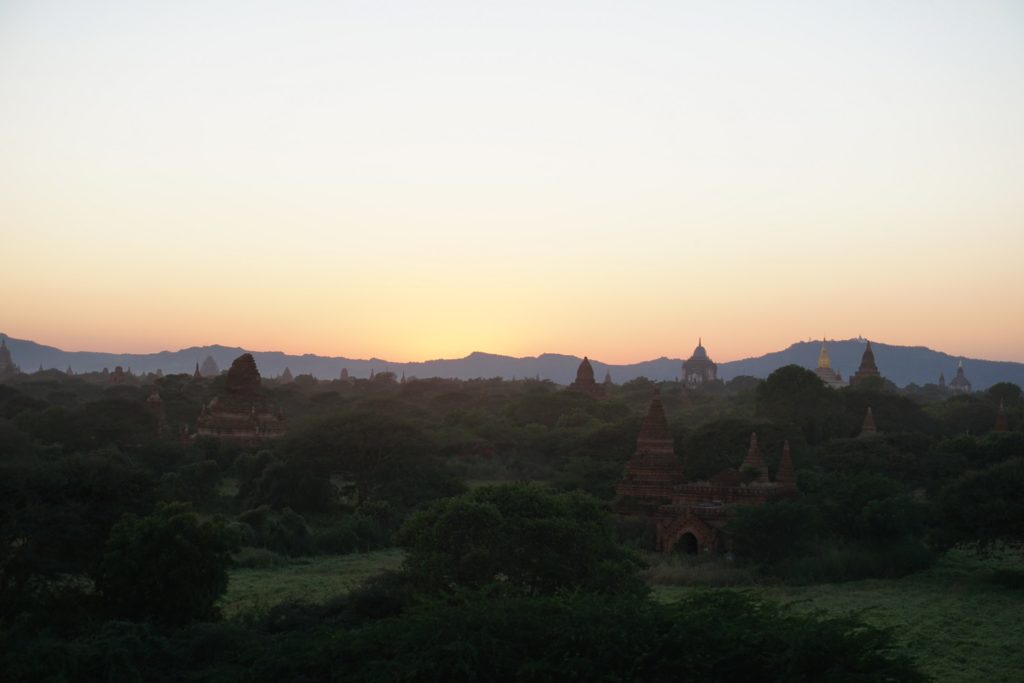 Around the temples, as usual you’ll see locals trying to sell you all kind of stuff. A Burmese guy asked me “Where you from?“, I said “France” and he replied in french “It’s cheaper than Leclerc!” (Leclerc is a famous French supermarket). I started laughing, I didn’t expect to hear this. But the day after, next to another temple, another Burmese guy said the exact same sentence. Ok I get it… They ask you where you’re from, and then come out with a sentence in your language they learned by heart. Two or three other guys told me the same thing… There was just one innovator I met. When I told him I was french, he said in french “It’s cheaper than Auchan!” (another french supermarket). Bravooo! But no, I won’t buy anything 😀

I saw three sunrises in Bagan. Some travelers told me I was very motivated and just admire one, then they content themselves with the sunsets every evening. We’re not in Bagan everyday, so I felt like I had to make the most of it. Yeah, during my stay I heard that some mornings, the hot air balloons don’t fly. Hundreds of tourists get up early in the morning for nothing (if I may say so). They wait from a temple, and the hot air balloons never come up (same disillusionment as my first evening in Bagan!).

I was also told that before arriving in Bagan, four days straight, the hot air balloons didn’t fly! Oh man, I would be sooo pissed! A whole stay in Bagan without seeing one single hot air balloon, damn! I was lucky, the hot air balloons were flying every morning during my stay. In fact, they make their decision at the very last minute, in the morning around 5am, depending on the weather. 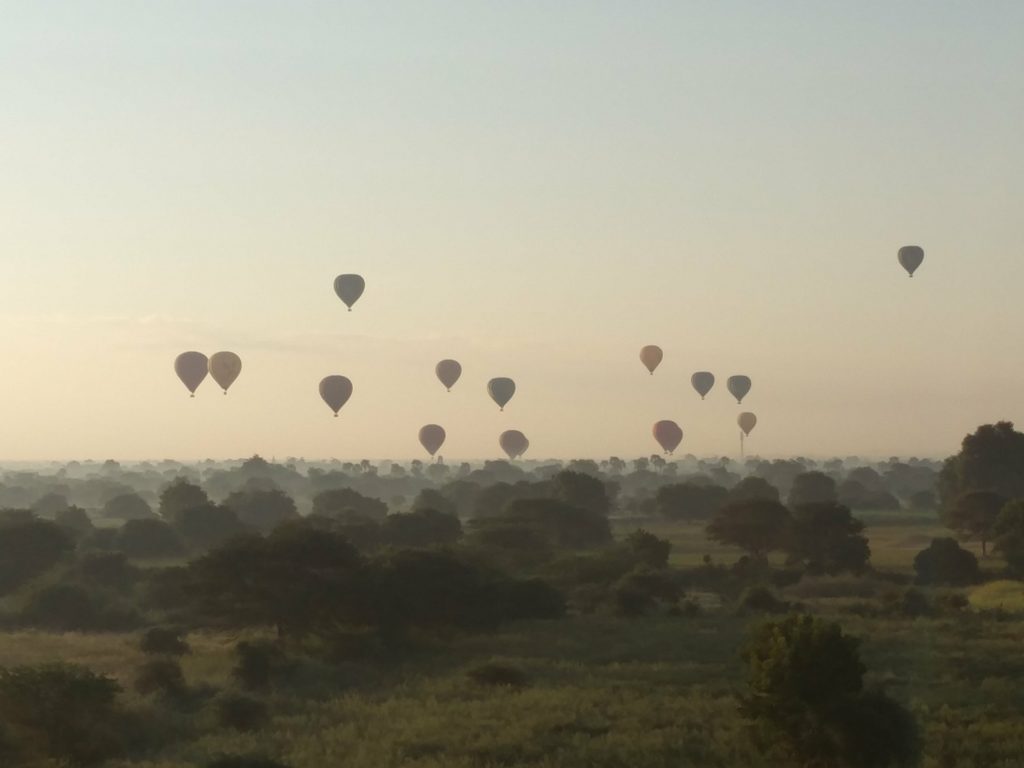 Oh and I also heard that it’s possible to go riding a hot air balloon in Bagan, which means you can admire the sunrise in the air! However, forget about it if you’re traveling on a budget, cause it’s about 400 US dollars for a 40-minutes ride. But call me Huggy Bear, it’s not impossible to ride a hot air balloon for free. Yes, for free, I’m not lying. You have all the information at the end of the article 🙂

Sunrise, sunset… Is there anything else to do in Bagan? If you didn’t have an overdose of temples already, then yes there are temples to visit. I visited a few ones and everytime I was almost the only visitor! People mostly go to Bagan to take pictures with the hot air balloons. So right after the sunrise, I visited the Shwezigon pagoda, the Ananda temple, Thatbyinnyu, the Tayoke Pyay temple, I passed by Bu Paya and also the archeological museum of Bagan which wasn’t opened yet, etc… Damn at 8am, the sun is already strong! I went back to the hostel around 10am and I was dying of heat!

All right so I have my pictures, I visited a few temples in Bagan, but people keep talking about a place to see, not too far from here, the Mount Popa! Okay, let’s go! It’s actually a volcano and on top of it, there’s a Buddhist monastery. Quite impressive but let’s be honest, Mount Popa is more impressive to see from the outside than from the inside. There are 777 steps to climb (believe me, it’s easier than you might think, and it’s a good way to stay active!). And once you’re up there… Well, it’s a classic temple. I was a bit disappointed, maybe because of all the temples I saw before this one…

I thought the trip to Mount Popa would take the whole day, but I was back in Bagan at 2pm (knowing the van broke down on the way back). Be very careful if you go there, put all your stuff in your bag (smartphone, camera

, even sunglasses, take ’em off!). Mount Popa is teeming with monkeys raised to steal tourists’ valuables, and once they have your smartphone/wallet/sunglasses, the locals will ask you for money to get your stuff back from the monkeys. You pay, they throw peanuts at them, and the monkeys give back what they pinched. It’s a common travel scam, be careful!

All right! After spending a few days in Bagan, it’s time to go. I highly recommend going there. Seeing the sunrise and the sunset is wonderful. The restlessness in the morning, the agitation in the evening… It’s funny to see this. Three days are enough to admire sunrises and sunsets, the temples in Bagan, and also Mount Popa!