Yerevan, a french city in Armenia

– Why are you coming here, in Armenia?

– All right… Oh I get it, you come here to visit friends who live in Yerevan right?

The guy at the customs exchanges a knowing look with his colleague, and then started jabbering in Armenian. I didn’t get a word except “tourism“, and they literally burst out laughing!

“Okay, said the customs officer, clearly pleasantly surprised. Welcome to Armenia!” and he stamped my passport!

Here we go! After a few hours spent in a van coming from Tbilisi (the driver was driving like crazy!), I left Georgia to go to Armenia, actually to go to its capital, Yerevan! In Tbilisi, a handful of drivers, all Armenians, patiently wait for passengers to go to Armenia. Once the van is full, they just go! I knew where to find them and of course, when they saw me, they asked me where I was from. When they found out I was from France, they went crazy “Woooooow! France!? We loooove this country! Charles Aznavour! Zinedine Zidane!” And I had a better treatment than the other ones 😀

And it was just getting started! I knew Armenia and France were in good terms and had a good relationship, but not to that extent! They say “Merci!” to say thank you, just like in French. In Yerevan, I saw the France Square, a few french cafés. Like Luang Prabang in Laos, you can really feel the French influence. They are also big billboards with Charles Aznavour on them, there’s a Charles Aznavour Square, and a Charles Aznavour Museum!!! It was closed during my stay in Yerevan, this museum in honor of the French singer exhibits his discs, books, awards, photos of the artist… For those who don’t know him, Aznavour is a French singer and has Armenian origins…

With all this, I almost felt like I was home! The Armenian people I talk to are charmed when I tell them I live in Paris. Aznavour’s name comes out systematically when I say I’m french. He’s not the only one of Armenian descent. I completely forgot this, but the Kardashian family is from Armenia, too! And some Armenian girls I talked to in a bar really wanted to remind me this “They’re from here, not from the US!” It’s funny though, I’m not even lying but some of them were looking like the Kardashians a bit! Anyway, references change, it really depends who you talk to…

Those girls I saw in the bar in Yerevan are not completely wrong. If you look at the family tree of the Kardashian family, a few generations ago, this family was still in Armenia. I don’t know them that much to tell you exactly when they migrated to the US, but it was probably around 1915. For those who where not sleeping during history class, 1915 is the year the Armenian Genocide took place. Estimations say 1.2 million Armenian were killed by the Ottoman government (Turkish people). To this day, Armenians hate Turkish people, because Turkey never recognized the genocide.

Turkey is not the only country Armenia despises. There’s also the neighboring country, Azerbaijan. But why? An area, Nagorno-Karabagh. After the USSR’s dissolution, Nagorno-Karabagh, populated by 80% of Armenian people, became part of Azerbaijan. Nagorno-Karabach wants its independence, or to be part of Armenia. And Armenia wants this region to be part of their country. Because of this disagreement, Armenians cannot go to Azerbaijan, and vice versa. No flights/trains/buses from one country to the other, and they’re like side by side. In Armenia, I tried to check Azerbaijan Airlines’ website, it was blocked… I had to use a VPN… Anyway, the conflict lasts for decades… 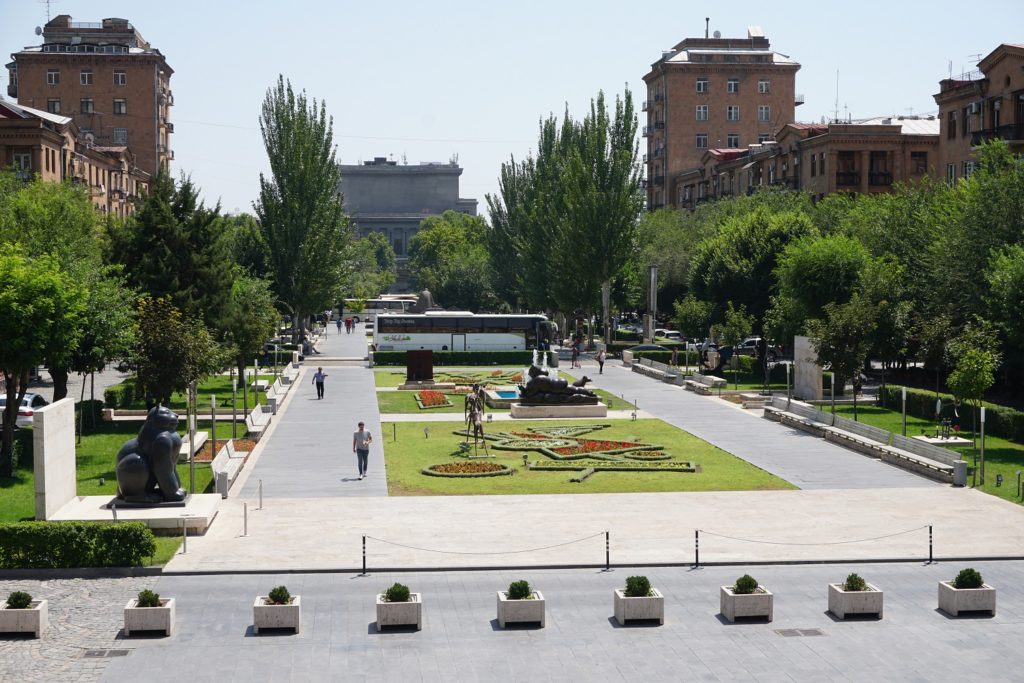 Walking around in Yerevan is enjoyable. Although this is the capital city, the traffic is not too dense. You’ll find a lot of bars, shops, groceries, etc… Located underground! A little bit confusing at first! A few times, I saw in the city play ping pong tables, and people playing. Since it was reaaally hot during my stay (37°C/99°F), I saw a lot of women in the streets with umbrellas to protect them from the sun (umbrellas, not parasols!). 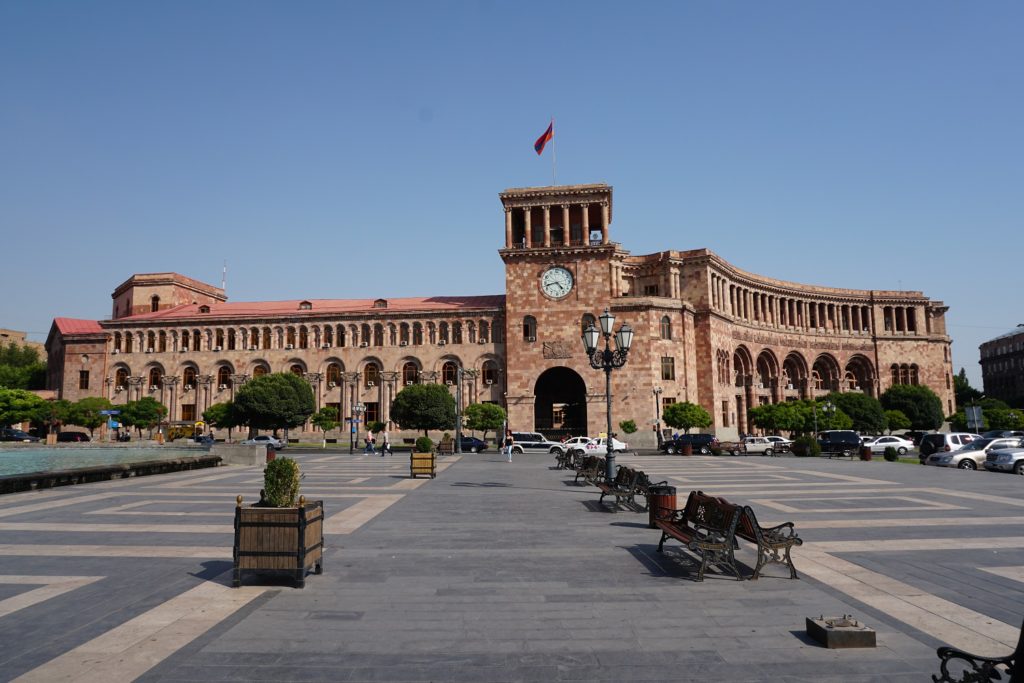 In the evening, go to Republic Square, in front of the History Museum of Armenia. You’ll see water jets in the fountain! Very beautiful, a lot of people are present to admire the water jets, mostly families. This is where I noticed that unlike Georgia, people come to me in the street just to say hi. I also noticed I get the “Can I get a picture with you?” a little bit more than before. It’s ok, it’s always asked courteously… But it always feels weird when the locals want to get a picture with you. 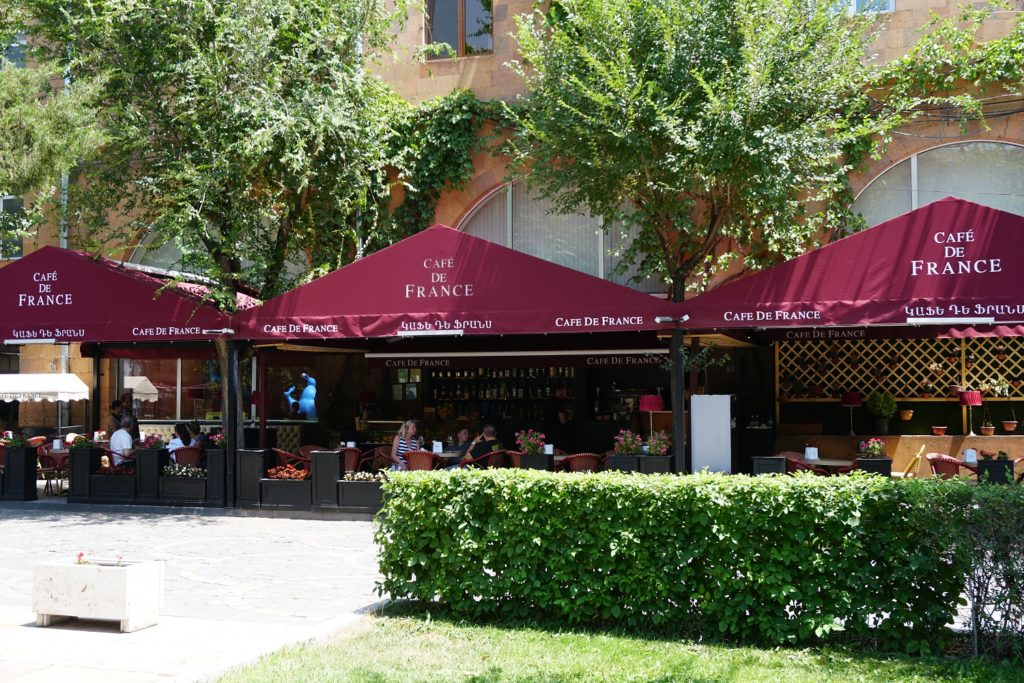 The armenian food is honestly good. They like to eat tabbouleh, and soups in general. If you go to Yerevan, I suggest you to test out the “Tavern Yerevan” restaurant (there are a few ones in the city), to eat typically Armenian food. As for alcohol, Armenia produces good red wine, but the Ararat is very popular! This is cognac!

Republic Square is a central place in Yerevan. This is where you’ll see the history museum of Armenia (haven’t been inside), but also the government of the Republic of Armenia, and a beautiful fountain in front of the museum.

Cascade complex is also very popular in Yerevan. From the outside, you’ll see stairs with fountains and gardens. From the inside, there’s the Cafesjian Museum of Art, an art museum with different exhibitions.

Yerevan is not a capital like the ones we’re used to see. There’s not too many people, and it’s enjoyable to walk around. Being french there helps, I can tell!