Oh wow! There’s a lot of money here! I spent four days in Hong Kong, and after backpacking Southeast Asia, the first thing that really struck me, is how rich Hong Kong is! Four days in Hong Kong and I feel like I’m living on another planet than the one I was living on for several months before getting there, in Southeast Asia. As I was doing my research about Hong Kong, I found out that one of out seven citizen is actually a millionaire! That’s a lot of millionaires in such a small place! Anyway, it makes a change from all the developing countries I visited just before, during several months. So I decided to spend four days in Hong Kong. Let’s see how it is… 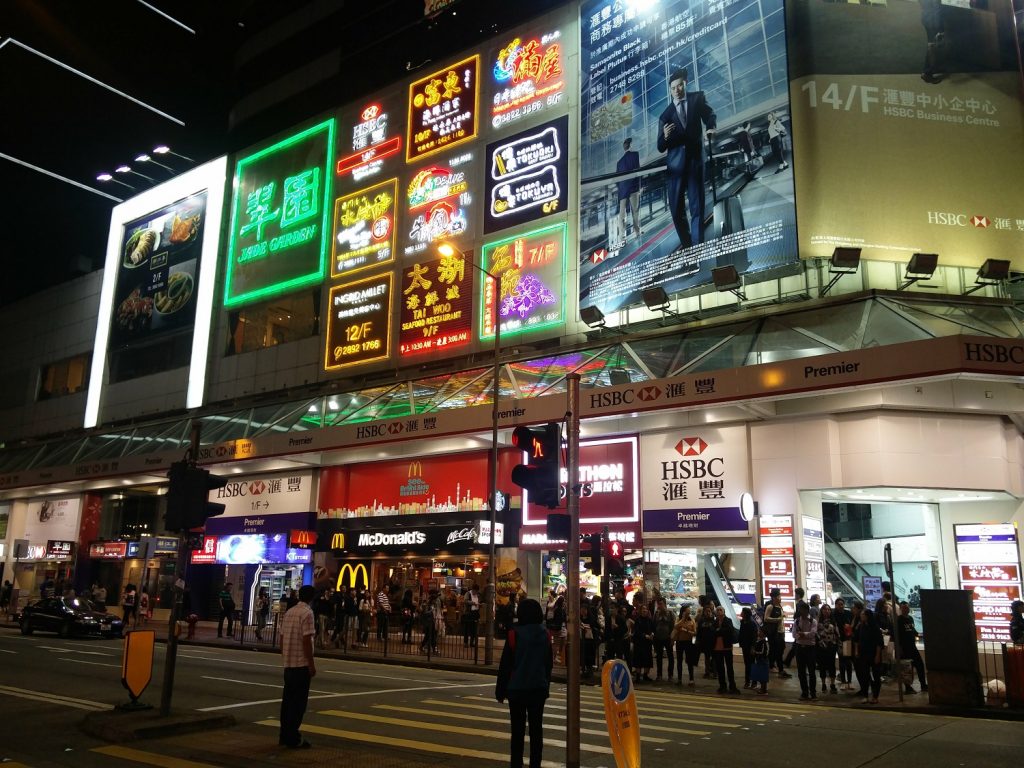 Hong Kong reminded me a bof of Singapore. Both places are rich and you can clearly see they have money. Moreover there are malls everywhere, we’re really in a consumer society! And the locals, they always have their eyes glued on their smartphones, that’s crazy!!! When they’re walking, in the subway, at the restaurant… They’re always doing something with their smartphones! And I can tell since I saw it, they’re all using Wechat (it’s like Whatsapp, but a bit better!).

Still, I felt like Hong Kong was more “authentic” than Singapore, in that the Asian culture is more visible here! The signs are not in English only, but also in Cantonese (by the way, everything is very clear!). The Asian art and culture is also a lot more present. But otherwise, and I repeat myself, Hong Kong is rich and you can feel it when you get there (I think the contrast was bigger for me, since I was coming from Southeast Asia). There are many beautiful cars in the street, always a lot of people outside with the latest smartphones in their hands, etc…

Taking the subway? They have TV in the subway broadcasting the news! Wanna have a drink? You’ll pay as much as in Western countries! Traveling on a budget? Forget about Hong Kong! Anyway, people here really respect all the rules and they show their civicism. The locals patiently wait on line to take the bus (I’ve seen this before in NYC…). I crossed the street while the light was red for pedestrians. Every single person glared at me!

In Asia, the locals go eating alone at the restaurant way more often than us Westerners. And the restaurants’ owners don’t hesitate to seat you with people you don’t know when you’re alone! I was at a table for two and they seated another solo guy in front of me, although many tables were empty… I think it’s just more convenient for them. Another time, I was seated next to a solo guy even though many other seats were free… We don’t do that in Europe.

What to do in Hong Kong?

The unmissable in Hong Kong, the place where everybody goes, the most populat spot, is Victoria’s Peak. That’s the highest point in Hong Kong, rising 550 meters (1805 ft.) above sea level and from there, you’ll enjoy a stunning view of Hong Kong, Victoria Harbor and Kowloon. Theoretically, the view is breathtaking. In my case, it was foggy when I was there, it ruined the beautiful view I was expecting… How to get to Victoria’s Peak? You have two options. You can either take Peak’s Tram (it’s 52 Hong Kong dollars the two-way trip -5.90€-). It takes about 10 minutes to go to the top. But you’re gonna wait for a long time to get in the tram…

I preferred to go all the way up by foot, it’s a good way to stay active. Be prepared, the slope is fucking steep! Once you get to the top, admire the view! It’s a very touristy place, there will be a lot of people there! On the spot, there are numerous souvenir shops but also two malls (once again!) with nice terraces offering a panoramic view of Hong Kong. The entrance to one of the terraces is not free ($43, almost 5 euros). The other terrace is free. There’s also a path called “Circle Walk”, a 2.8 kilometers (1.7 mile) circular path. If possible, go to Victoria’s Peak for the sunset and admire the view nighttime! A bit higher than Victoria’s Peak, you’ll find Victoria’s Peak garden. Few people make it there. Wanna know more? Read this article about Victoria Peak!

Head to the Hong Kong Heritage Museum! It’s free to get in, local art is exhibited there. I actually didn’t go to admire the Chinese art, but for the awesome exhibition dedicated to Bruce Lee (he’s from Hong Kong, in case you didn’t know!). We learn a lot about his life, his childhood, his teenage years, how he fell in love with martial arts, his legendary movies, the impact he had, his influence, his premature death, etc… This is very interesting, really, I strongly suggest you to go there, even if you’re not a fan! Unfortunately, it’s forbidden to take pictures…

Don’t miss Tian Tan Buddha, also called Big Buddha! It’s located on Lantau Island, in Ngong Ping Village, and he’s dominating the island, all the way up! Once again, the big Buddha is very popular, so you won’t be on your own (lots of groups there!). The big Buddha is 34 meters (111 ft.) high and is seated towards mainland China. Be prepared, you’ll have to climb 268 stairs before getting to Big Buddha! Next to the big Buddha, you’ll find Po Lin monastery, one of the most important Buddhist monasteries of Hong Kong. Take some time to visit Ngong Ping Village, it’s nice to have a walk there. Wanna see the big Buddha? You have all the info at the end of the article.

If you have some time, go visit the Ten Thousand Buddhas monastery! It’s a Buddhist temple located in the north of Hong Kong, completed in 1957. Actually you won’t find 10000, but 13000 Buddhas on the spot! Unlike “classic” monasteries, this monastery doesn’t have any monks living on site.

If you wanna stay active, go hiking! I wanted to do the MacLehose Trail but I didn’t have enough time… So I did another hike, way more famous and popular, the Dragon’s Back! I went there on a Sunday, it was packed! People all over the place! The slopes are gentle and honestly hiking there is not hard. You can also admire the surroundings when you’re up there.

Wednesday is a special day in Hong Kong. I just stayed four days in Hong Kong and unfortunately, I wasn’t there on a Wednesday. On Wednesday evenings, go to the Hippodrome Valley to watch the horse races! To be completely honest with you guys, I’m not into horse races at all but everybody says you have to go, cause the atmosphere is so cool, relaxed, social, etc… Wednesday also means ladies night! Free alcohol for the ladies in Wan Chai, one of the city’s more notorious districts! Ladies, think about it if you’re in Hong Kong on a Wednesday!

There are many other things to do in Hong Kong : take the Star Ferry (it’s a 5-minutes ride on a ferry), have a walk in the Nan Lian gardens, have another walk on Bowen Road (a nice pedestrianized road), have a drink on a rooftop, there are plenty of them in Hong Kong, however it’s expensive (I went to the one in IFC Mall) taste some dim sum (fully cooked, ready to serve dishes, it’s Hong Kong’s signature dish…).

Hong Kong is not really a backpacker city. However, I liked my stay there. It’s a good mix between Western and Eastern culture, old and new, and I found the locals friendly. Three days are enough, but four days in Hong Kong, it’s perfect!