My stay in the south of Sri Lanka didn’t start out well. I’m starting to get used to the dumb customs officers… People told me before getting there “The locals in Sri Lanka have such a prejudice against black people. They think they’re all drug dealers, or doing suspicious business. In the street, people will probably ask you if you have drugs to sell, and when you’ll get in the country, the customs officers will annoy you, for sure!” Not really different from India I guess… It’s fucking crazy when you know how the locals look like in Sri Lanka, to have such a prejudice against black people!

And yes, it had to happen. After having my passport stamped, and just before leaving the airport, a customs officer called me and bombarded me with questions “What are you doing here? Where are you going? Don’t tell me you’re coming for tourism? You’re selling jewelry right? (Importing and selling jewelry is a big business in Sri Lanka!) Hey I didn’t even notice! There are many stamps on your passport! You’ve been traveling for a long time! How come? You must have a lot of money to be able to travel that long, kinda weird… Oh but you went to Iran!!!??? Why the hell did you go there??? People don’t go to Iran for tourism!”

And they thoroughly searched through my bag, they took out everything, turned the bag upside down, inspected every single pocket! The big backpack

, everything, everywhere… And they didn’t find anything! Damn you had to see their faces, so pissed off! Is it ok now? Fucking idiots, assuming I’m a drug dealer because I’m black! I’m not importing drugs, you’re wasting your time, and because of you, I’m wasting mine!!!

Oh and as if it wasn’t enough, in the taxi from the airport to my hostel, the driver did everything he could to get more money from me than the price we agreed upon beforehand “We can take the highway if you want to, it’s faster, there are less cars but you’ll have to pay an extra!” “No thanks” “I can put the AC on if you want to, but you’ll have to pay a little bit more” “No thanks” I said, lowering the back window and facing the wind with my face. “I have some snacks if you want to, but they’re not free…” “NOOOOOO!” Seeing the expression on his face when I left the car, I clearly understood I wasn’t a good customer for him! I don’t give a fuck!

Here I am in Sri Lanka! I heard many beautiful things about Sri Lanka, and it was time to see by myself how the country actually is. We’re just next to India, and to be honest, it’s almost the same culture. The food, the way they look, the culture, even the attitude (the famous Indian headshakes!), there are many things in common. Cricket is also the most popular sport. Still, there are a few differences (same same… but different!). The food is more or less the same, although a bit different. Still, it’s delicious. Wanna know more? Here’s Sri Lankan food you have to taste!

Sri Lankans are a lot more relaxed than the Indians. After spending a few weeks in India, you really feel like Sri Lankans are very kind (which is the case by the way!). And also smiling! Some of them greet me in the street, cars stop to let you cross the street, tuktuk drivers are still on the lookout for potential customers, but they’re way less insistent than in India. They might be a little bit too kind sometimes, some of them asked me if I wanted to have women “to have a good time“. Check this detailed article for more Sri Lanka travel tips.

Since the atmosphere was more relaxed than in India, I slowly dropped my guard. Cause… yeah I was always on the alert during my stay in India, wary of the scams. And it’s time to explore this country I kept hearing about. I started my trip visiting two cities in the south of Sri Lanka : Colombo, the capital, and Galle, in the south of Sri Lanka. I also spent a few days in Mirissa Beach. I don’t count Negombo, this is the city where the airport is. I also spent a few days there but there’s nothing to do… If needed, here’s a two-week Sri Lanka itinerary!

Colombo will probably be the first city you’re going to visit if you go to Sri Lanka. Even though I spent a few enjoyable days in the city, I wouldn’t recommend to stay there too long. Let’s be honest, there’s not much to do in the capital of Sri Lanka. It’s a beautiful city, but there’s nothing special. Since Colombo will probably be the first step of your trip in Sri Lanka, here are a few places to see.

The Independence Memorial Hall, on Independence Square. This memorial commemorates the independence of Sri Lanka, independent country since 1948. At the head of the memorial is the statue of the first Prime minister of the country, Don Stephen Senanayake. There are celebrations there every year for the national independence day (February 4th), otherwise it’s basically the youth sitting there chatting, playing cards, checking their phones…

The national museum of Colombo is the largest museum of the country. It was established in 1877! Inside, there are many historical items of Sri Lanka (throne of former kings, crowns…). And there are also exhibitions about the history of the country. I can’t say more, I didn’t get in.

There’s also Colombo fort, which is the business district of Colombo, the dutch hospital shopping precinct, a former hospital turned into an outdoor mall (kind of!) with cafés, restaurants, shops… And of course, don’t forget to have a walk along the beach but be careful, the sea is very choppy!

After visiting Colombo, let’s head to Galle, in the south of Sri Lanka. I also heard a lot of good things about this city. When I arrived at the Colombo train station to go to Galle, several times old men came to me, just to chat “Where are you from? How long are you staying here? etc…” When I was telling them I was going to Galle, the reactions were all the same “Why do you go there? That city sucks! And expensive, still wondering why! Skip Galle, and go straight to the beaches in the south!”

I think they’re a bit harsh with Galle. They’re right, eating outside is expensive (for the country, everything is relative!), but once again, I thought the city was enjoyable. Admittedly, there are not many tourist attractions, but it’s a beautiful city. There’s also the beach not too far. From the beach to Galle, you have to walk a few minutes. 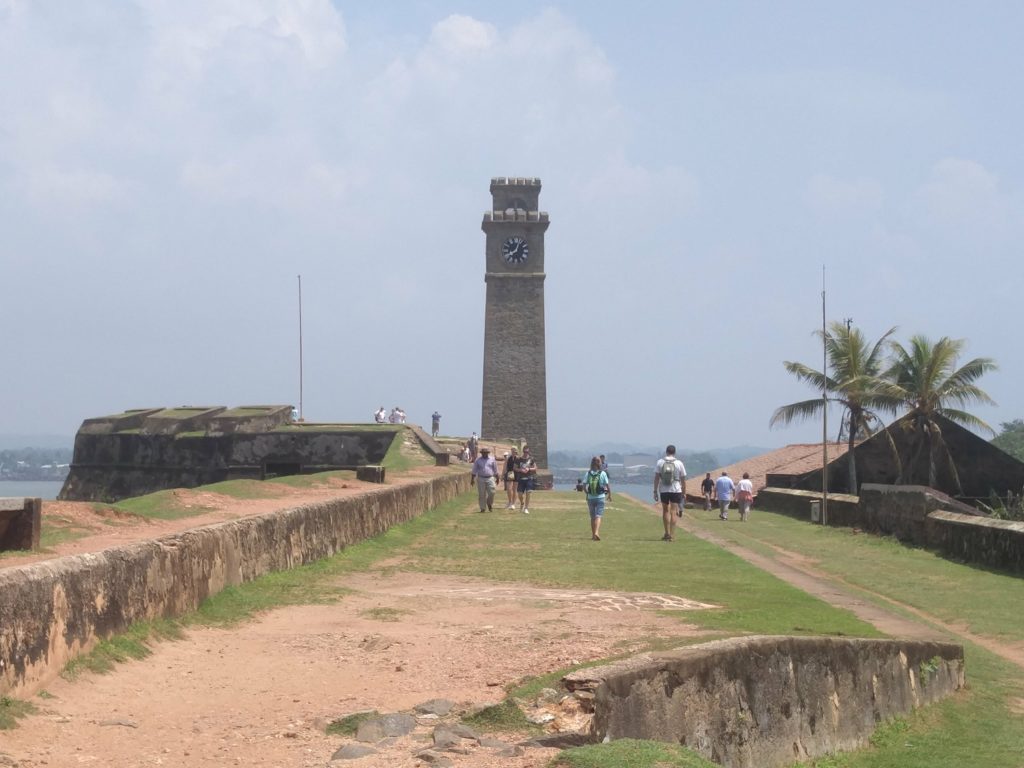 Galle, which is on the coast in the south of Sri Lanka, is a fortified city built by the European colonists. Indeed, the city was occupied by the Portuguese, then the Dutch and finally the British. Walking around in the little streets of the city, and looking at the architecture, we can clearly see the city was colonized by Europeans in the past. It’s actually a mix between European and South Asian architecture. Looking around you, you can also see local women, with their umbrellas open, to protect themselves from the sun, and men trying to find a way to kill the time. Many people greeted me in the street there, just to say “Hi!“, and many locals were staring at me, looking surprised. Oh and several times, guys came to me to ask if I was selling weed… 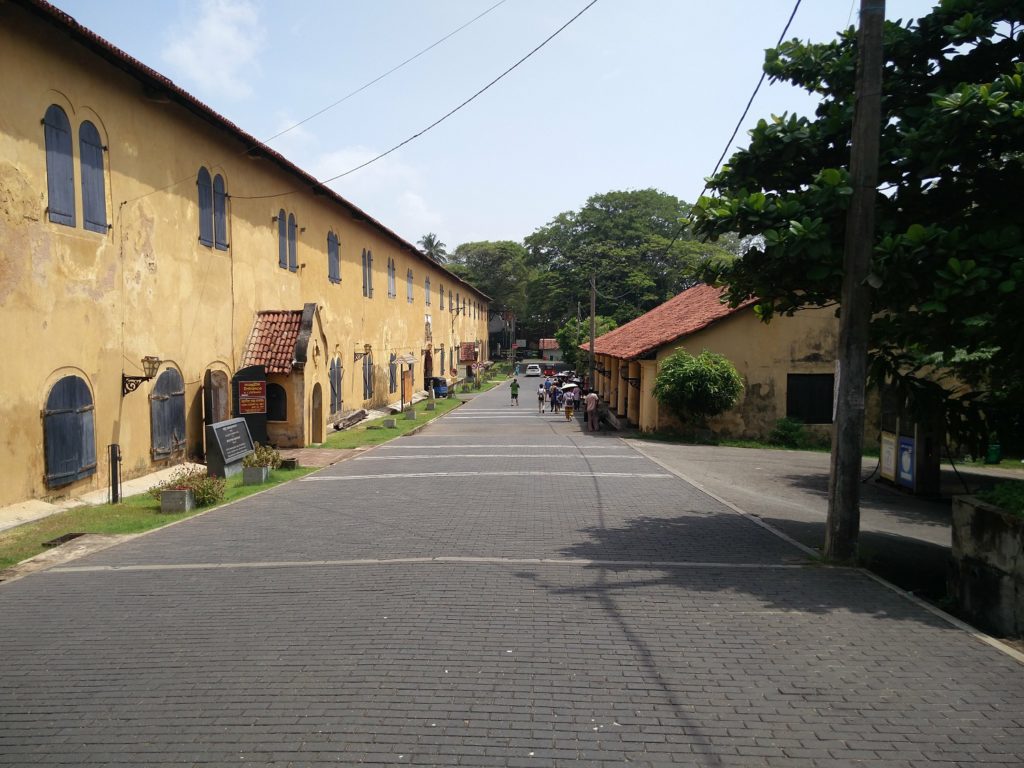 I spent a few days in Galle but you can easily visit the city in just one day. The main reason to go to Galle is the old town, where it’s enjoyable to have a walk. You can also visit St. Mary’s cathedral, the Dutch church, go to the national museum, see the fort, have a walk along the beach… A simple town, but definitely worth paying it a visit! 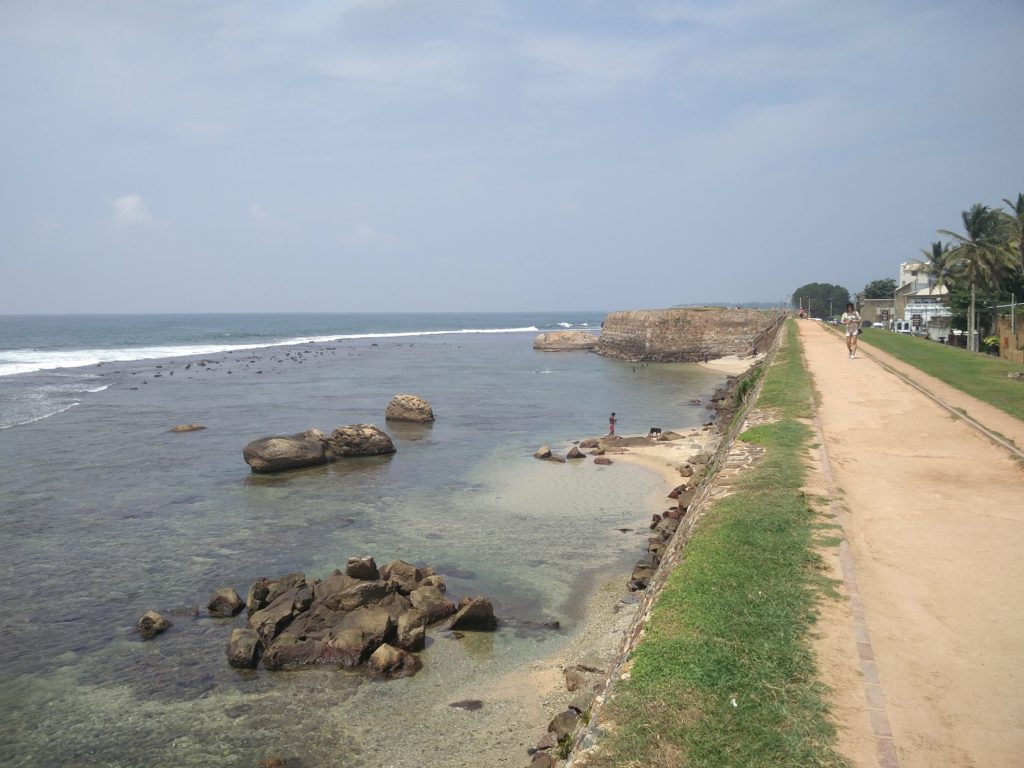 It’s time to relax a little bit, let’s go from Galle to Mirissa Beach, in the extreme south of Sri Lanka! It’s one of the most famous beaches in the country. From what I heard, it can be packed, depending on the period of the year you go there. When I was there, it was quiet. Yes, there are tourists, but not many. Perfect to chill…

As you walk along the beach, there are many bars and restaurants. And stands for surf lessons. Oh and apparently, Mirissa Beach is known for its whales shows. Again you’ll see billboards in the city, guys coming to you for “a great whales show!“, stands on the beach… This is one of the first thing the guy from my guesthouse told me “Wanna see a whales show?” Not my cup of tea but check this article to find out more about whale watching in Mirissa.

Honestly, visiting the south of Sri Lanka was enjoyable. There are not 15000 tourist attractions, but the places I visited were nice. You just take your time, without stress, and the locals are kind and smiling. Colombo is not a must see, but I definitely suggest to stop by Galle, and spend a few days on the beach in the south.