Osaka is often overlooked by the Western tourists. That’s a shame, they don’t know what they’re missing. I loved my visit of Osaka. It’s not a city-museum like Kyoto, there are probably less things to do in Osaka, but I loved the vibe, the atmosphere of Osaka during my visit.

For instance, Japanese are usually relatively discreet, a bit self-effacing and withdrawn. In Osaka, the locals are a lot more relaxed than anywhere else in the country. Really, they’re cool, warm and funny, which contrasts with the Japanese of the other cities. Inhabitants of Osaka are really different! It’s possible to start a conversation easily with them, they smile more there, you can even see some of them crossing the street when the light is red for the pedestrians! Crazy! Even at the bar, I was able to exchange ideas with the locals, which is something definitely not easy to do in the other cities. Therefore I was in good mood during my visit of Osaka. 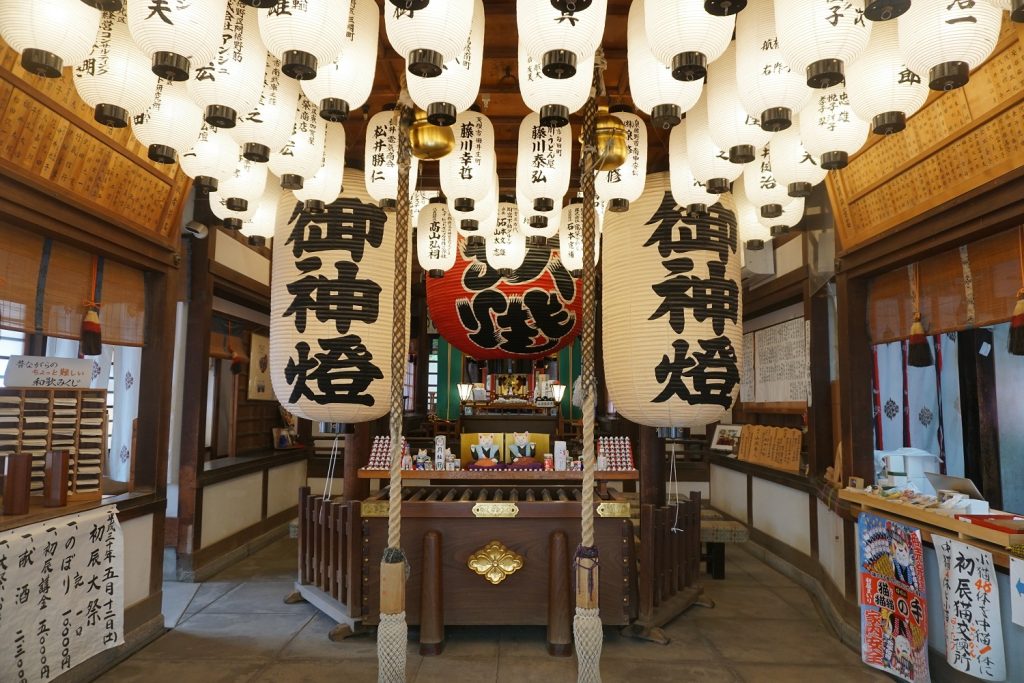 Osaka is the third biggest city in Japan (after Tokyo and Yokohama). It was the capital of the country from 645 to 655, and again briefly in 744 and 745. Osaka is also home to the oldest Buddhist temple of Japan! Osaka was severely damaged during World War II, and the reconstruction was a lot longer and less organized there than in other cities like Hiroshima or Kobe.

In Osaka, you’ll see almost everywhere a drawing of a tall athlete running, hands in the air (he’s probably finishing his run!). I wondered several times “Who the hell is this?”, we see him all over the place, sometimes drawn on a red background, sometimes on a blue one. After a little bit of research, I found out he’s the mascot of the city. It’s actually the mascot of Ezaki Glico, a Japanese food company manufacturing confectionery products such as chocolate, ice cream… It was first the mascot of this company, but over time it became the mascot of the city.

Unlike Kyoto where the city falls asleep right after the sun sets, there’s an important nightlife in Osaka. It’s possible to rediscover the city nighttime, but also have a drink at the bar, party ’til the break of dawn… By the way, that’s what Osaka is known for, the place to be for the party animals. While we’re at it, even though Osaka is the third biggest city in Japan, the cost of living is a bit lower than elsewhere, especially regarding accommodation. Therefore it’s more interesting financially to stay there if you plan to do day trips to the neighboring cities (Kobe, Nara, Kyoto). Anyway, let’s see what to do in Osaka. 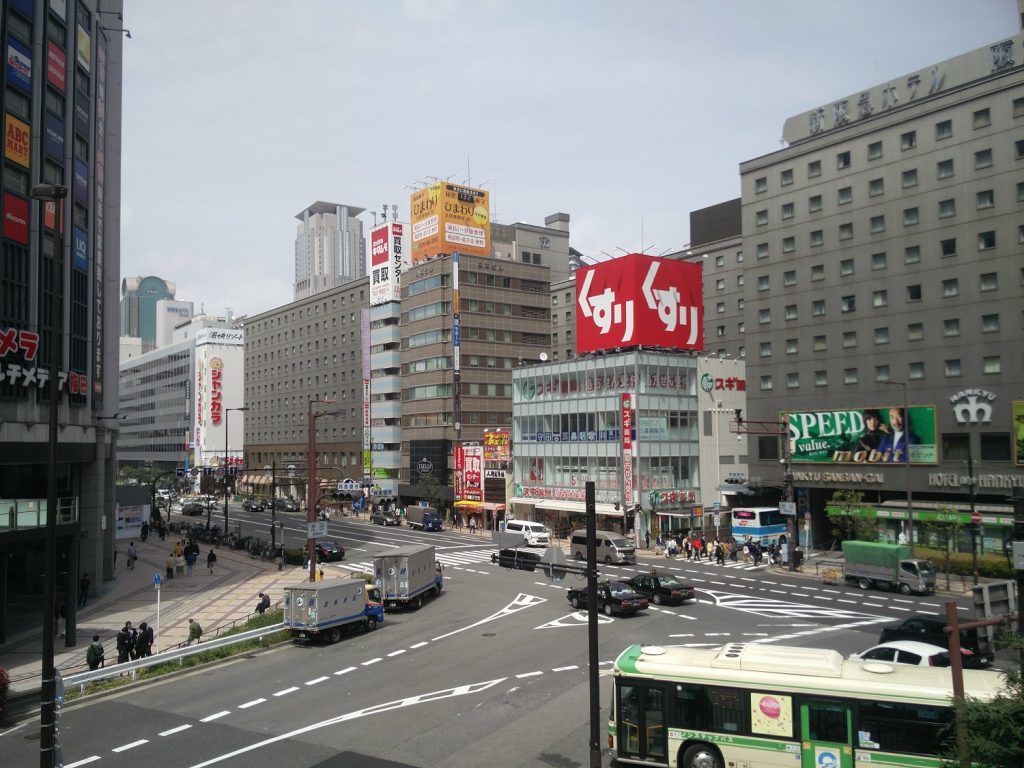 One of the most famous castles in Japan, Osaka castle. It was built in 1583, and it played a major role in the unification of Japan in the 16th century. It was destroyed during World War II, buth they were able to rebuild it. Inside the castle, you’ll find a museum relating the history of Osaka, Japanese works of art are exhibited, and you have a view of the city on top of the castle. To be honest, visiting the museum is not necessary… It’s 600 yens (5 euros) to get in. I noticed the Japanese knock the entrance door of the castle before getting in. I don’t know why… If you decide not to get in the museum, it’s still possible to have a walk in the park surrounding the castle, it’s big and very beautiful. If you’re into castles, don’t miss the Himeji castle, it’s not far from Osaka! Here’s more info if you consider doing a Himeji castle day trip!

I talked about it earlier, Shi Tenno-Ji is the oldest Buddhist temple of Japan, it was built in 593… by Korean guys! It’s quite big inside, in fact there are four or five entrances to get in there. A nice temple! It’s possible to relax in the surroundings, you’ll see several locals just chilling there, but few tourists. It’s 300 yens (2.50€) to get in the temple. A little bit further, there’s also Tennoji park, which is not bad 🙂

Sumiyoshi-Taisha is a complex of several shinto shrines located in the south of the city. It’s dedicated to the three shinto gods, the sumiyoshi sanjin. You’ll notice there’s a finial on the roof of the shrines, which looks like a fork. It’s really nice to have a walk there, it’s not in the city center, so there are less people and it’s quieter. When you get there, you’re immediately amazed by the canal and its bridge. Supposedly, Sumiyoshi-taisha dates back to the 3rd century, which would make it the oldest shrine in Japan! A lot of locals go there for the New Year. It’s free to get in.

Shinsekai is a lively neighborhood of Osaka. Shinsekai means “New World” (I know that thanks to One Piece!). This neighborhood was built in the early 20th century. In fact, the main goal was to mimic the atmosphere of the big Western cities like New York City, London, Paris… The result is quite… special 😀 I invite you to go see Shinsekai but the atmosphere there is a bit quirky, rather eccentric. Shinsekai is the place to be if you’re into shopping. In Shinsekai, you’ll also see Tsutenkaku, a 103-meters (337 ft.) high tower. It’s possible to get on top of the tower if you want to, but I didn’t do it. It’s 700 yens (almost 6 euros).

Dotonbori is a street you cannot miss in Osaka. It’s probably the most famous street in Osaka, and this is where everything happens from nightfall : malls, restaurants, clubs, karaoke, fluorescent lights… The restaurants there are a bit expensive but if you go to the adjacent streets, it’s a lot better regarding the prices. Dotonbori is located in a neighborhood called Namba, and it’s really the ideal area to go party. In this neighborhood, don’t miss the Kuromon Ichiba market, a big indoor market where you can taste the region’s specialties, mostly the takoyaki (those are ball-shaped Japanese snack filled with octopus).

About 15 kilometers (ten miles) away north of Osaka, it’s possible to admire the Mino Falls. You have to go to the Minoo subway station, and from there start a 2.5 kilometers (1.5 mile) hike to see the falls. It’s a good way to stay in shape! Frankly the hike is easy, you’ll see numerous couples there but also old people, locals going jogging… During the hike, you’ll see temples, cafés, shops… There’s even an insect museum for those who are interested (it’s 270 yens to get in, 2.25€). We finally make it to the fall, beautiful 🙂

There are even more things to do in Osaka. I’m especially thinking about the Universal Studios theme park. I saw the price and decided I wouldn’t go! It’s about 7000 yens (60€). Next to Universal Studios, you have the Kaiyukan aquarium and the Tempozan ferris wheel. Those are activities you can do if you’re traveling with your partner or your family, a bit less when you’re traveling solo. In Osaka, there’s also the Umeda Sky Building, a 150-meters (500 ft.) high skyscraper. It’s possible to get on top. There’s a museum I wanted to see, the Cupnoodles Museum. It explains the history of ramen, exhibits ramen bowls… I arrived there at 4pm, the museum had just closed…

I really liked my visit of Osaka. It was probably my favorite place, less for the beauty of the city than the mentality of the locals there, so different from the Japanese in other cities. I really had a good time. If I had to pick place where to settle in Japan, it would be Tokyo or Osaka! Don’t skip Osaka if you go to Japan!