Visit to the Angkor temples

My visit to the Angkor temples didn’t come off so well. Let’s say my visit didn’t come off as well as I thought it would, or not exactly how I was expecting it to be. It’s partly my fault, but I’m not the only one to blame. You must be like “How dare you!? How can you not enjoy your visit of the Angkor temples?” No no, it’s not that I didn’t enjoy the visit. The problem is probably the fact that I set my expectations too high. A few things annoyed me (more on that later), but I never said the Angkor temples were ugly! 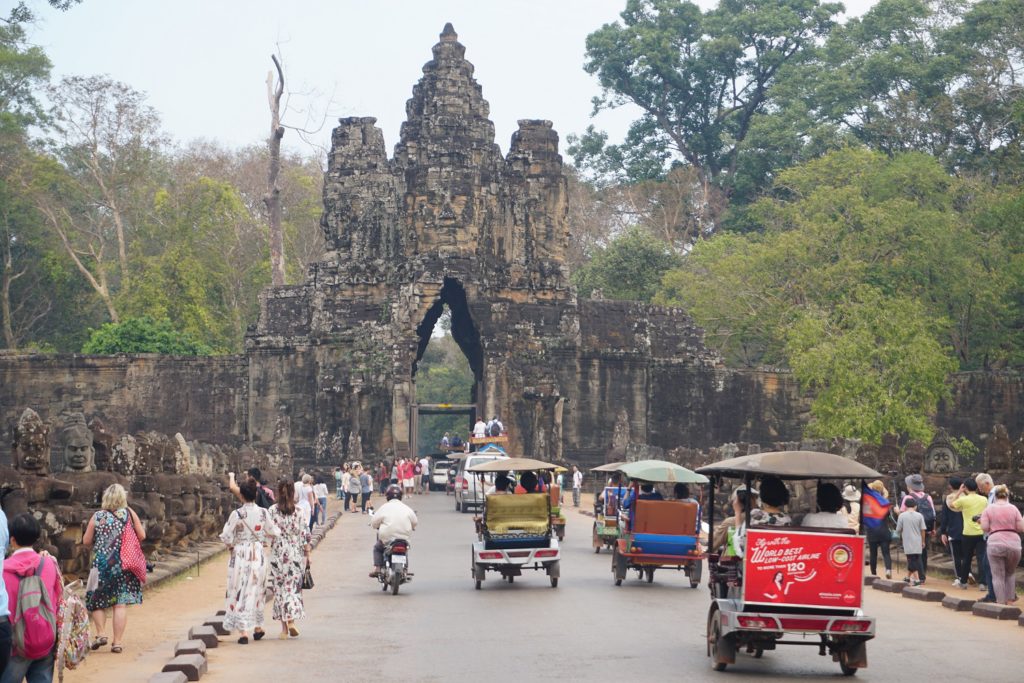 The very reason most people visit Cambodia? To visit the Angkor temples, the main tourist attraction of the country. Angkor was the capital city of the Khmer empire, a flourishing empire from the 9th to the 15th century. At its peak, the Khmer empire had a population of one million people. The different kings succeeding one another built their temples in the area. Most of the temples still present now were built during the 12th century. The Khmer empire was on the decline around the 15th century, and the temples were more or less forgotten… until the 19th century when Henri Mouhot, a French explorer, rediscovered the Angkor temples. Wanna know more? Here are 25 Angkor Wat facts.

Nowadays, you get it, it’s possible to visit those temples, a UNESCO World Heritage Site since 1992! I won’t dwell on my visit of the temples, what I did, what I saw, etc… This article will be quite succinct cause there’s already plenty of information you can find online about the Angkor temples. I’ll let you know further down how I felt about my visit. At the end of the article, I’ll give you essential tips, things to know… so that everything goes smoothly if you plan to go there one day.

The Angkor temples spread over dozens and dozens of kilometers (I said it earlier, it was a former empire). Today, some temples are more famous/visited/popular than other ones. There’s one temple you cannot miss, Angkor Wat, built in the 12th century. All the visitors get in front of this temple very early in the morning to admire a beautiful sunrise, and sometimes for the sunset as well (like Bagan in Myanmar!). It’s the largest religious monument in the world, and Angkor Wat is a big pride of the country (yes, that’s Angkor Wat you can see on the Cambodian flag). There are many galleries in this temple, recounting the social life of the Khmers, and it’s possible to get on top of the central tower to have a nice view. Interesting.

And another one very popular : Ta Prohm. Why that? This is where Angelina Jolie played the role of Lara Croft in Tomb Raider! Unlike the other temples, this one hasn’t been restored, and it’s more or less in the same condition as when it was discovered. Theremore many plants and trees invade this temple.

Preah Kahn made me think about Ta Prohm a little bit. Trees are inextricably linked with the temples, but Preah Kahn is a lot bigger. Although it’s a large temple, it’s still very crowded. The sculptures are also stunning, admire them! Preah Kahn is a must see!

There’s also Neak Pean, a small temple not that impressive. You have to walk on a footbridge to get to this one. Bakheng Hill is the place to be for a nice sunset (but it’s packed!), Pre Rup is another spot for a sunset (less people there), and there are other temples : Ta Som, Banteay Srei, Banteay Kdei, East Mebon, Ta Nei, Beng Mealea…

How I felt about my visit of the Angkor temples

After visiting the Angkor temples, I honestly had mixed feelings. As I said in the first paragraph of this article, maybe I set the bar too high. It’s probably due to the fact that I read so many articles praising the temples, I saw so many stunning photos… Yes the Angkor temples are wonderful and unmissable if you go to Cambodia, but after visiting the temples, there was an aftertaste of disappointment.

I could have said it in each paragraph, but visiting the Angkor temples, you’ll notice we’re all squeezed in together, there’s always someone glued to you. It’s partly my fault, I didn’t get organized well and I followed the “classic” tour, which means following the same itinerary as all the other groups of tourists. But still! People all over the place (many big groups of Chinese tourists!). It quickly gets unbearable. The Angkor temples attract millions of visitors each year. I suggest you not to expect a relaxing place, where you can admire temples taking your time… There are people everywhere, and sometimes the staff asks you to move on because other groups are coming!