You’ve probably heard about, or even seen from your own eyes that famous Indian headshake. We don’t really see it in the north of India (although it’s present there). But the more you head to the south of the country, the more the headshake gets visible. When I finally arrived in the south of India, in the state of Kerala, I noticed they were all using it. To say yes, to say no, to express perplexity, to acquiesce… I have to admit it, it’s quite funny. An Indian guy talking, and his friend doing those little head bobbles from the left to the right to agree. I saw this headshake in Sri Lanka, Nepal, and Bangladesh as well.

With Goa, it was the only area where I was able to really interact with Indian girls (they’re all very nice!). The state of Kerala reminded me of the Caribbean islands. The architecture, the state of mind, the attitude, the food, even the way they look! It’s understandable. Like the Caribbean, this state was occupied by various countries. First the Portuguese, then the Dutch and the British after that. At the time, the state of Kerala was selling a lot of spices to the Middle East area. To this day, if you have a walk there, you can still see maaany small shops selling all kind of spices.

Kerala reminds me of the Caribbean but let’s not forget that I’m not there, but in India! Although there are less aggressive than in New Delhi or Jaipur, tuktuk drivers are still on the lookout for potential customers. After having a conversation with one of them (yeah I talk to everyone, even guys on their tuktuk!), I understood why they were so insistent. It’s not really a scam, but when a tuktuk driver brings a tourist in certains shops, they get a coupon granting them one liter of free gas. I had to go on the other side of town, so I found a deal “Take me to the other side of town for free! In exchange, you can stop at three different shops and get your coupons. Everytime I’ll leave after a few minutes without buying anything!” Win-win situation 🙂

So far, I talked about the state of Kerala as a whole, but there are several cities to visit. I visited three different places in Kerala. First Kochi, this city can be visited quickly, then the backwaters, a must see in Kerala and then the city of Munnar and its tea plantations. You can also check this 7-day Kerala itinerary. Kerala is also called God’s own country. It comes from the tourist office of Kerala, they wanted to attract tourists and it actually worked!

This is usually where most tourists start their visit of the state of Kerala. I heard many things about Kochi before getting there, how superb, wonderful this city is, etc… I have to admit I was a bit disappointed, even though the city is beautiful, and walking around Kochi is enjoyable. I had a very good meal for only 130 rupees (1.75€) in a restaurant where I was the only tourist. However, once again, they think I’m a drug dealer. Several Indians came to me “Do you have ganja?” 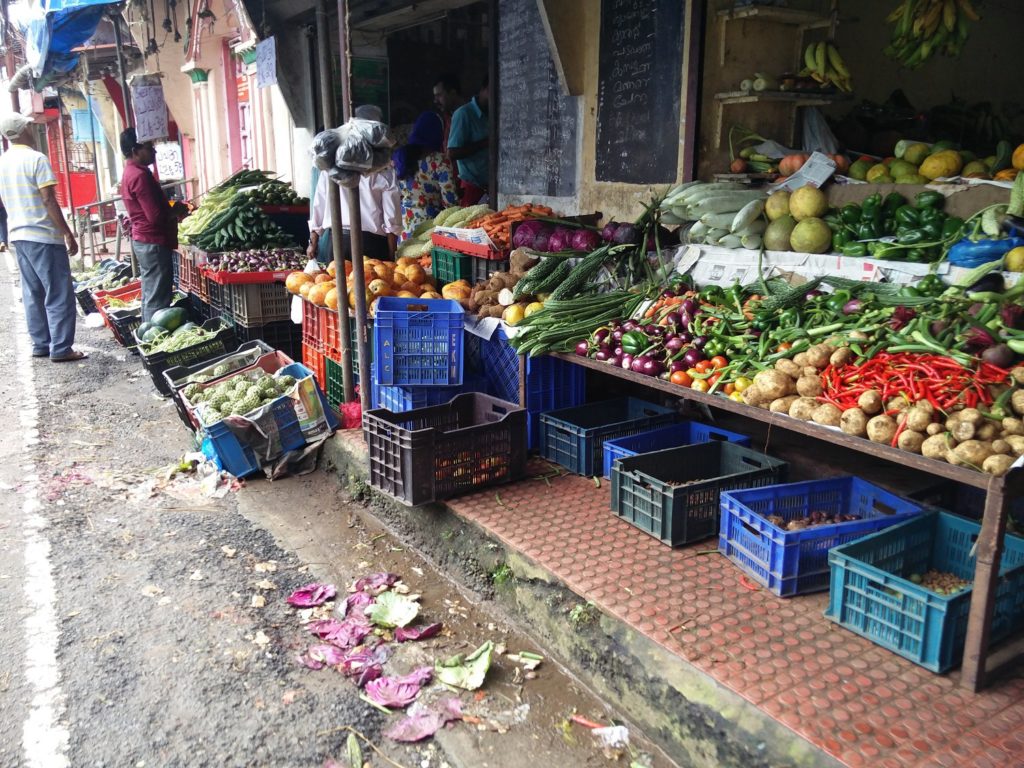 Anyway, this city can be visited in one day. There are a few spots to see, I’m thinking about the Santa Cruz Cathedral Basilica, built in 1505, at the time that Keralal was still occupied by Portugal. Very impressive cathedral. It might feel weird to see a cathedral here in India. This is a legacy of history, today 60% of the inhabitants of Kerala are Christians.

The Dutch Palace, also called Mattancherry Palace, intrigued me. A palace in the state of Kerala, I have to see that. Actually, let’s face it, it sucked. You’ll see portraits of the rajas of Kochi, paintings, some art of the area… It’s not possible to show you guys, it’s forbidden to take pictures inside the palace. But knowing it’s only 5 rupees (less than 0.10€) to get in, you can go if you have nothing else to do!

The Jew district is the area where you’ll see all the shops selling spices. There’s also a synagogue, I saw some signs with the Hebrew alphabet. Nothing special to see there, but it’s still nice to wander around the streets in this area, get in some shops…

And finally, another place where I had very high expectations, my camera was ready to take great pictures : the sunset next to the Chinese fishing nets. I went there, by the waterside, to find out the place was disgusting, a dump at the water’s edge, really! Garbage all over the floor, many plastic bags in the water… And it started raining! Very very far from what I saw on the internet! No time to whine, it’s time to see what the backwaters look like! For a thorough guide about the city, check the places to visit in Fort Kochi.

What’s that, the backwaters? Pretty simple, you basically get on a boat, and sail on a river. Something important I need to specify since we’re in India, there’s no noise when you’re sailing on the backwaters, it’s a peaceful moment. Not much noise, and from the boat, you’ll pass by villages along the backwaters, and the daily routine there : kids playing, women washing clothes, men loading stuff on their boats… 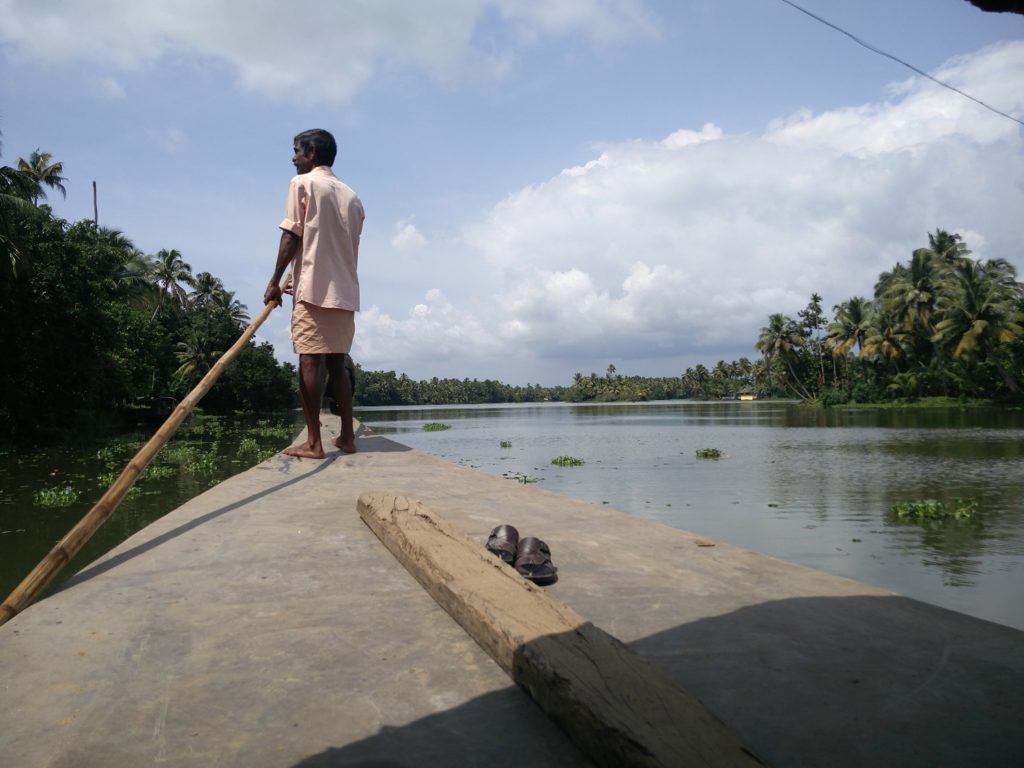 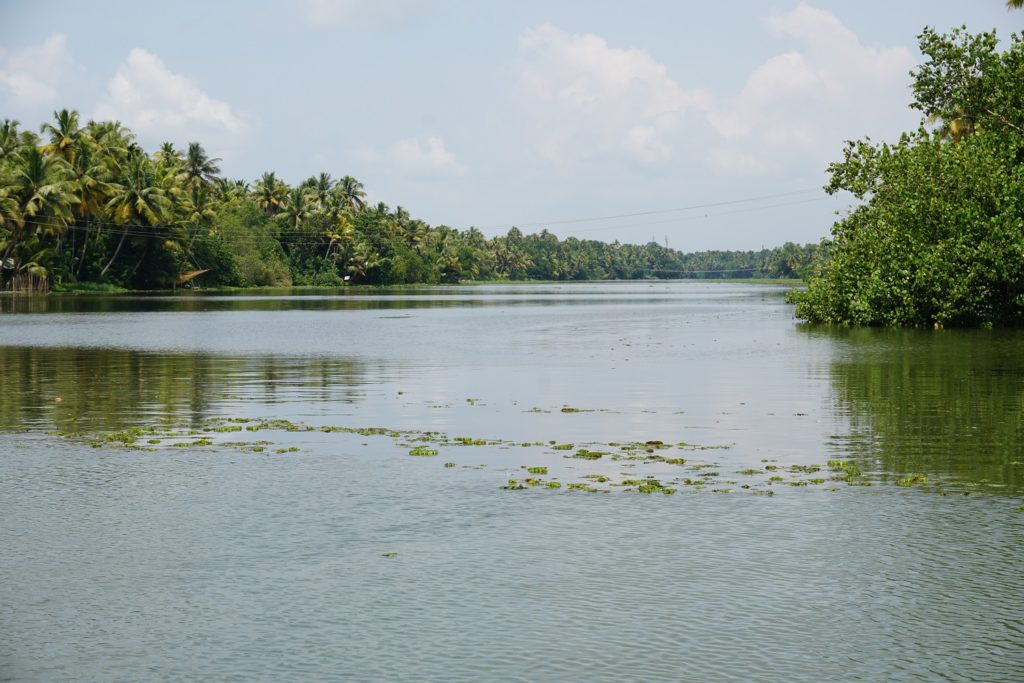 Sailing there is very enjoyable, we see beautiful landscapes, and this day without noise pollution is relaxing. We’ll stop in a village, and a family living there showed us how they were making ropes with coconut fibers. Otherwise nothing special, but I had a very good day. You’ll find all the tips at the end of the article 🙂 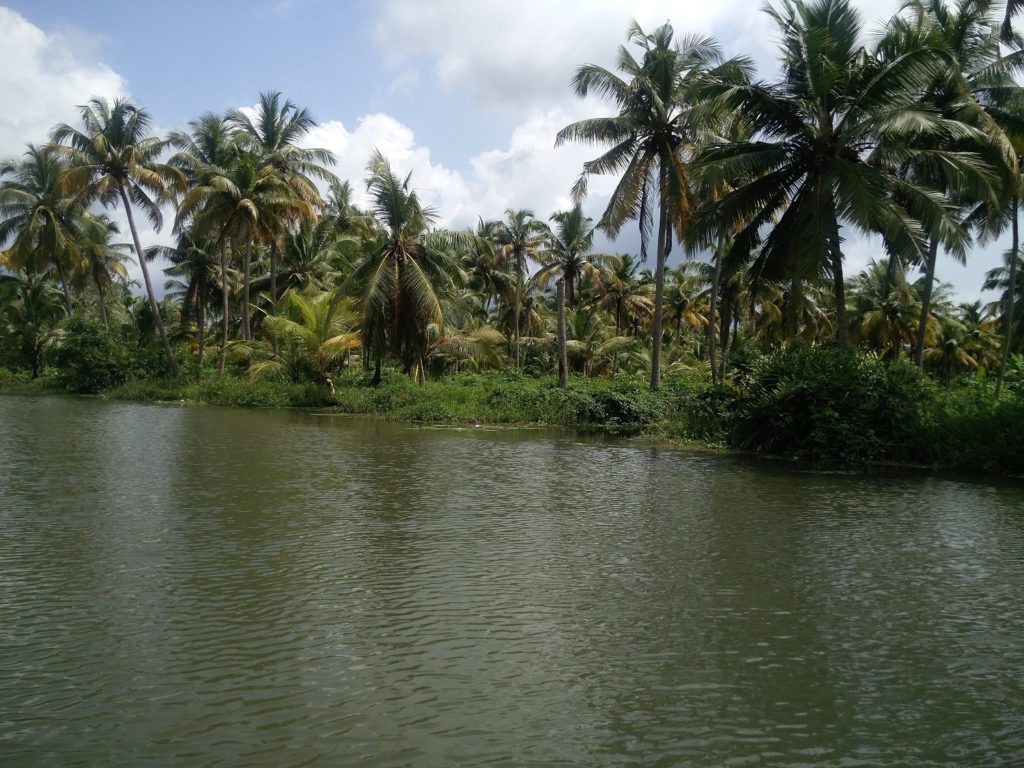 Munnar is known for one thing : its tea plantations, stretching out to the horizon. Instead of randomly wandering around the tea plantations, I decided to join an organized visit of the plantations with a guide, and it was an excellent idea! The guide taught us a lot! 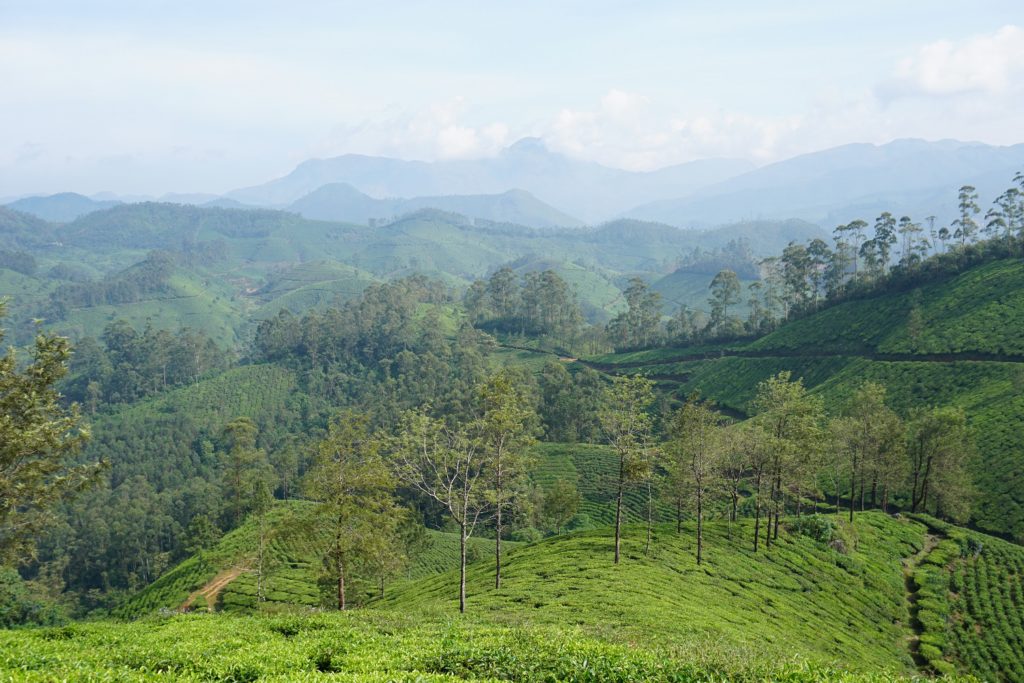 If we go further, the women work from 8am to 10:30am, then they have a 15 minutes break, and back at it again from 10:45am to noon. Then lunch break for one hour, and back to work from 1 to 5pm! The few guys harvesting work from 7am to 1pm, then they carry the tea leaves harvested in the afternoon. Being a hard work, those who work there retire at 58. I really liked this visit, it was interesting and instructive. Actually I learned even more later on the internet about the tea plantations, reading an article from a fellow travel blogger who wrote about her Munnar tea plantation tour. 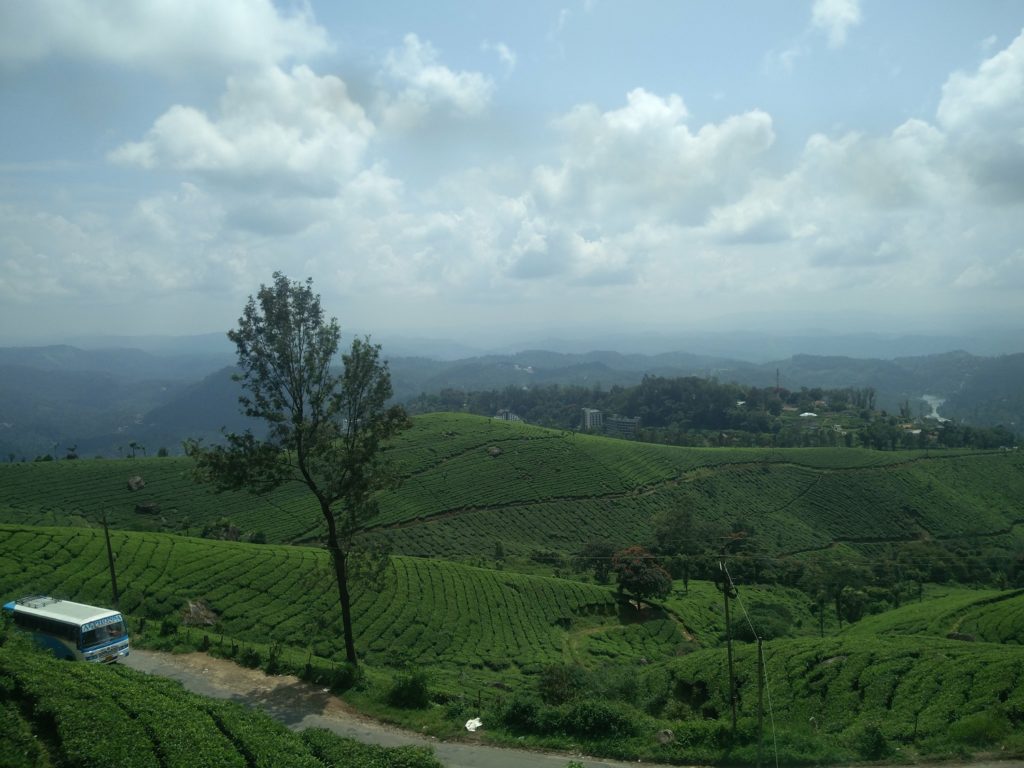 In Munnar, I also visited the Cinnamon garden, interesting walk mostly thanks to the guide we had (they’re two or three, we had the best one!). Basically we paid 100 rupees (1.30€), and for one hour, we followed the guide, walking in this garden, and he was showing us various plants, we smelled them, we sometimes tasted them, and everytime he was explaining the effects of this or that plant (this one is good if you have gastroenteritis, that one helps to heal quickly, that one is effective for headache). He was an herbalist actually! Very interesting!

Munnar was my last stop in the state of Kerala. Although I was a little bit disappointed by Kochi, I really enjoyed my stay there. People are educated, open-minded, and a lot more relaxed than in the north! I suggest you to go there if you have the opportunity!